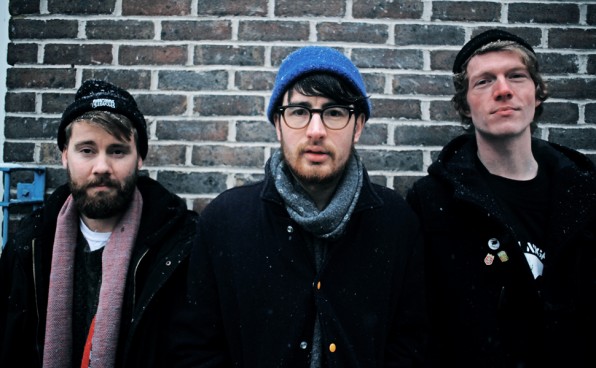 TRAAMS are Stu Hopkin (vocalist and guitarist), Leigh Padley (bassist) and Adam Stock (drums). Formed in the summer of 2011, the Texas, Chichester based trio have gifted us another EP titled ‘Cissa’ that is scheduled for release on the 14th July. We caught up with them to discuss date abduction, pubs full of dogs and the practicalities of a hot air balloon festival.

GIGSLUTZ: Hello TRAAMS. Where are you and what have you been up to this week?

Adam: Hello! I’m at home in a place called Arundel. It’s only Monday, so I’ve not been up to much but work. It was my friend Murray’s birthday at the weekend though. We pissed about in the sea for a bit and went to a pub. It was full of dogs. I got him a £5 bottle of cava.

Stu: Hey, I’ve been mainly at home in between touring. I’ve been watching the World Cup, been to a couple of galleries. Watched a couple of movies; Wolf on Wall Street (it’s great) and Short Term 12 (also great) and rehearsed for our show at BLEACH on the 12th…

Leigh: I’m in my bed in Bognor Regis and I have been working in Guildford, rehearsing in Ford, partying in Havant and watching loads of NOFX backstage passport this week.

GIGSLUTZ: You are playing Beacons Festival on 9th August. Who are you looking forward to be playing alongside?

Stu: Ah there’s loads of good bands this year, Menace Beach are friends and are so great, Girl band we played with in Denmark a while back and are really good, Speedy Ortiz, Darkside, I haven’t seen Joanna Gruesome live yet so that should be cool and obviously The Fall.

Leigh: All of ’em, but I can’t wait to see Girl Band again.

GIGSLUTZ: Richard Branson gives you a shitload of cash and asks you to curate your own festival – who would you book?

Adam: Girl Band. I’d blow the rest of the budget on some hair brained Branson inspired scheme to set it in the middle of the Atlantic. Or in a giant hot air balloon maybe.

Leigh: BigDumbFace, Little River Band & Weezer would be my headliners & I’d also get Eddy Grant, Yes & Drake on the bill.

GIGSLUTZ: Name three influences on your music, without whom you would most likely be doing something other than making music.

GIGSLUTZ: What was the first song you fell in love with and which album could you not live without?

Leigh:The first song I fell in love with was probably ‘Could You Be Loved’ by Bob Marley & the Wailers. The album I couldn’t live without would be ‘Pet Sounds’ by The Beach Boys.
Stu:  Walk this Way by Run Dmc.  I had it on tape with no name on it. So I didn’t know who it was for ages. I couldn’t live without ‘Knock Knock’ by Smog.
Adam: My first album was ‘Americana’ by the Offspring, so it was probably something like ‘Pretty Fly For A White Guy’. It’s become a little bit of a habit to listen to ‘Trans Europa Express’ every time we’re across the channel, so probably that. I think I’d be alright though.

GIGSLUTZ: Must be pretty dull living in a small town. What’s the wildest thing you’ve ever done to amuse yourselves?

Adam: My mates and I went through a phase of hunting down and abducting each other while on dates or with our families and stuff. It was fucking stupid.
Stu: Sometimes we’re allowed to stay out after 9pm and we a roll hula hoop through the streets with sticks. That and the maypole dancing. Wild times.
Leigh: Me and my mates once tried to all fit in one phone box, there was 6 of us, ah it was illicit.

GIGSLUTZ: Iggy Pop asks you to do cover for a tribute album he’s putting together. Which song do you pick?

GIGSLUTZ: What’s next for TRAAMS?

Adam: Festival season! Wayooooo!
Stu:Festivals, more touring and recording a new album at the end of the year.
Leigh: We have a new EP out super soon, we have some great festival slots this summer then we’re gonna book more shows for later in the year and think about getting into the studio at some point to lay the smackdown on some new material.

TRACK REVIEW: Peace ‘Lost on Me’