Twisted Wheel are back! We catch up with frontman Jonny Brown to talk addiction, being serenaded by Noel Gallagher, their forthcoming massive tour and loads more….

Hi Jonny, hope you are good, how does it feel to be back?

Brilliant! Can’t beat getting back on track with what your meant to be doing in life, can you.

What prompted you to “get back in the chair”, so to speak?

Well I must take back the rein to my throne and take back all what’s mine.  All I can say Is this more of a force of nature than a planned script

How have you filled your time since the split?

I’ve had some quite low points over the last few years. Suffering from bad addiction I’ve spent much time trying to get clean and relapsing. In between this though I made an electro hip hop album yet to be heard. I’ve written quite a few songs and raps.  Experimented out of my comfort zone whilst fighting demons with my left toe. Most importantly I have put together an ace new album for Twisted Wheel that will be released in October 2018 – it’s a killer

Ace! How will Twisted Wheel MKII differ from the first time around?

Well technically this is MK 5, but to the point we are like a fine wine ageing with time. The new stuff is classic rock n roll music. It will live forever and blow the cobwebs to kingdom come.

You’ve got a massive tour lined up and are an amazing live band, what do you love about playing live?

I love playing live. You can’t beat the atmosphere at some of our gigs. I like getting up close as possible with the crowd and I thrive or sharing the magic energy. Also, it feels good to be on the stage and respected by an audience. You can’t take that for granted can you ?

The new tour is the “Snakes & Ladders” tour – what is the story behind the name?

The tour is named after an old song of mine called ‘Snakes and Ladders’. It’s about the game of life, how you rise and fall between the years of life. It’s sort of sums up my life anyway and the bands history. 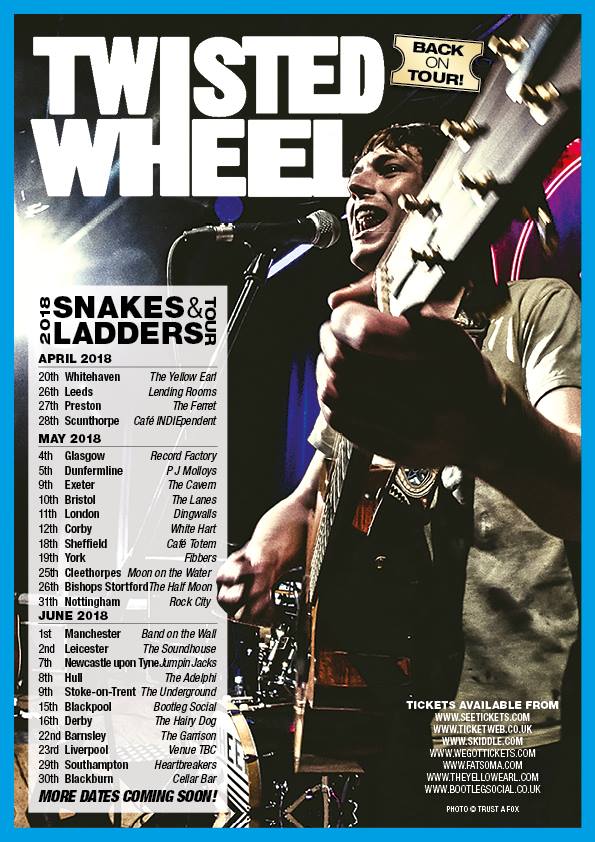 You supported some huge names first time around such as Oasis and Weller – is there one particular highlight of those dates that sticks out to you?

What is your most “rock n roll” tale of that time?

Probably sat in Noel Gallagher’s car with our girlfriends and him singing Talk Tonight for us.

Also, when we received a 48 hour ban from our own beautiful City of Manchester for inciting a riot. We had just played to a sellout audience at the Ritz and after the gig had finished  I walked through the to the venues entrance with my acoustic guitar to play a couple of impromptu songs as fans were still congregating and singing our tunes.

When they saw me, the crowd literally picked me up and carried me down the road with hundreds in tow. It brought traffic to a standstill with fans climbing over cars, buses and even over a film crews vehicle.

The police arrived with sirens blaring so we decided to disappear inside the building and they came searching for us in this massive venue with lots of corridors. We thought we had given them the slip but they had gone into the CCTV control room and could see where we were hiding. We were always crap at hide and seek!!

Anyway to cut the story short they were going to charge us for inciting a riot, damage to vehicles and property and a number of other charges. After explaining our side of the event that had taken place they eventually agreed to drop charges but gave us a 48 hr ban from the city.

If we were seen anywhere within 20 miles of Manchester they would put that charges back in place and it would have cost us some serious money so we all went straight home by train.

It really destroyed us that night, as it was one of the best gigs we had ever played plus we had a massive aftershow arranged which went ahead without any of the band attending. We were all sat at home many miles away with everyone else having it large.

How do you find the Manchester music scene these days. Are there any bands out there you particularly like?

Manchester always has a good music scene with someone new in the frame most months.

There some good bands about but it’s all about Twisted Wheel as far as I’m concerned.

Currently like Sauce, The New York Tourists, The Jade Assembly, The Darlies, Jack Fletcher Band  and many others – some not specifically from Manchester, but doing the rounds and supporting us in the North of England

What do you think of modern day mainstream music?

Its alright, nothings turning my head at the moment, but that could change tomorrow

Are you planning to release any new music to go with the tour?

Yes we are currently recording the new album. We will be playing a few new tunes on this tour and dropping an EP late April – again in August, with the new Album being released in late Sept – early Oct. The album is going to be a belter,  hopefully the best so far

What’s next after the tour – are there any festival dates planned?

Thanks Jonny – we will look forward to the tour