Jack White is a man of many faces. From the fresh-faced early days of the White Stripes and the infamous Alicia Keys/James Bond/‘Zorro on doughnuts’ phase (thanks for that one, Noel Gallagher), to the Raconteurs and the Dead Weather, and now in his current role as gothic solo artist and guardian of the vinyl record industry, White has always done exactly what he wanted – with meticulous attention to detail. This is plain to see before he even sets foot on stage at the Hammersmith Apollo, which is decked out completely in white, right down to the cladding on the amps. The whole scene is bathed in a wash of inky-blue light, evoking the cover art from 2012’s Blunderbuss and this year’s follow-up Lazaretto. Black-screened 1970s TV monitors leap into life with static and geometric patterns the second White explodes onto the stage, leaping around ecstatically in a roar of feedback before tearing into ‘Sixteen Saltines’. It’s a savage, raw performance, but above all it just sounds incredibly fresh – hard to believe the guy’s knocking on 40.

Another crescendo of feedback soon gives way to a gutsy ‘Dead Leaves and the Dirty Ground’, and the first huge cheers of the night. The band keep it fast and heavy, and are almost overpowered by the volume of some 3,000 or so voices singing back at them. It’s bluesy and punky, and full of life and vitality. This is what makes Jack White one of the most exciting performers out there today – yes, he’s got a back catalogue that most bands can only dream of, but above all he has an almost compulsive passion for what he’s doing. He spends most of tonight’s two-hour set leaping around like a frog on a hotplate, barely pausing for breath.

The set segues seamlessly through solo material and a few much-loved White Stripes tracks. There’s an extended version of ‘Lazaretto’, during which the stage is lit up like some kind of gothic funfair, followed by an exuberant, uber-country version of ‘Hotel Yorba’, complete with a violin hoe-down and a mass singalong. White’s band seem as fired up by the whole thing as he does, not least a particularly awesome female violinist who shimmies her way through the set, even sharing lead vocals with White on ‘Temporary Ground’. Things take an almost Cramps-esque turn on ‘Ramblin’ Man’, before unexpected airings of ‘Icky Thump’ and ‘I’m Slowly Turning Into You’, and a fearsome closing version of ‘Ball and Biscuit’. 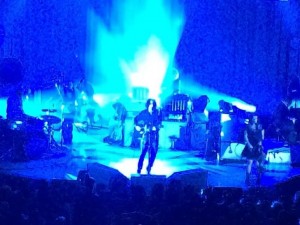 The curtain comes down, still bathed in that blue light. A few minutes pass by; longer than we’re used to these days. People start getting antsy. No one’s ready to go home yet. There’s stomping, clapping, whistling and whooping – a restless mob with no intention of traipsing back to the Piccadilly line just yet. Fortunately Mr White is of the same mind, and finally he’s back on stage and ripping through not one, not two, but NINE encore tracks, still with as much energy as he had at 9pm. If the first part of the set was one for the hardcore fans then this is when he shows that he knows how to play The Hits; Dead Weather track ‘Blue Blood Blues’ gets an outing, as do the Raconteurs’ ‘Broken Boy Soldier’ and ‘Steady As She Goes’, with White joking that the latter was ‘a Christmas Number One here, or something’. It’s a cheeky dig that seems to sail over the heads of some of the crowd in the balcony, who finally get on their feet for closer ‘Seven Nation Army’. Down below I can see an uncontrollable churn of people – definitely one of the most violent moshpits I’ve seen in a long time, not to mention the one I’d most like to be in.

It’s been an unforgettable night. Jack White has given it his all, reveling in the explosive chemistry between him and the band, not to mention the sheer determination of his audience to relish every second. With the ringing of feedback and cheers still in the air, the man of many faces stands aloft on a speaker, guitar raised triumphantly in the air, a look of genuine gratitude on his face. He’ll be back in November for a date at the O2 but I think even he knows, this’ll be a hard one to beat.