JAMES are set to headline the opening night of Heritage Live’s series of summer concerts with one of the first post-lockdown outdoor shows in the UK and the first in London, on Thursday 24th June, in the beautiful setting of Kenwood on London’s Hampstead Heath.

The celebrated Shiiine On indie DJs will get the party started in style with gates opening at 3 pm for a full afternoon and evening of first-class live entertainment.

“After 15 months of lockdown and restrictions, this event really will be a resounding statement that live music is back in our lives at last!  Audiences, artists, staff and crew have been itching to get back to what they love and I’ve no doubt this will be a fantastic celebration of what’s great about live music! It certainly will be a concert that’s remembered for many years to come and we really can’t wait!”

“Right now James are in a fully tested Covid bubble rehearsing for this concert. You never really value some things until you’ve lost them -so now, to be playing together in a room, to be coming to play to an audience, to be working with all the people who put on these amazing events, things we used to take for granted – we are re-appreciating in a deep way. As one of the first concerts out of lockdown, this will be a massive celebration. Let’s have a party!”

James’s last tour saw them play 86 shows in 14 countries, including a sell-out concert at the legendary Greek Theatre in Los Angeles. The reason is simple: James live are a force to be reckoned with. Their recent homespun live album – Live in Extraordinary Times – debuted at number one in the UK midweek charts.

The Mancunians’ soon to be released 16th studio album, All The Colours Of You, described by Uncut Magazine as ‘an album that thrums with sense of urgency both timely and slightly remarkable for a band entering its 40th year’, is a widescreen LP that takes the band into new sonic territory and fans of James can expect to hear new material from the new album at Heritage Live alongside their rich catalogue of festival friendly hits which includes ‘Sit Down’, ‘Laid’, ‘She’s a Star’, ‘Say Something’ and many, many more. 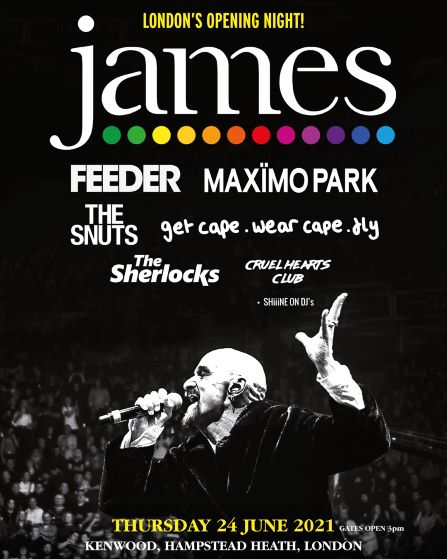 Feeder are ready to come full circle. More than two decades after their first show the band are reinvigorated, tapping into the essential, primal energy that first inspired them. Their latest album Tallulah is evidence of this – snappy song writing, expertly produced, and completely natural, completely organic. Tallulah opens a bold new chapter, one that thirsts for fresh challenges.

Since forming in 1994, the Welsh band have released ten studio albums, including Echo Park, Comfort of Sound and Renegades, and are responsible for rock anthems including ‘Just the Way I’m Feeling’, ‘Tumble and Fall’, ‘Just a Day’, ‘Feeling a Moment’ and ‘Buck Rogers’.

Meanwhile, Newcastle’s Maxïmo Park are no strangers to the festival circuit. Currently riding high from their latest record, Nature Always Wins – which peaked at No.2 in the charts this year – the band’s legendary explosive performances will be once again led by their talisman Paul Smith when they head to the capital in June.

The band, responsible for indie anthems ‘Apply Some Pressure’, ‘Our Velocity’ and ‘Books from Boxes’ first burst onto the scene with 2005’s landmark debut album ‘A Certain Trigger’ and will once again take centre stage for this eagerly anticipated return to live festival music.

The Snuts are giving indie music a much-needed overhaul. The Scottish band scored a No.1 album in April with their genre-merging debut W.L.

As NME puts it: “Come festival season, should we have one, you sense that this genre-hopping gamble will pay off; it’s more ample proof that guitar music doesn’t just have a place in 2021, but that listeners are in tune enough to embrace and support its variety.”

Tickets will be in high demand and all ticket applicants must Pre-register for tickets at www.heritagelive.net  to buy tickets in the Presale from 9am, Tuesday 25th May.

Tickets go on General Sale from 9am Thursday 27th May.

This Feeling Track of the Day: The Sonder ‘Music (Is All I Need)’

INTERVIEW: The Yardbirds Jim McCarty talks about Roger the Engineer