As you stroll through the gates of Lowther Deer Park, seeing the sun-kissed rolling hillside covered in tents, accompanied with the hum of expectant festival goers, you instinctively sense this is going to be another special year for Kendal Calling.

The Thursday is billed as being the tamest of the days, with fewer acts and no late night events, but tell that to the early arriving punters and you’ll be laughed at. This festival has expertly bought two crowds together. This is a place where families feel at home, but so do swaying teens, all hearing the call of the glow tent. And we’re all here for one reason, to have a special weekend.

Gerry Cinnamon, fresh of his TRNSMT set which opened many more eyes to him, takes to yet another main stage, looking as at home as he did in Glasgow last month. Unsurprisingly ‘Belter’ receives the best reception from the already hazy crowd, but he is much more than a one song man. With a forty minute set to deal with he picks through the best tracks from debut album Erratic Cinematic, and the result is the best opening to a festival I have witnessed in a long time.

Hacienda Classical turns out to be a genius booking to close this first night. Without the wide range of festivities the weekend offers, these acid tinted classic performed in a way like never before really bridges the gap between the variety of music lovers all gathering in front of the main stage. Peter Hook joins the packed stage to perform ‘Blue Monday’ before Black Box classic ‘Ride on Time’ rings loud through the fields and forests to bring the first night of music to its crescendo. Breathtaking.

With no late stages open on this first night it’s down to campsite parties to take us through to the sobering sunlight of Friday morning, the day we see the whole of the rearranged site for the first time. 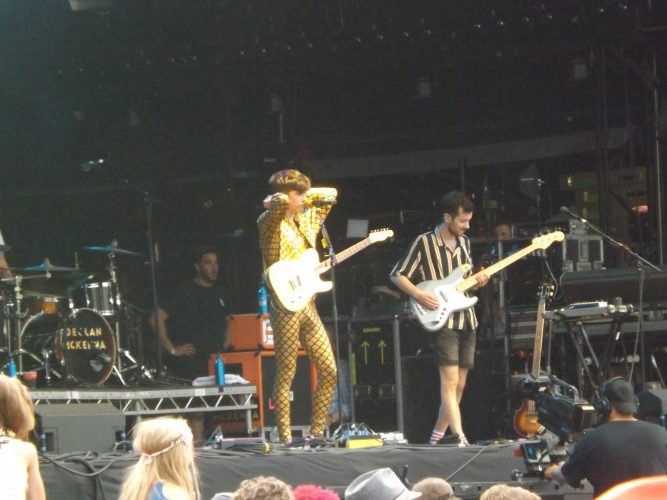 The first highlight of the day comes in the form of Declan McKenna, who draws a full crowd to the main stage. The whole package of the set fits effortlessly into the situation. The jangling guitars, the soft vocals, and the blazing sun reflecting off his all gold suit as he dances across the stage is a simply perfect remedy for the antics of the night before. This is very much a pallet cleanser for some of the big names to come, but it works to a tee.

White Lies also pack out centre field for their set which spans all three album, opening with debut album ‘To Lose My Life’s title track, and pouring through the dark overtones of that album as well as the light, floaty keys driven hits from 2016’s ‘Friends’. Drummer Jack Lawrence-Brown spoke with us before the set, and that interview will be up on Gigslutz soon. 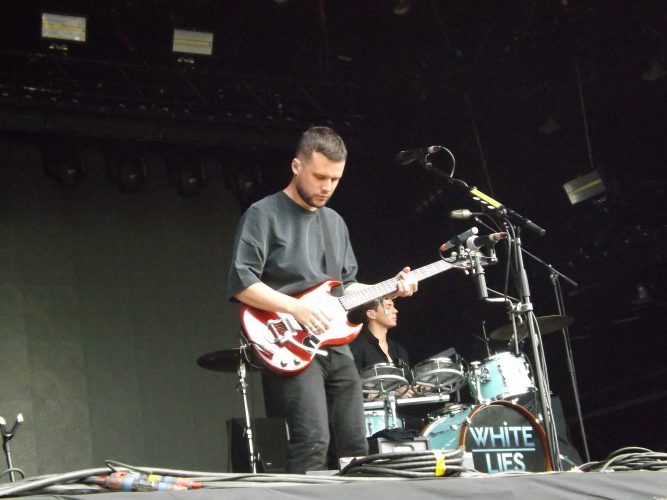 James are perhaps the most anticipated act of the weekend, and despite the likes of ‘Laid’, ‘Sometimes’ and an acoustic version of biggest hit ‘Sit down’ bringing a feeling of true unity to the fields, the crowd are left wanting more. Several new songs are included over the likes of Say Something, She’s a Star, Born of Frustration… The list goes on. A great performance, but not the festival setlist we expected.

Catfish & The Bottlemen headline the main stage, and everyone know what to expect from them by now. The place where the festival is really coming to life and showing its true unique colours is in the woodlands. Taking to the stage to close the night here are Elvana, a tribute to the songs of Nirvana, fronted by Elvis. “Sometimes if you’re lucky I sound a little like Kurt Cobain” ‘The King proudly exclaims, “But one thing I think we can agree on is I sound fucking nothing like Elvis Pressley”, before hurling into a mash up of ‘In The Ghetto’ and ‘Come as you are’. The most Kendal Calling thing you will ever see, and the crowd loved every second.

Tonight’s choice of late night entertainment comes in the form of The Red Stars, a bunker like structure hidden away in the further point of the forest. Upon approach you have to glance twice to realise this is even a real part of the festival, with the spacemen guarding the door leaving you questioning if your head is more frazzled than you anticipated. Inside you find a net covering a small disco, more spacemen, aliens, and messages of comradeship scribbled on the wall. You dance to the early hours as your eyes chase the lights and the creatures all inhabiting this strangest of events. Then finally, it’s over, and we’re begrudgingly back to the normality of the campsite. 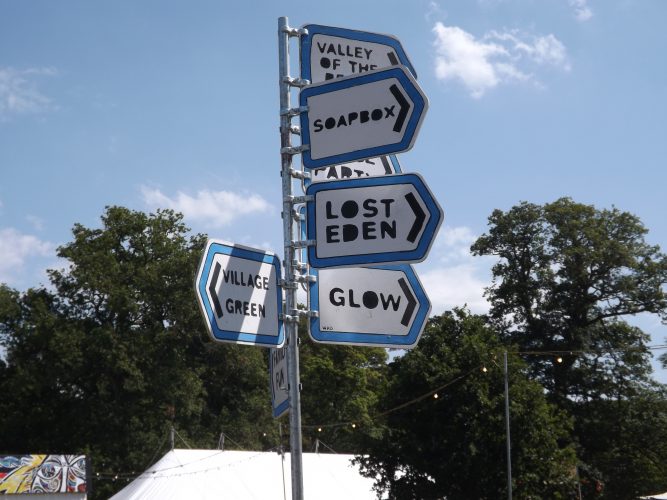 The Blinders get Saturday underway with their revolutionary punk-indie mix, but the real highlight of the day comes through the chilled out vibes of New York’s Fun Lovin’ Criminals. We even get a break in the seemingly set in downpour as they swoosh through a set incorporating everything from jazz to blues right through to funk. “This next song is probably the reason we’re here” announces Huey as he thanks the sopping wet crowd before the famed opening drumbeat of ‘Scooby Snacks’ reverbs around the field, providing possibly the most memorable moment of the weekend.

Plan B’s stage name became oddly apt in the week, stepping in at the last moment to replace Run DMC in the headline slot for Saturday night, and despite being a little heavy on the new songs in the set you can’t help but feel this was a change for the better. The field first sparks into life at the exclamation of “Hit me with that rhythm stick!” as the oh so familiar beat of ‘She Said’ rings out. Elsewhere, Twisted Wheel bring the evenings proceedings to an end in the House Party with a set that’s equal parts impressive and sweaty.

Tonight’s late night endeavors take place in the Strongbow Yard. Fierce flashes of flame shoot above you from the ten foot arrows lodged into the waterlogged grass as the tunes rain down from warehouse like DJ booth above, not even the consistent rain can dampen the spirits of thousands as Saturday becomes Sunday, and begrudgingly, we’re into the last day of our experience. 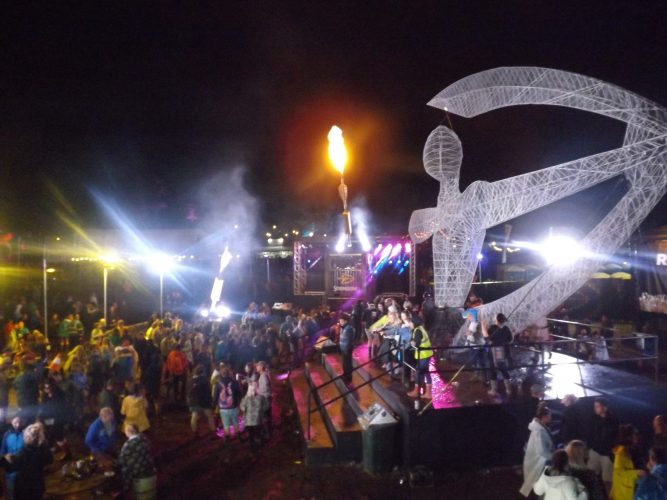 Vida we’re one of our tips before the festival, and with the help of some rain and an impressive Scottish following they have packed out the house party early on. Unlike most we have seen on this stage, people have not just wandered in for shelter or to give somebody a chance, this crowd are here for the Alloa boys. Their set which spans their short career so far comes to a close with ‘Fade Away’, the chorus of which echoes back from the low hanging roof, further emphasising the love their already growing following has developed.

Back outside during a brief halt in the weather and Peter Hook & The Light are brightening up the main stage with their set which encompasses the biggest hits of Joy Division and New Order. ‘Transmission’ and ‘Blue Monday’ begin to stir some life into a miserable day, before ‘Love Will Tear Us Apart’ provides what few will deny to be one of the highlights of the weekend.

Finally, after days of blazing sunshine, torrential rain, and some unforgettable performances, it’s time for The Libertines to bring everything to a head. Carl, Pete and co are in fine form, forcing the audience straight into pandemonium with opener ‘Horrorshow’. The set has great balance, with the inclusion of a few songs from 2015’s Anthems for Doomed Youth, but with the core of the set made up of the many anthems they have in their back catalogue. The encore, beginning with a swooning ‘Music When The Lights Go Out’, then provides the ending the weekend has deserved, with ‘Up The Bracket’, ‘I Get Along’ and finally, the crescendo of our Kendal 2018 experience, ‘Don’t Look Back Into The Sun’.

As you walk back, through the mud, past the crowds clinging onto the last few second of their time in the fields, there is nothing more we could have wished for. All that is left now is to hope Kendal Calling 2019 comes round quickly, and they can replicate this melting pot of scenes they always seem to get so right.

This Feeling Track of the Day : The Coral ‘After The Fair’

This Feeling Track of the Day : Sisteray ‘Wannabes’