Kings of Leon are one of those bands that make me want to drink whiskey and generally feel pretty awesome. This was more of Pimms occasion.

I don’t know what it was, but if I was a betting man I would lay the blame at the door of the crowd.  Although Nathan’s Alan Partridge-esque leather gloves may have had something to do with it. I jest. Sort of. Are those a no go in drummer land? Surely they are. The gloved footballer equivalent. I dunno. Lettuce know if you have an opinion on that. Or maybe it was the overall Sunday dress. I like my band to look like a band, a tad dangerous, not chucking any old t shirt on for a drive round to their Mum’s. But Caleb’s phenomenal boots more than made up for it. Geezer. Redneck muh friggin geezer. Worth noting that the crowd were i tunes competition winners so not necessarily Kings fans. But still, it was painful in its sterility.

The band walked on to a rapturous applause though, and kicked off with the recent single ‘Supersoaker’. I must admit I only heard it once and have been hoping it’s a grower. It still may be.

My favourite Kings album was the second one, Aha Shake Heartbreak, and they slammed in with ‘King of The Rodeo’. Banging. The band rather smoothly began to venture through their mighty back catalogue, ‘Notion’ at last starting to get the competition winners moving out of their static state. Although they remained rooted to their seats.

The band seemed to pick up on the nonchalance of the crowd and seemed decidedly unmoved by what must have been a 200k performance fee (apparently).

‘Crawl’ was as ever, epic, dirty, aggressive and razor clad. But still the audience in the seats around the perimeter remained on their hides. Crawl still hits as hard as it did when I first heard it in the 12 Bar in Denmark St, rooted to the spot thinking to myself “what the…”. One of the new tracks – ‘Don’t Matter’ gave me faith in the new album. Real heavy riffs ploughing through the venue. Someone commented that it had a Status Quo riff feel about it! In a good way. 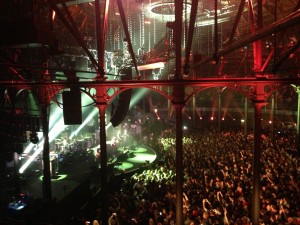 Caleb made an effort to enliven the crowd, emphasising the words “London swings!!” in an attempt to get the place moving but alas, to no avail. They sailed through ‘Back Down South’, ‘Pyro’, and into another new track called ‘Family Tree’. Now I’m not intimating anything here, but they are from the deep south, and a chorus containing words along the line of “I’m your family tree, I know your A to Z, lay your hands on me”. Errrm, righto. Sure got a perty mouth though. It had a distinct Zutons feel to it too, seriously catchy chorus and fairly poppy for the band.

Most bands would give their right arm to have one of these gems in their entire repertoire, the Kings just kept chucking em out. ‘Four Kicks’ and ‘Molly’s Chamber’ were storming renditions and the band seemed to get into a groove over these numbers.

Caleb embarked on a speech that lasted around 3 minutes but I don’t think anyone could understand what he said. Still, I’m sure he’d say the same about me.

They trotted off and loped back on for the encore. The inimitable ‘Black Thumbnail’, an ode to the dark arts of loving women and straying off course, an open letter to the beast within. Pure class. If an alien landed last night and asked to hear a rock ‘n’ roll tune, that would tick the box. (I wonder though if Caleb’s missus skips that one when in the car?). 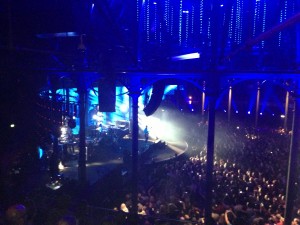 The gig was signed off with ‘Sex on Fire’ which had every female pair of hands in the air. WHERE WERE YOU BEFORE THAT TRACK?!! Man they can pen a tune. To pick a handful of tracks from that back catalogue must surely instigate a traditional Followill fist fest.

Despite a rather low-key affair, the songs are awesome still, the band tight as you like, the venue as resplendent as ever, and I still won’t have a bad word said about the Kings. In fact I thank my lucky stars that they’ve graced stages when I’ve been there to witness it.

Bring on the ‘Mechanical Bull’ and the whiskey to go with it.

Neo-Soul magic from THE INTERNET