Every day during September a different artist or band has taken over Camden’s Roundhouse as part of the iTunes Festival and on Friday night it was the turn of Grammy award winning, American singer/songwriter, Lenny Kravitz.

Wasting no time and dressed in a black leather jacket and scarf combo, Kravitz entered the stage to a hugely positive reception from the packed out crowd and exploded straight into the lively, dynamic ‘Dirty White Boots’, a track taken from his recently released album Strut. Kravitz was accompanied on stage by a hugely talented band consisting of a lead guitarist, three backing singers, a keyboard/organ player, two saxophonists, a trumpeter/flautist and distinguished session musician Gail Ann Dorsey on bass with the band regularly taking their individual turns in the spotlight throughout the course of the evening, occasionally playing extended solos. 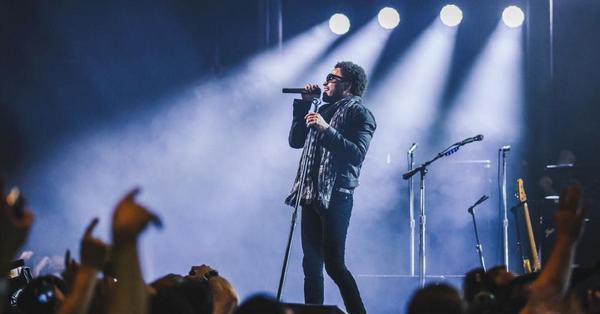 The setlist contained tracks from across Kravitz’s illustrious 26 year career and included such hits as ‘Are You Gonna Go My Way?’, ‘It Ain’t over Til It’s Over’ and ‘American Woman’ alongside new tracks ‘Strut’ and ‘New York City’, but it was during ‘Let Love Rule’, Kravitz’s first ever release from back in 1989, that the crowd reached fever pitch. Whilst performing the track and encouraging as much crowd participation as possible, Kravitz decided he would wade through the crowd and climb up onto the camera rigging at the back of the Roundhouse and proceeded to sing with the raucous crowd from his own version of the stage. Whilst his band repeatedly played the chorus for ‘Let Love Rule’ for around 5 minutes, Kravitz and the three or four members of his security team marched straight through the centre of the crowd, giving everyone in attendance a far closer view of their hero than they had imagined when they walked through the venue doors before the show.

After a short backstage breather, which must’ve included a little sit down as he had done a lot of wandering around, Kravitz returned to the stage and ended on one of his most successful songs to date, ‘Fly Away’ which ensured that the crowd were left with the vision of the main man at the top of his game and went home with the song stuck in their heads, with numerous groups of fans heard reciting the lyrics to the track outside the venue, albeit not as coherently or tunefully as Mr Kravitz had performed it moments earlier.

With his latest album only a few days old, many gig-goers who hadn’t yet made the purchase will have been persuaded into doing so with Kravitz pulling out a performance from the top drawer and reminding everyone why he is the only man in history to win a Grammy for Best Male Rock Vocal Performance four years in a row!