By name and by nature, Bestival has become one of the UK’s most loved festivals, and closed 2014’s season in its now renowned style, where castaways and natives joined forces to create the ultimate desert island disco. With huge hints of Glastonbury’s bohemian vibe, a splash of the Secret Garden Party’s quirkiness and the sort of dance line-up that only Rob Da Bank could curate, the eleventh birthday was a joyous success, providing the sorts of memories that are only enhanced by fancy dress and glitter. Here are eight highlights that prove why Bestival 2014 really was the best: 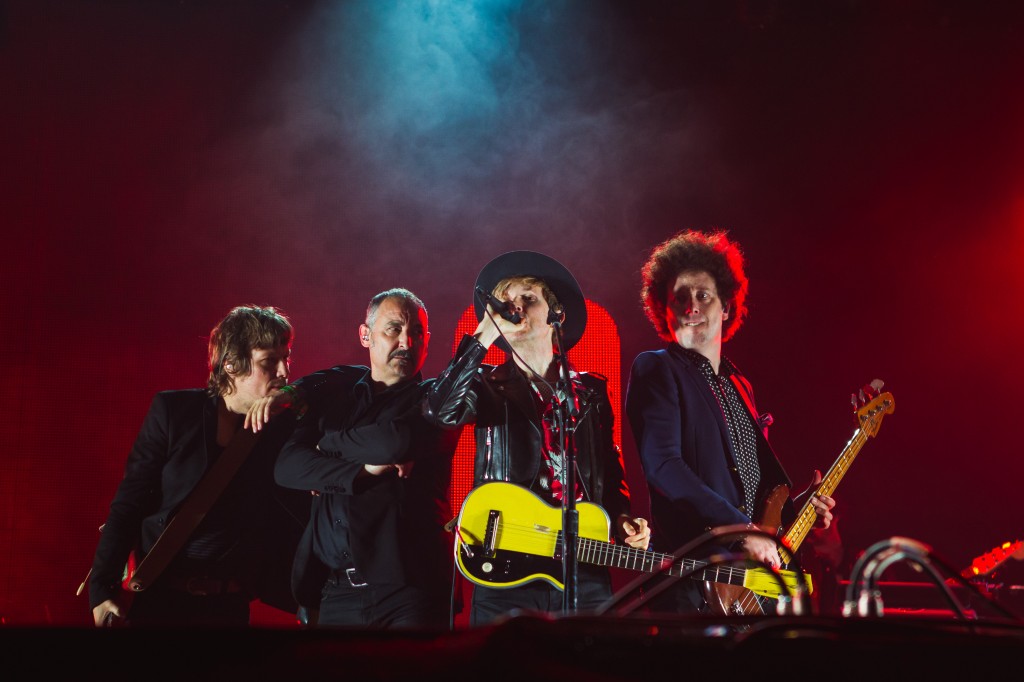 Unofficial-but-sort-of Thursday night headliner Beck had the Big Top bursting at the seams, offering a set list that spanned his two decades of genre defying tracks. Highlights came in the form of legendary lo-fi anthems ‘Loser’ and ‘Gamma Ray’, the minimalistic, stunning sweeps of ‘Wave’ from recent release Morning Phase, and the electronic mystique of ‘Get Real Paid’. An actual weekend headline slot must now, ahem, Beckon. 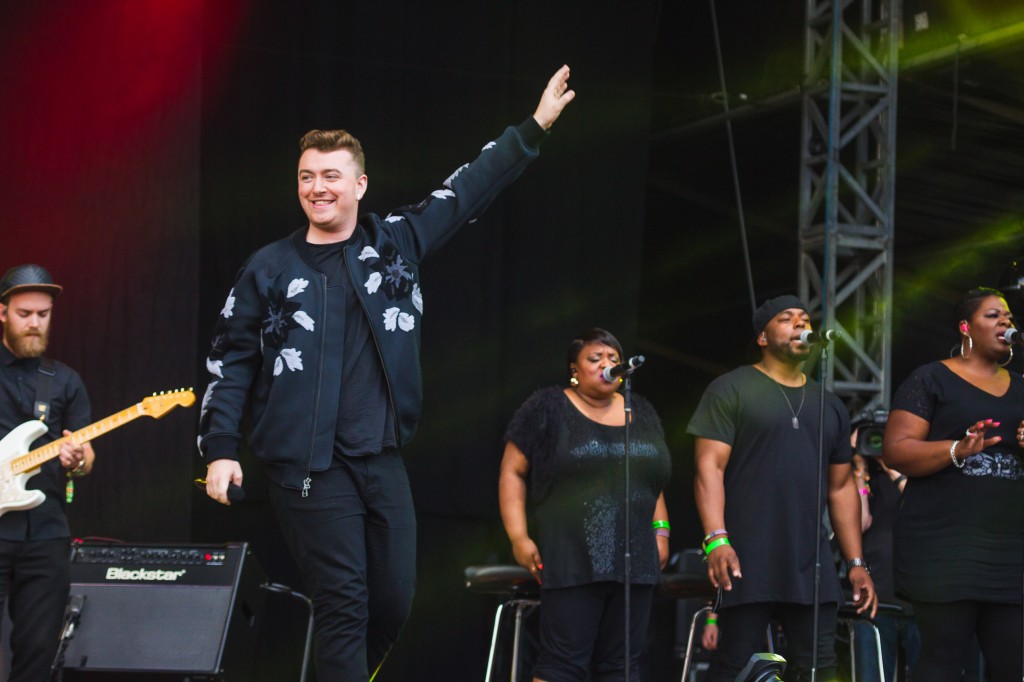 With an afternoon spot on the main stage, Sam Smith’s ballad-heavy debut could have fallen flat on a sun-soaked crowd requiring something to dance to. That wasn’t the case, however, as Smith’s incredible vocal washed over the audience like a wave, rolling earlier garage-tinged efforts and an Arctic Monkeys cover (‘Do I Wanna Know?’) in with his own tales of heartbreak. Even better, Sam looked overwhelmed by the size of the crowd and their reactions, which is always nice to see rather than those rock robots who feed on screams. 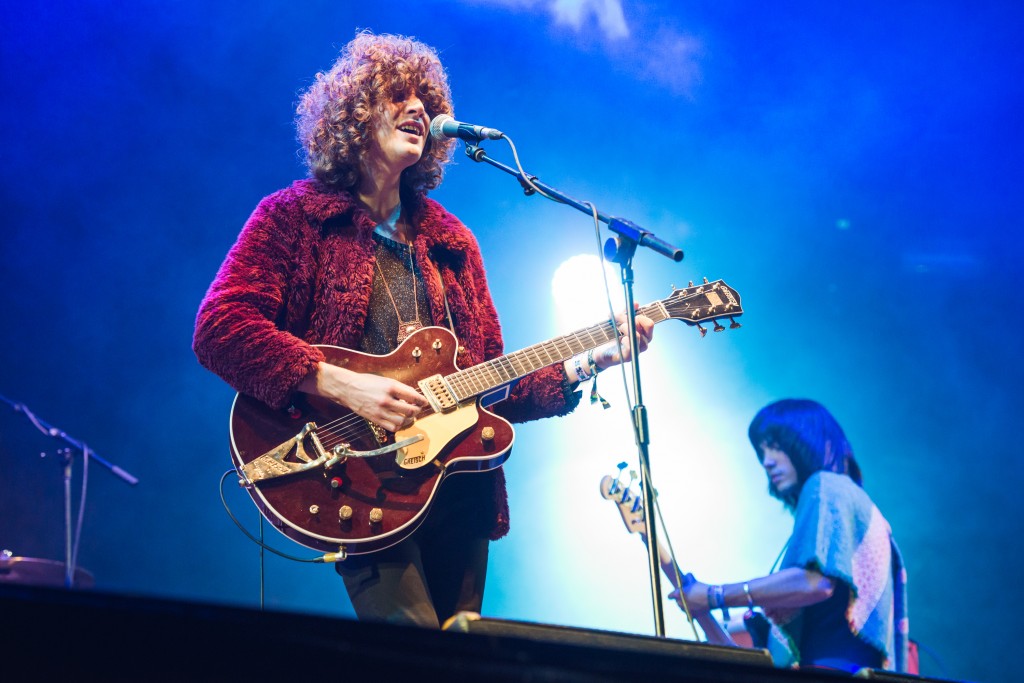 Despite the fact that they appear to have been touring non-stop since the beginning of time – when actual temples were actual buildings – Temples provided a seemingly effortless, energetic set, made up of their psychedelic charms from debut offering Sun Structures. From the T-Rex bomp of ‘Keep In The Dark’ through to the space-age swirls of ‘Colours To Life’ and rich, echoed walls of sound from ‘Move With The Seasons’, they really should stop at some point and head back into that homemade studio for album #2. But not during Bestival time. 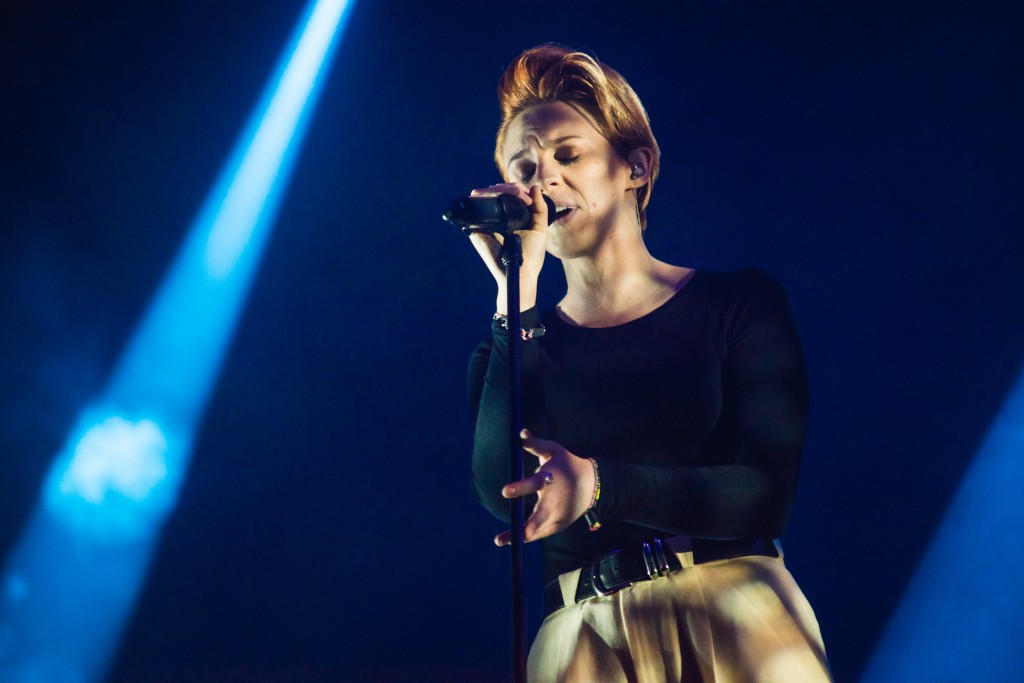 With her second album, Trouble In Paradise, La Roux provided a mesmerising take on funky electro-pop, throwing disco into a sound which created lead-single ‘Uptown Downtown’, Balearic ballad ‘Let Me Down Gently’ and the 70s-esque ‘Kiss And Not Tell’, all of which sounded flawless live. Backed by a new band but without original partner Ben Langmaid, the set was perfection, with every beat and each note sounding as it does on the album, yet given that extra live edge. Old favourites ‘Bulletproof’ and ‘In For The Kill’ segued nicely into the set too. 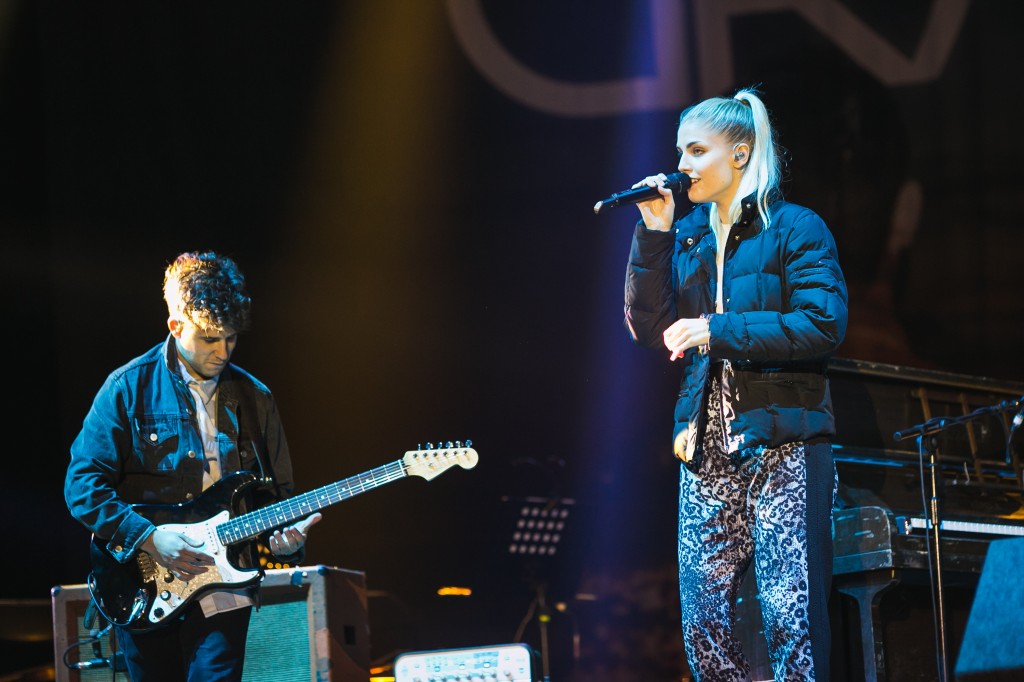 In 2012 The XX played the headline “support slot” – if you will – which shifted the energy of the crowd down a gear via minimalistic offerings more often associated with earlier sets on smaller stages. This year London Grammar were challenged with the same slot which once again just worked because, well, how can anything so stunning be wrong? Hannah Reid’s rich vocal is arguably one of the most emotive voices currently recording, drenching the trio’s minimalistic beats with melodies that cause goosebumps, tears and smiles in unison. This was a truly stunning set, perhaps the highlight of the entire weekend, with ‘Sights’ and ‘Strong’ particularly poignant moments. 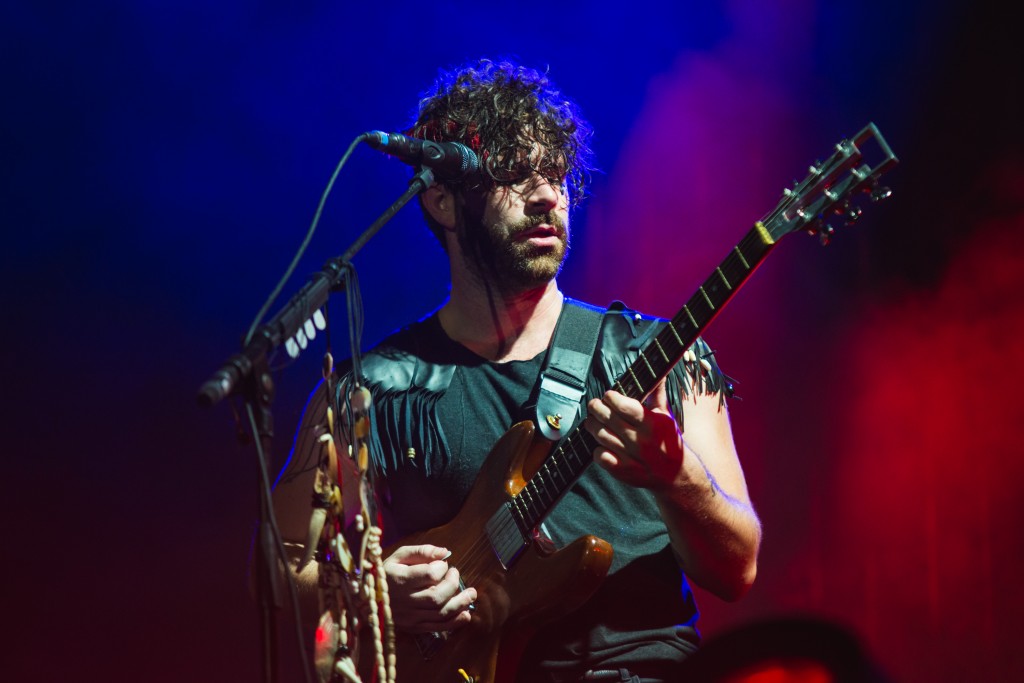 Foals’ story is almost a cult-like one. There’s no doubt that they’re worthy of their headline slot, with last album Holy Fire cementing their status as one of the UK’s most important acts, but their name remains a mystery to many who may own the greatest hits of their contemporaries. The set was, as expected, a rip roaring lesson in stage presence, with frontman Yannis Philippakis almost spending as much time in the crowd (with his guitar) as on the stage. From gloomy opener ‘Prelude’ through to bouncy ‘My Number’ and chaotic ‘Two Steps, Twice’, the band ended the Holy Fire tour in a fittingly, thunderous style. 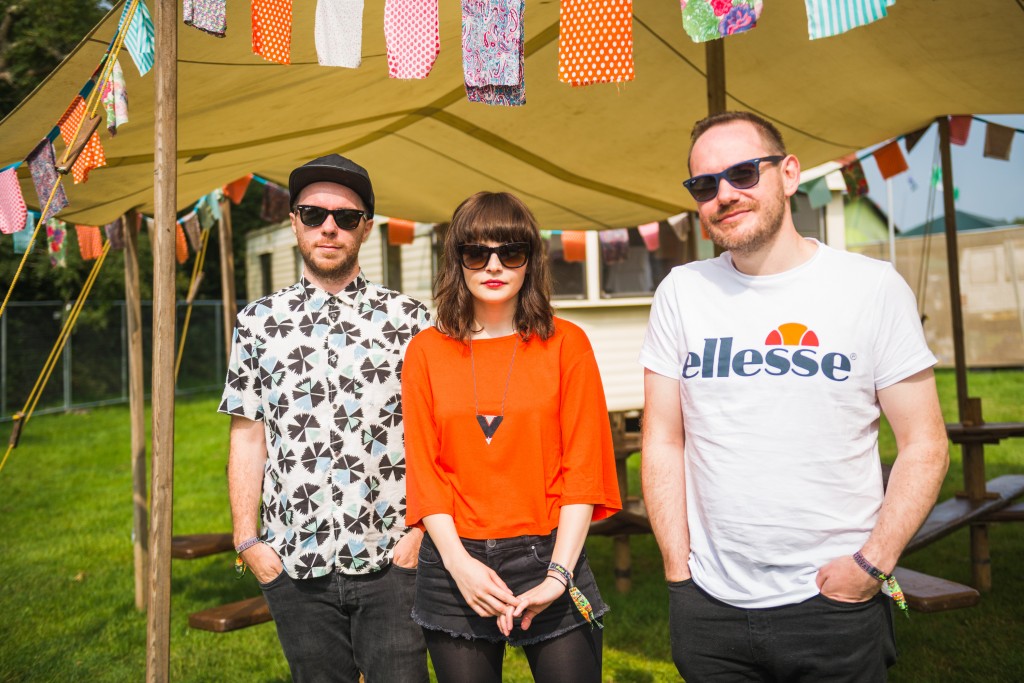 Electro-wizards CHVRCHES took to the Big Top for a short but sweet stab of heavy beats, playful electronics and sugary vocals, announcing that, like headliners Foals, this would be their last live date before heading into the studio to work on a follow up to debut, The Bones Of What You Believe. Singles ‘Gun’ and ‘The Mother We Share’ sounded strong, but it’s the album cut ‘Tether’ which is their finest live hour, starting slow before being bombarded with beats and sprinkled in star-like sounds. 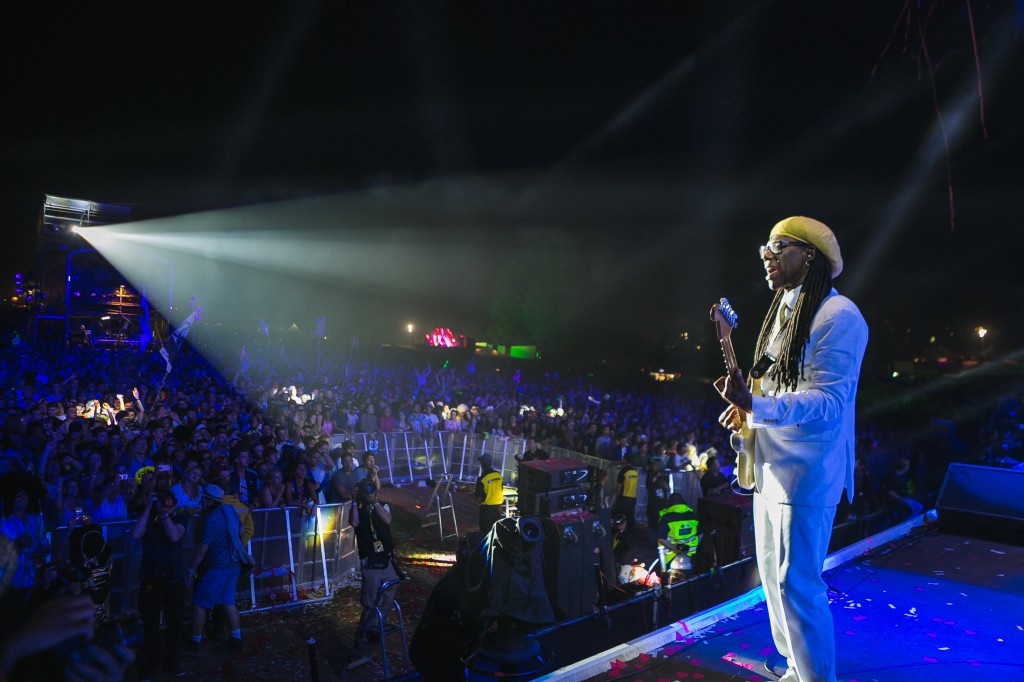 The Godfather of disco last played Bestival a whole year ago, but with a back catalogue featuring a who’s who of the musical world, it only seemed right that he closed this year’s Desert Island Disco. Following the lifting of the world record breaking mirror ball, Nile and his band played hit after hit, whether his own (‘I Want Your Love’, ‘La Freak’) or ones he’d written/produced for others (‘Let’s Dance’, ‘Get Lucky’), the songs of Bowie, Daft Punk, Madonna, Sister Sledge, Duran Duran, Diana Ross and many more became one giant tour de disco. Even more astoundingly, Rodgers revealed that the show was the hardest of his life, following the death of his friend and guitar technician Terry Brauer. Respect to a true professional, a musical pioneer and a Bestival legend.