Less than a year after headlining Bestival, Duran Duran return to a Rob Da Bank production, this time headlining the twin-site (for the first time, and only in its second year) Common People. With the majority of the crowd dispersing following a Katy B by-numbers slot, it seems as though the only ones sticking around to watch the foursome play are those middle-aged Duranies who were never willing to travel outside of Southampton to catch a glimpse of John Taylor’s chiselled features.

The DJ warming up the crowd and asking “Who loved the ’80s?” does nothing to dispel their yacht riding, hair spraying, Live Aiding antics, but the band are now on album #14, and clearly determined to start their show in the present. ‘Paper Gods’ – the title track to last year’s top 5 album – blends r’n’b beats with Pink Floyd-like breaks, holding the attention of a mainly early 20s crowd who appear from nowhere, but chant back to ‘Wild Boys’ and the “do do dos” of ‘Hungry Like The Wolf’ as a string of early hits follow.

‘Last Night In The City’ (DD blending disco-funk with EDM, and featuring Kiesza on Paper Gods) is surprisingly one of the bangers of the evening, the younger crowd appreciating the big beats where some of the band’s own audience might use it as a bar break, with the run of ‘Notorious’ and last year’s single ‘Pressure Off’ (both recorded with Nile Rodgers, the former from ’86) is equally appealing to all ages. Their cover of ‘White Lines (Don’t Do It)’ gives Grandmaster Flash’s anthem a raw, rock edge and goes down a treat, and when ‘I Don’t Want Your Love’ (a non-top 10 single from ’88, and only recently added to setlists) keeps them moving, it’s as if the band had always held their current festival favourite status. 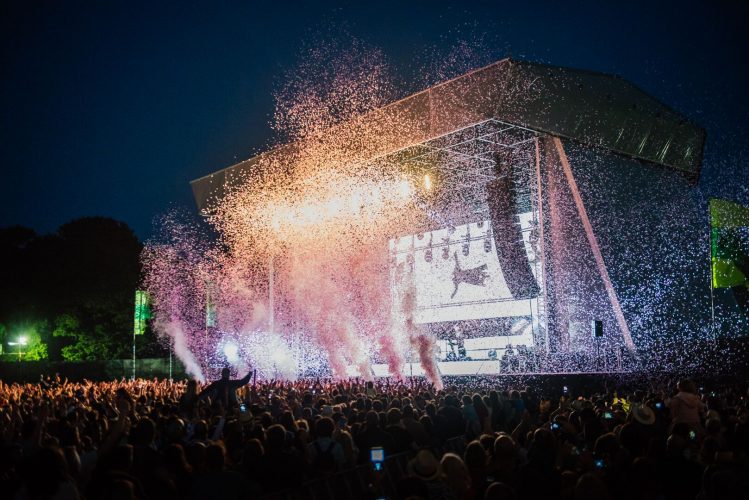 Ever a pillar in the band’s career, David Bowie is honoured as ‘Planet Earth’ segues (not exactly seamlessly, but working for the outro) into ‘Space Oddity’, while a mash-up of ‘(Reach Up For The) Sunrise’ and ‘New Moon On Monday’ is equally clunky and confusing when the two collide. Prince is later honoured during ‘Save A Prayer’, as tens of thousands of smart phone torches light up Southampton Common, Simon Le Bon whispering “when doves cry” as Nick Rhodes’ whirling synths slow to a halt.

Calls for ‘Rio’ are answered to close the show, and just like that a band written off more times than Tony Hadley’s had hot dinners once again win an audience over. They’re still pretty new to the festival scene, but with Coachella appearances and a Bestival headline slot already in the bag, surely the Eavis’s call can’t be too far away.