If you need any tips on how to completely steal everyone else’s thunder at a festival, look no further than Mac DeMarco. Bang on time, looking like an indie teenage girls dream in army print dungarees, DeMarco kicks off the set with ‘Salad Days’. Of course, it being Mac DeMarco and his band, things weren’t smooth sailing – Andy’s guitar broke after the whole song prompting a “It’s 2015, go listen to a fucking DJ bro”, and the band had no shortage of bizarre objects thrown on stage. A bad day for Andy, his guitar broke again during ‘Let Her Go’ luckily this is Mac’s band and, being who they are, the band persisted and Andy launched into a vocal solo before Piers began to cover ‘Blackbird’. With the fixing over, the band went on to play ‘Viceroy’ and ‘Annie’ before attempting to ‘break the world record’ for most people on shoulders. Arguably dangerous for a bunch of people influence by sun and no doubt mild heat stroke, it was quite a sight, and the perfect way to launch in to ‘Brother’. Their constant on stage banter – “What the fuck are we doing here” – seemed to split the audience: by the last song Mac had two bras on stage, whilst others lobbed shoes and oranges scarily close to the faces of the band. Letting the band take over completely, Mac clambered into the audience, leaving the band to do a lengthy instrumental as he crowd surfed almost to the back of the crowd; returning surprisingly unscathed and with a newly acquired had and cigarette they finished the song, and to the disappointment of the crowd, the set. 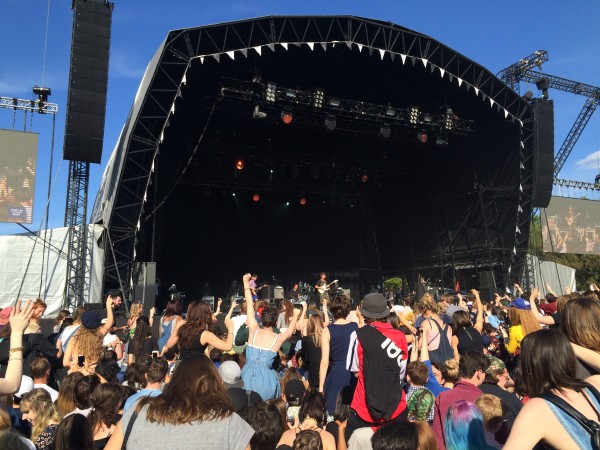 Tucked away from the sunshine and the mainstage, Baxter Dury played the small but densely packed out Moth Club. Pacing around the stage with a can of red stripe in one hand and a cigarette in the other (only when he’s not playing keys), with his mumbled cockney narratives you find yourself somewhat charmed by Dury; unusually so when he’s playing the likes of ‘Cocaine Man’. But it’s seemingly not just me he’s affected: after all Patti Smith is playing and he’s got a whole room of people who’s eyes aren’t drifting from him – unless that is, they’re looking for someone to dance with. It was also, strangely, the only time I’d witnessed an encore requested the whole weekend. It seems Baxter truly knows how to woo an audience with his cockney charm.

By the end of the night, aside from a few stragglers, it was difficult to imagine anyone anywhere other than the mainstage to see Ride. With ‘Nowhere’ named one of the greatest shoegaze albums, Ride were no doubt massive inspirations not just for the audience, but for a large number of bands on the lineup as well. Unbelievably tight, each song was played completely flawlessly; whilst it may have been a little too perfect, it’s admirable for a band who – aside from one reunion show in 2001 – have been ultimately split up for nearly 20 years. But Ride are back now, and confident about it too. Not holding back on the self-appreciation, Mark Gardener claimed “What a song, what a gig”. Clearly proud of their return, Ride were the perfect end to the night. Despite a few stragglers who’d clearly become disaffected with the music, opting instead to run around in circles, the diehard fans stayed at the front, unapologetically dedicated to the band in front of them. 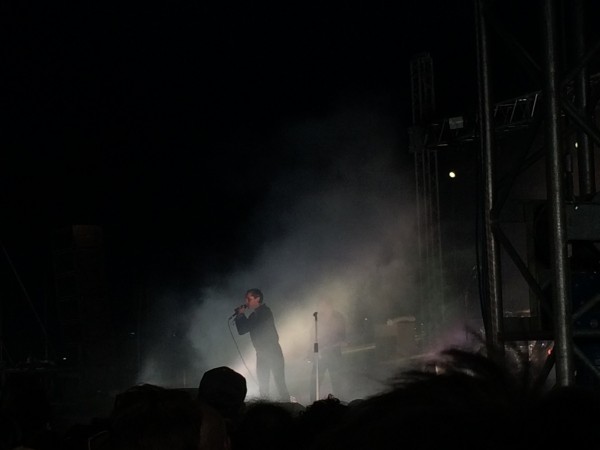 The day also saw Savages grace Victoria Park with their brilliant all-female post-punk revival, DIIV show off the new wave of shoegaze and the likes of Yak and Happyness represent London. Gaz Coombes charmed the audience and despite the disappointment of Hookworms cancelling, the day wasn’t short of fantastic bands.