Gigslutz touched down in the heart of Wrexham last weekend for four days of the best in local, regional and international touring talent. As newcomers to the festival we were quietly optimistic about what to expect. Both the bill and the excitement surrounding the North Wales shindig had impressed us greatly and as you’ll evidentially see, it went a long way in exceeding our expectations. Most notably, FOCUS seemed to really cultivate a sense of community that other multi-venue city festivals seem sometimes to lack. So here’s to FOCUS WALES, please enjoy a few of our highlights.

I Am Of The Universe

The congregation at St. Giles’ Church is treated to an especially sinister sacrificial offering from otherworldly doom-pop trio IAOTU on Thursday evening. Echoing the garbled electronics and long-drawn carnal vocals of both The XX and Portishead, they weave their way through a set that intelligently shifts between sadistic incantation to stained-glass-trembling trip-hop to moments of blissfully restrained ambience. 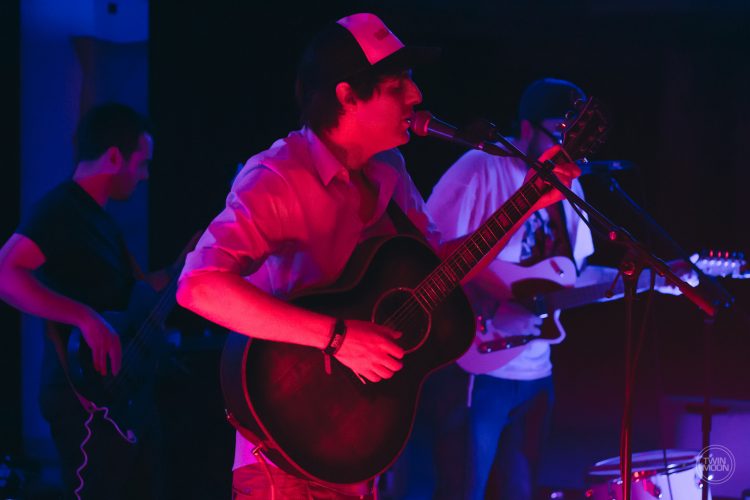 Alt-folk act Campfire Social stood out with their extra loud set (we’re not talking ‘The Doors at Hollywood Bowl loud’ but still pretty heavy) that blended Beach Boys harmonies with the songwriting chops and vocal stylings of Fionn Reagan. The joyous whooping of ‘The Ocean, The Sunshine, And Me’ and the pensive charm of ‘C.M. Playwrite’ burn brightly in the otherwise darkened, cavernous cubby hole of the Un De Gun’s ‘Void’ stage. 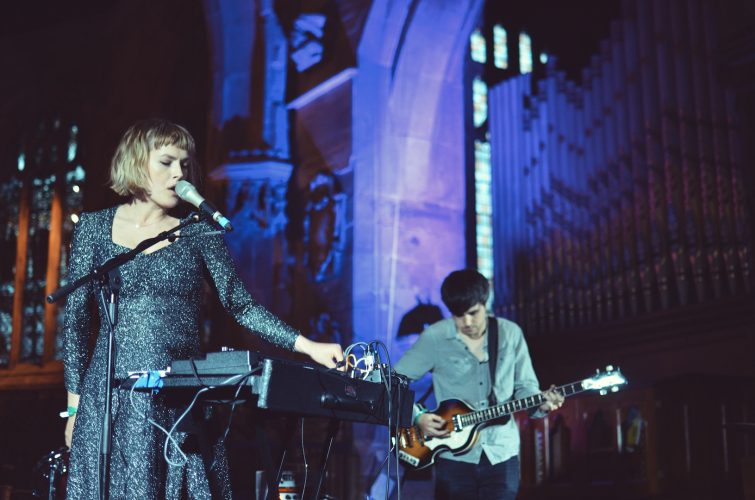 Bringing some much needed attitude and clamor to Central Station – aside from when God Damn told us to “shut the f*ck up” – dubbed the Adam’s Family band by one fan, Chupa Cabra are pure, pogoing garage-punk pandemonium. Double-edged lyrical tidbits like “Horses are being turned into glue”, “My girl’s going to lay her eggs in you” and “I’ve been sick since they cut the umbilical” are spat at the audience, much to their delight. Nothing’s serious. Nothing’s sacred. Hide your dogs and bikes because you’re going to be seeing a lot more of Chupa Cabra.

Possibly quite the contrast to its standard Friday nights, The Old No. 7 Bar is reduced to something of an awed hush as three outstandingly distinct songwriters take to the stage. Denuo’s music hangs heavy in the air, rolling over you like a morning mist, with wintry overtones that nod towards the delicate introspection of Justin Vernon. “You get so tired of waking up, finding every day is just a dream” sings Jon Coley as he unveils yet another strikingly personal song, which is made all the more poignant by his expressive vocal reach. Every soaring falsetto seems to takes the listener up amongst the clouds and then releases you, sending you plummeting back down into the cold hard dirt of reality. Alx Green, like Coley before him, also mirrors a few John Martyn traits, except his are more apparent in his smooth-to-gritty vocal range and intricate, percussive guitar work, especially on his final song, ‘Hollow’.

After gaining crowdfunding support to cover their airfare from the New Orleans (a big old pat on the back to everyone that chipped in) Charm Taylor took Central Station by storm with their animalistic dub, hypnotic funk and smooth soulful choruses. Ms. Charm Taylor’s hip-hop chants resound like a rallying cry, as the wired tribe of fans in front of her hang on every word, repeating them in a ritualistic, rhapsodic fashion. 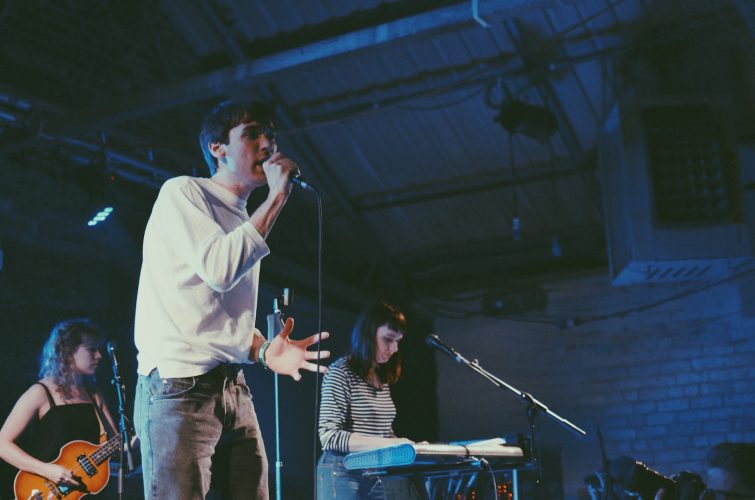 Meilyr Jones appears onstage like a young, erratic David Byrne with a shared talent for penning off-kilter art-pop. Carefully watching his watch, he splits his time between climbing speaker stacks, pirouetting through the crowd and singing ‘Hallmark Card’ quality, psychedelic lullabies. ‘All Is Equal In Love’ is a clear standout, with its loved-up Morrissey vibe, sweet string line and off-the-cuff Jarvis Cocker delivery. 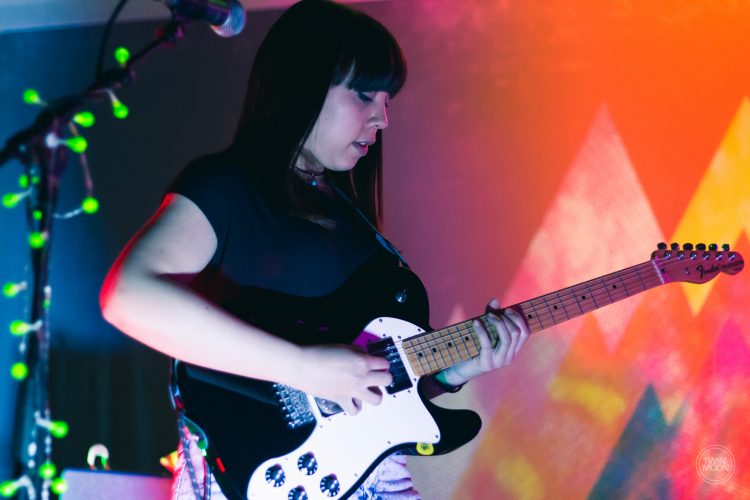 Peaness are something of a success story in North Wales. After the initial uproar had by some of the Chester Chronicles’ readership – “I DO SAY! PEANESS?!” – they’ve been widely championed by the BBC’s Adam Walton, Huw Stevens, DiS etc. and they’ve been smashing festival spots and support slots across the UK. To see them live you are instantly charmed by both their stage presence and hook-heavy sound. What can initially come across as sugarcoated, is in fact driven by highly perceptive lyricism that’s unafraid to point fingers at sadsack employers, corporations and politicians, as seen in ‘Ugly Veg’, ‘Fortune Favours The Bold’ and ‘Oh George’. As tonight’s Un De Gun gig goes to show: Peaness are seriously not to be underestimated. Anarchy is sounding tighter, more polished and god damn gratifying than ever.

All the way from Rhyl but looking as if they’ve taken a round “time-trip” via Haight-Asbury and Nashville, the Goat Roper Rodeo Band firmly claim their place as one of our favourite acts of the weekend with their cosmic country blues, close-knit CSN harmonies and quasi-southern charisma. Moving between the softer, Buffalo Springfield/Hiss Golden Messenger like country soul to the more upbeat, avant-garde country of Sturgill Simpson. This three-piece have come along way since we first encountered them busking years back and we’ve got a feeling they’ll be piling in the camper and hitting the road for many years to come.

STILL BEATING OURSELVES UP A BIT BECAUSE WE MISSED: Swnami / Heal The Last Stand / Falls / The Anchoress / Kagoule / Carl Foulkes Jones