Having had a break from festivals last year, what better way to re-introduce myself to the music, mud and glory than at Wales’ finest – and my personal favourite – Green Man. After being hugely impressed by its inclusive line up of upcoming and established artists, wide beer selection and all round lovely vibes back in 2015, I was very much looking forward to what 2017 had in store.

And I was not to be disappointed.

Kicking off the weekend’s music (after prepping myself with the nicest veggie bacon bap I’ve ever tasted – thanks Tea & Toast!) is Manchester’s W.H.Lung at the Far Out stage. With shades of the likes of Toy or Wild Beasts, their trippy, psych-filled haze and insanely groovy dance moves make for the perfect start to the perfect weekend.

Following the chilled out, sunny vibes of Chelou at The Walled Garden, it’s time for a bit of a change in tone; the intense, brash social commentary of South London’s Hotel Lux on the Rising stage. Delivering their completely engaging, eerily powerful punk-infused offerings, their angst-driven set resonates deeply, and proves to be a definite highlight of the weekend. 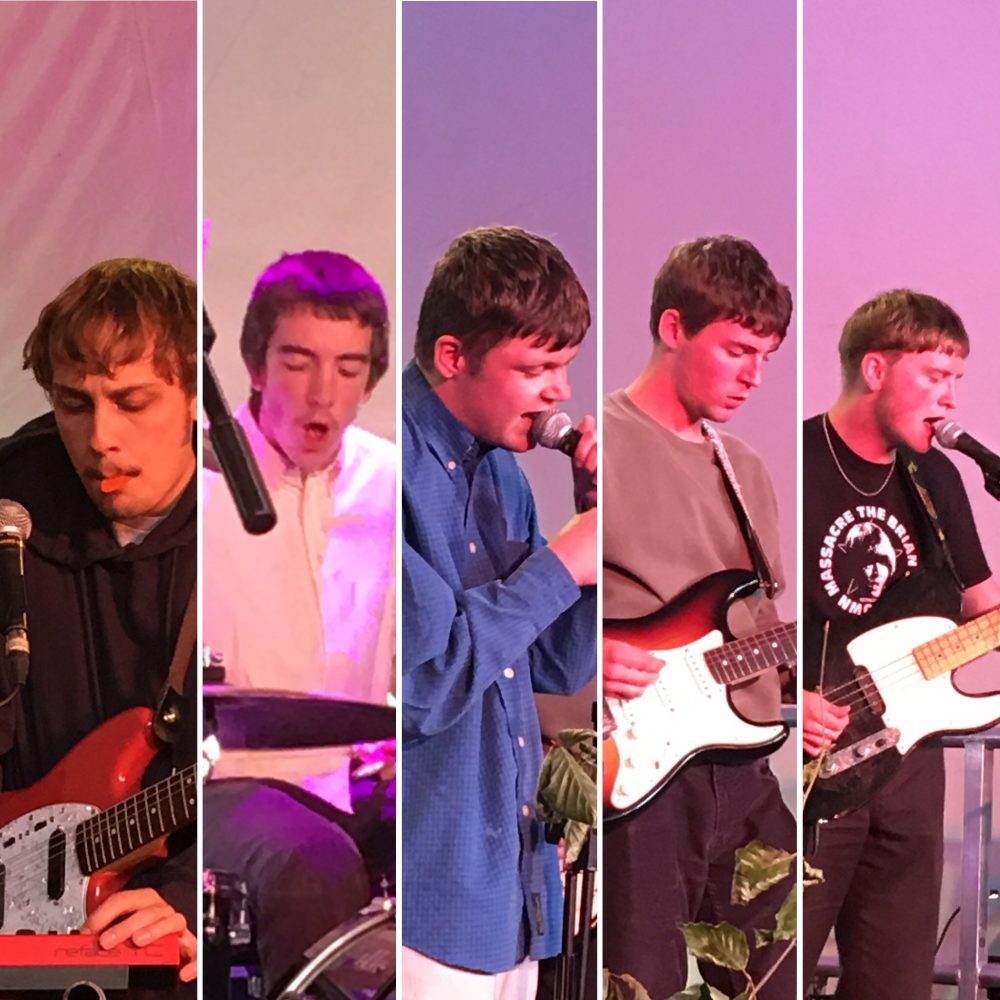 After sampling some more of the super tasty local beer on offer (the Club Tropicana a strong favourite), it’s back to the Far Out tent for the energy-filled, contagious joy of The Big Moon. Making it impossible not to smile, sway and whoop throughout, these four young women show us all why they’re deserving of the prestigious Mercury Music Prize they’ve recently been nominated for. 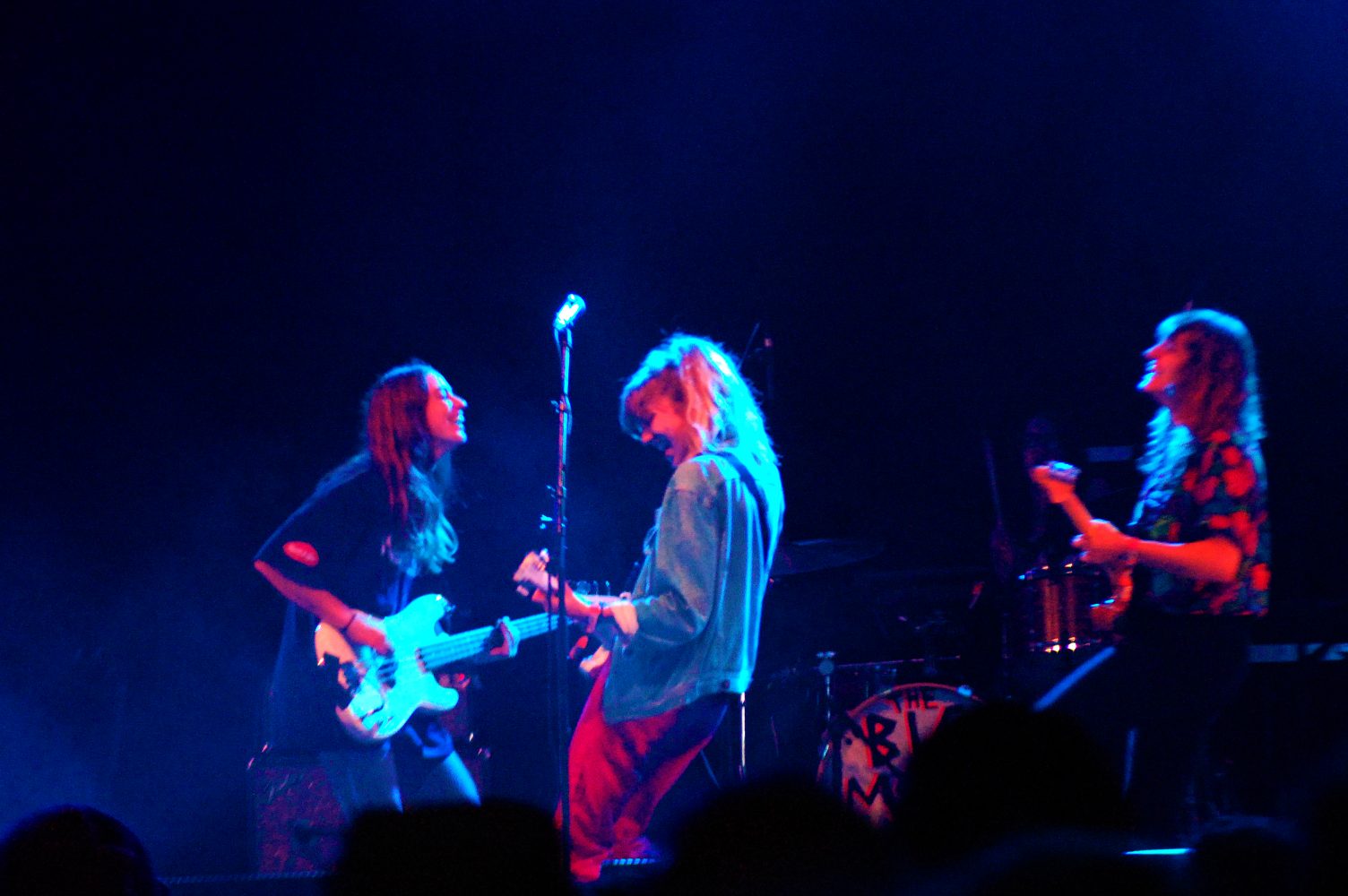 The uplifting, joy-filled experience continues with the truly infectious charisma of Spanish band Hinds. Oozing their fantastically catchy lo-fi garage rock with their sunny charm and humour, they truly bring a new meaning to the word fun. Seeing them live is just wonderful, their buoyant set leaving me grinning from cheek to cheek, and ready for what the weekend has in store. 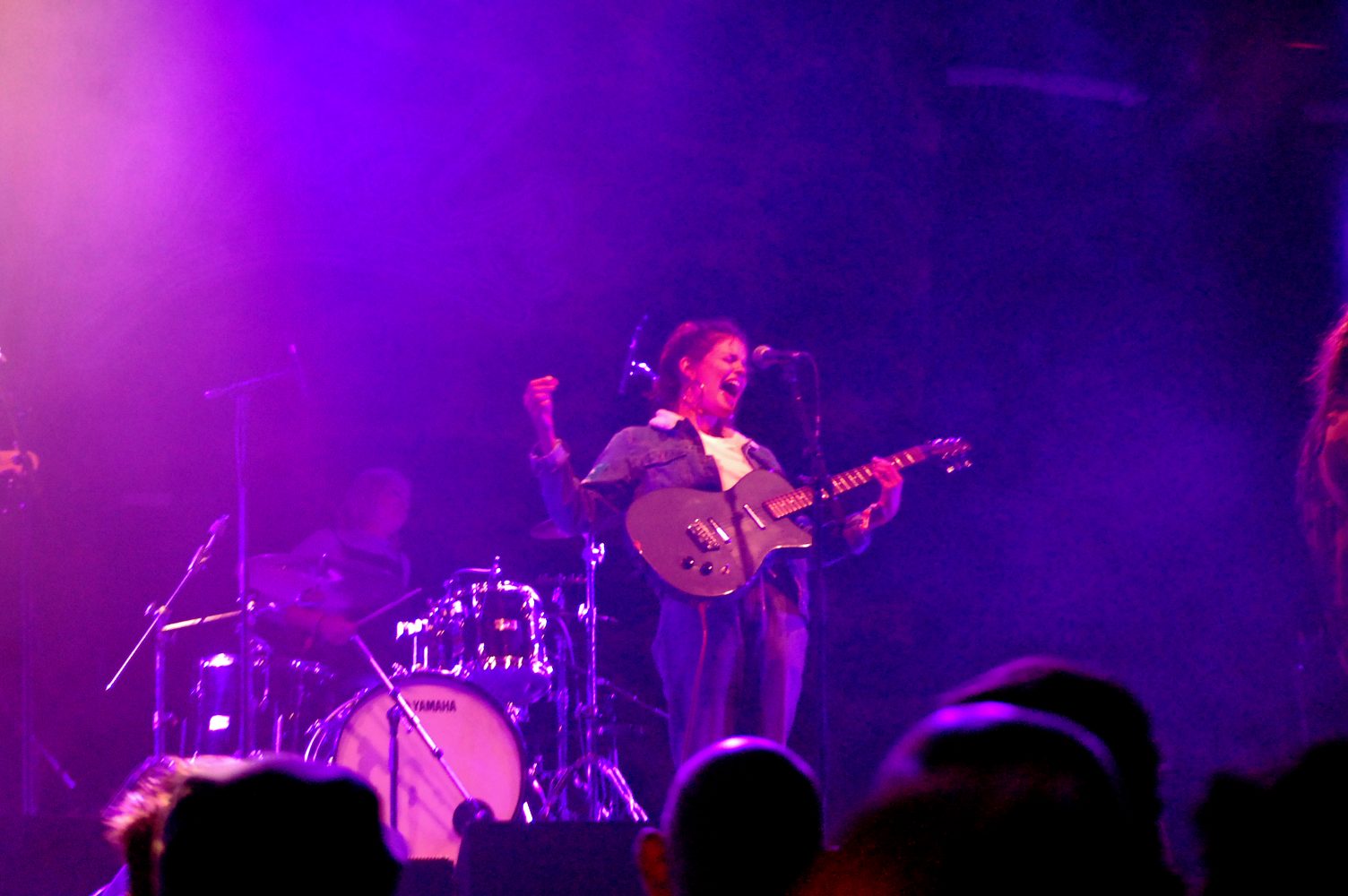 Closing the first night of the festival is the artist I’ve been most anticipating seeing; the utterly incredible Kate Tempest. Treating us to the whole of her latest Mercury Award-nominated album Let Them Eat Chaos, from start to finish, the minute she takes to the stage, she has the whole crowd simply captivated. Telling the story of seven different people in seven different flats within a London tower block at 4.18am on one given morning, each track oozes an immense poetic poignancy and dark, overwhelming resonance. 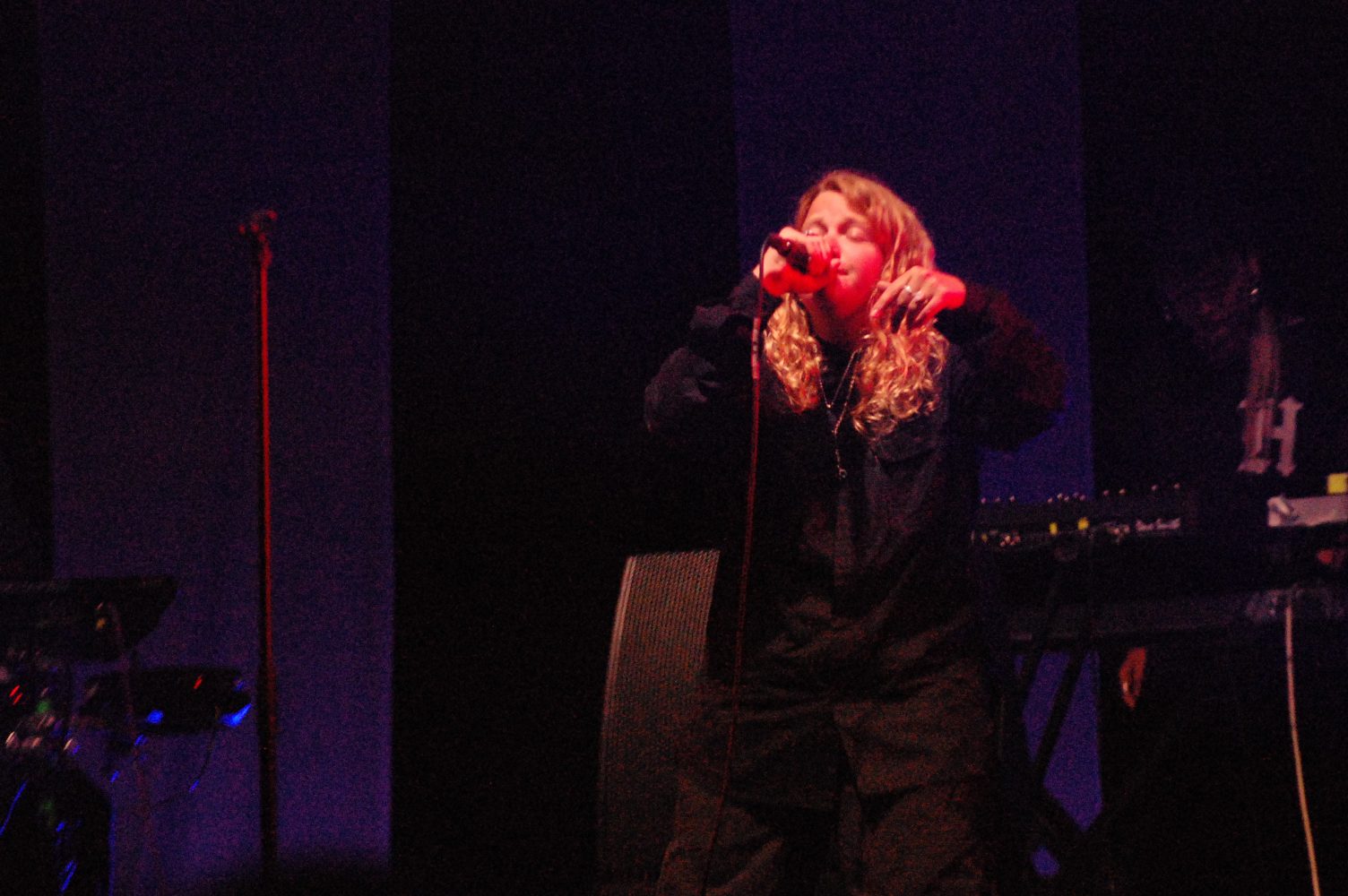 To be honest, I’m welling up just thinking back to it… I don’t really feel qualified to write about the truly powerful poignancy of Tempest’s set. With a backdrop of driving beats and simple, whirring hooks, her immense insight into society’s downfalls is told with mesmerising clarity and gut-wrenching force. As each and every one of us stands, completely hypnotised by Tempest’s emotion-strewn insight and the entrenched rhythmic throb of the beats, it’s clear that this is more than a musical performance or spoken word recital, it’s an overwhelming experience; an education. A necessary outpouring of brutally honest observations that Tempest expresses with majestic poetic clarity and an understated, subtle power that grabs your attention and doesn’t let go. An hour and fifteen minutes later as the set draws to a close, and you could hear a pin drop within this jam-packed tent; we’re all left completely speechless as we wipe away the tears and gradually re-engage with our surroundings. 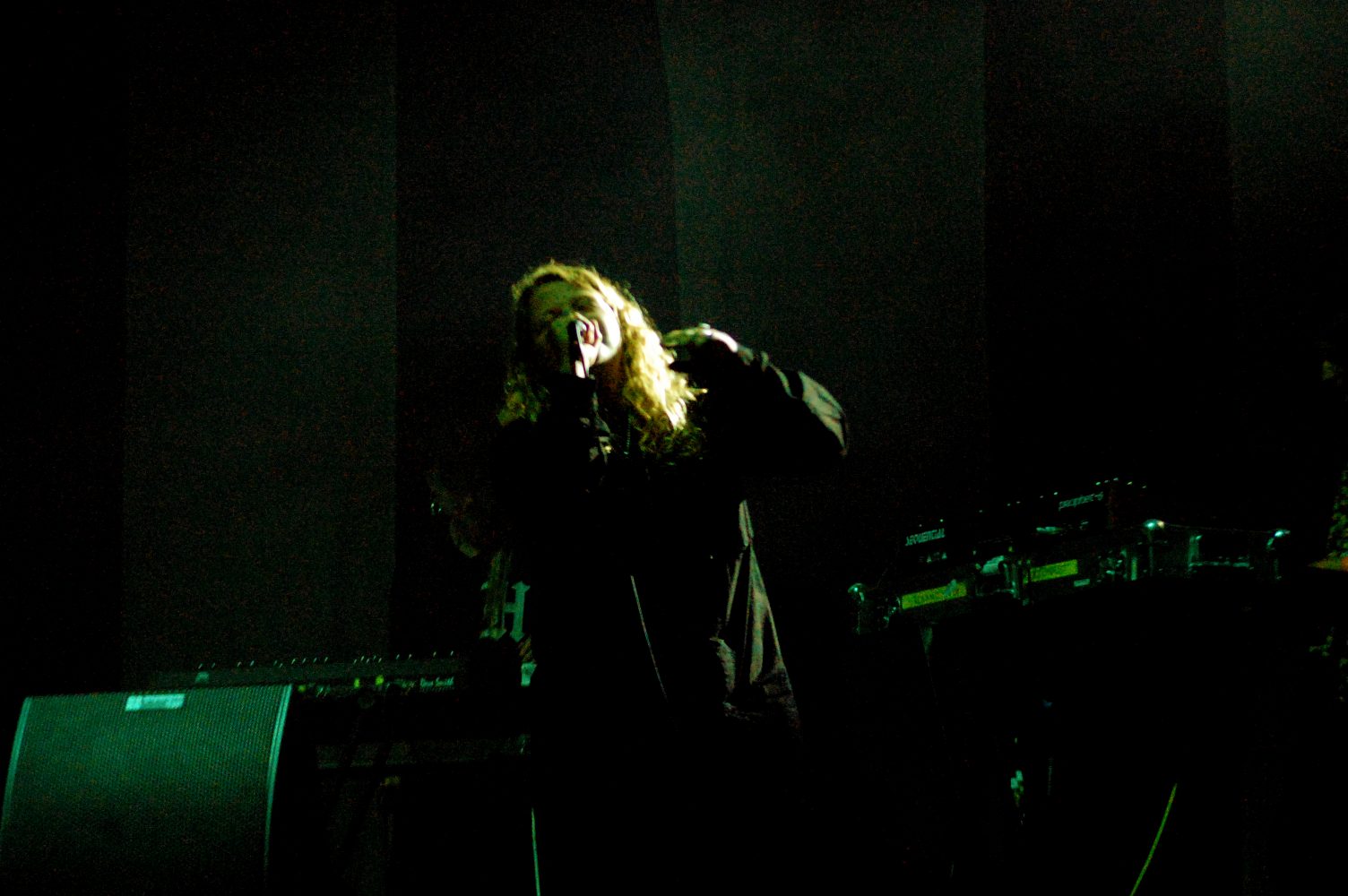 Getting Saturday started right is probably my most mentioned band of recent times, The Orielles. Drawing in a huge crowd to the Walled Garden, they wake us all up with their wonderfully woozy psychedelic haze and jangly joy. My favourite young trio exude their trippy, scuzz-filled sonic delights as I watch like a proud parent. Perhaps the sixth time I’ve seen them live, it’s clear that they just keep getting better – they’re more confident than ever before, and rightly so. They’ve established a distinctive, engaging and entertaining stage presence; as guitarist Henry bounces across the stage, he complements the immense sense of cool oozing from sisters Sid and Esme perfectly, as they continue to create their own utterly unique fusion of sounds, and cement themselves as my number one band of the minute (hour/year/decade…). 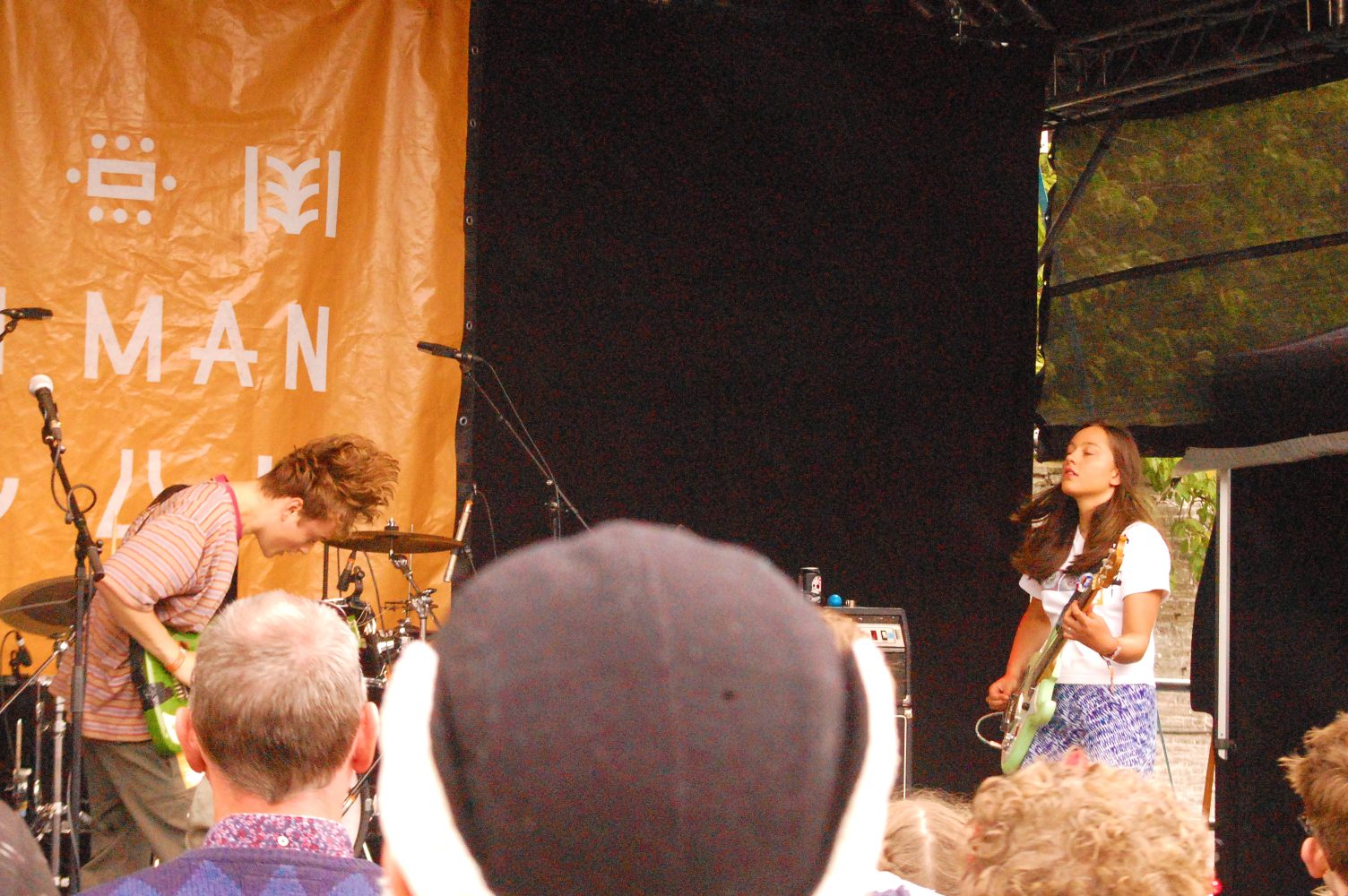 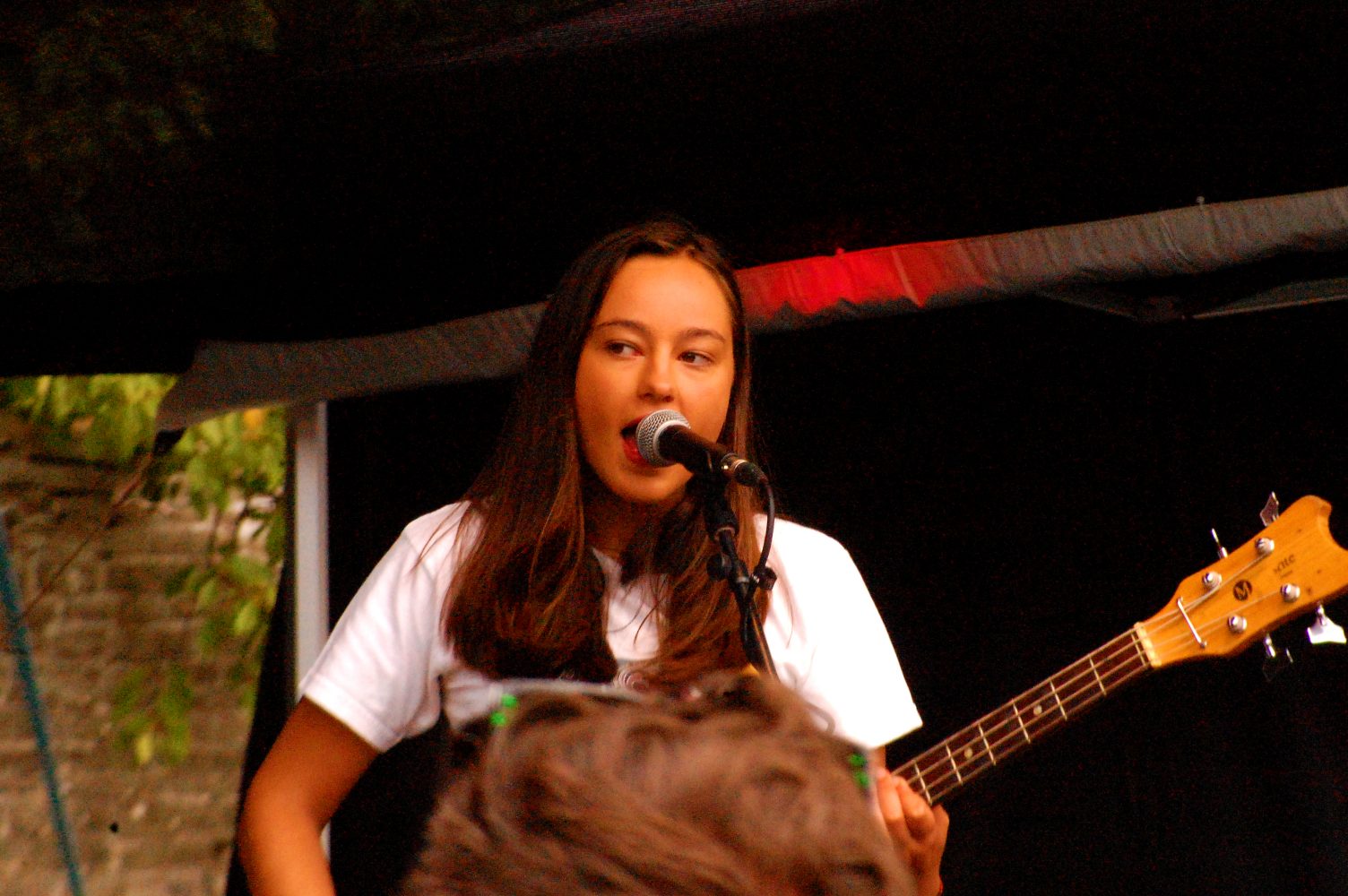 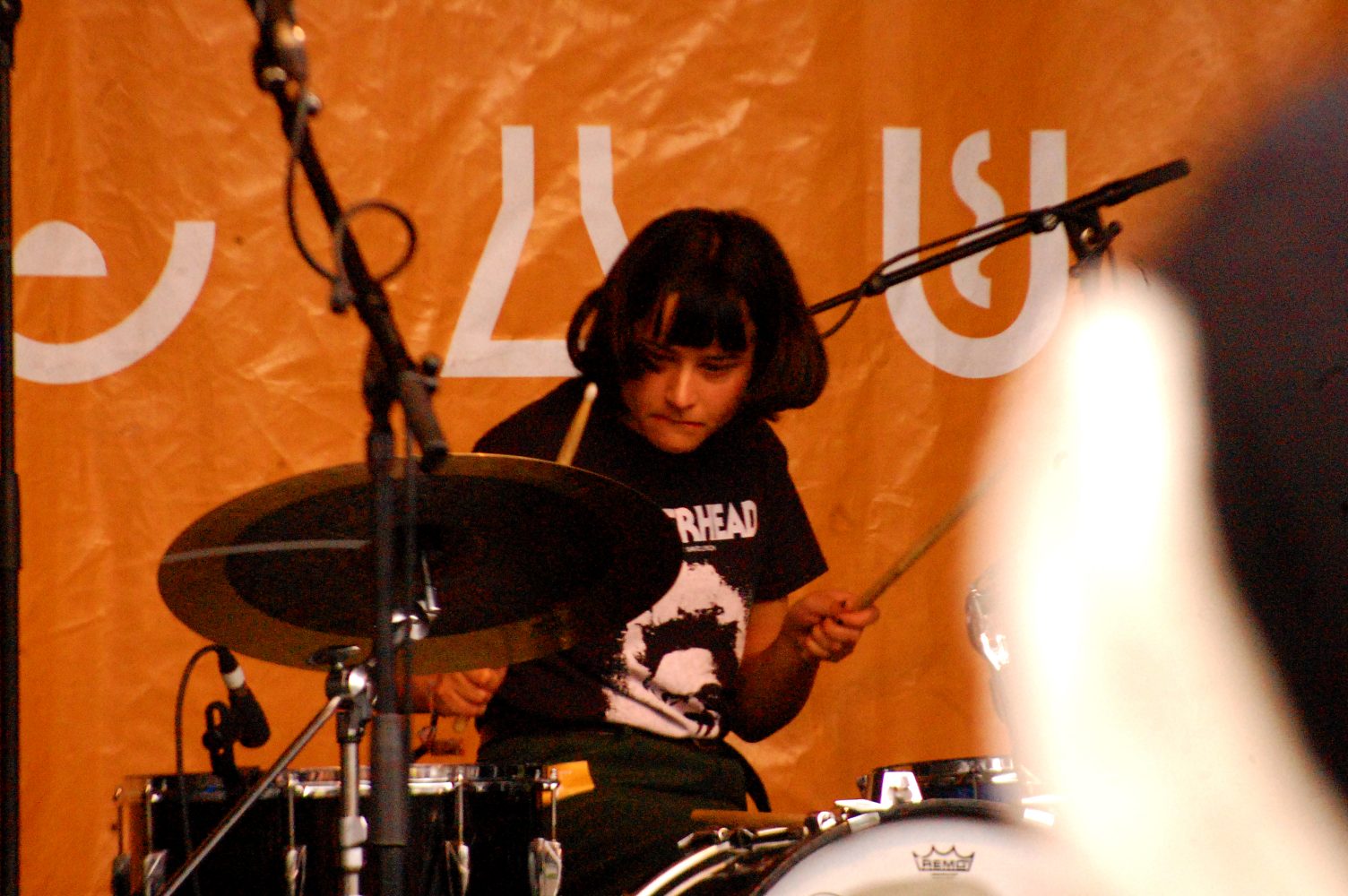 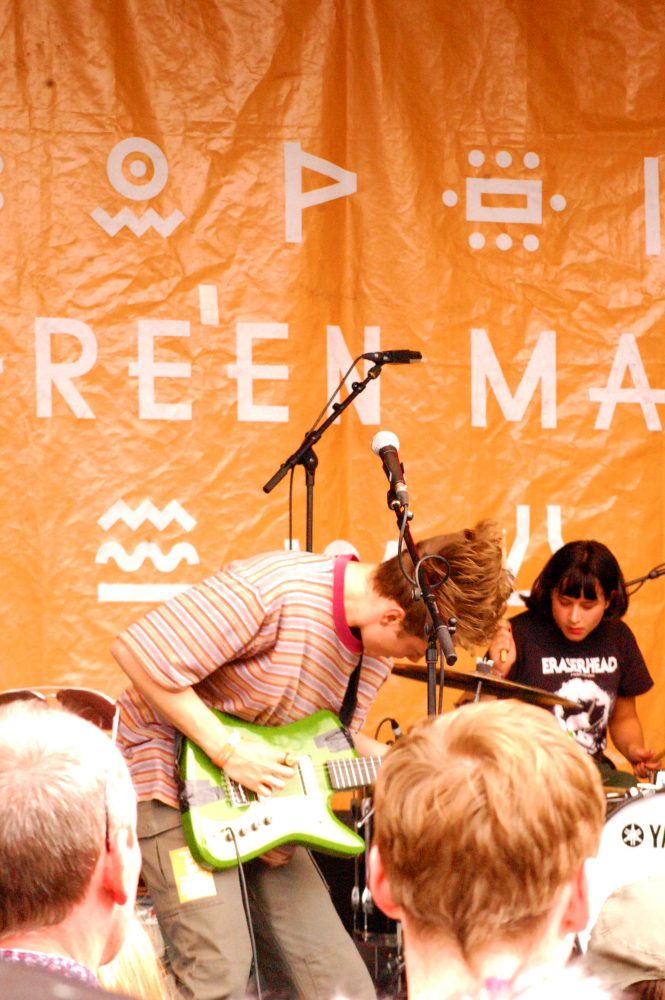 The afternoon continues in a dreamy, sun-filled haze of wonderful women. After enjoying all the blissful, electro-folk offerings of Emily Magpie, Aldous Harding completely blows us away with her utterly mesmerising, emotion strewn set as the sun shines down on us. More sunny delights come in the form of This Is The Kit’s cheery folk-inspired melodies and smooth, delicate vocals as her subtle emotive power oozes from the Mountain Stage to a captivated crowd. And to top off this run of dreamy female musicians, we return to the Walled Garden for all the twinkling, heartbreakingly beautiful musings of Brooklyn’s Big Thief. 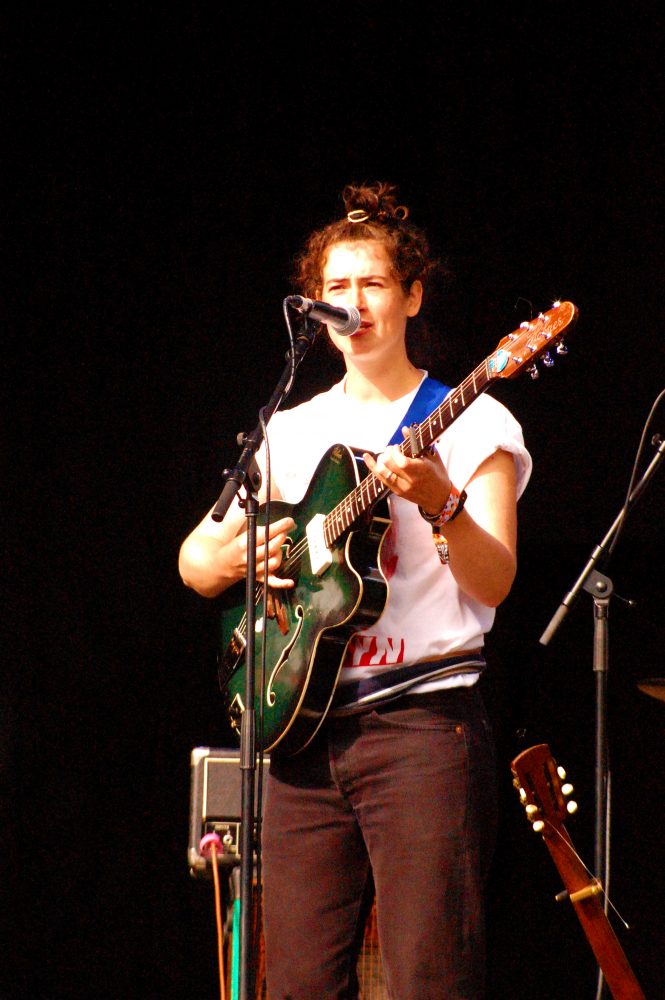 One of the best things about Green Man festival is the number of upcoming bands and artists it promotes, and there’s no better place to find these than on the Rising stage. Tonight it’s the turn of H. Grimace to wow the crowd. Having been featured as Ones To Watch on Gigslutz, their live set proves why they’re one of the most exciting bands around. With their gritty post-punk sound and insightful social commentary, their raw power blasts from the stage with a subtle, seething energy. 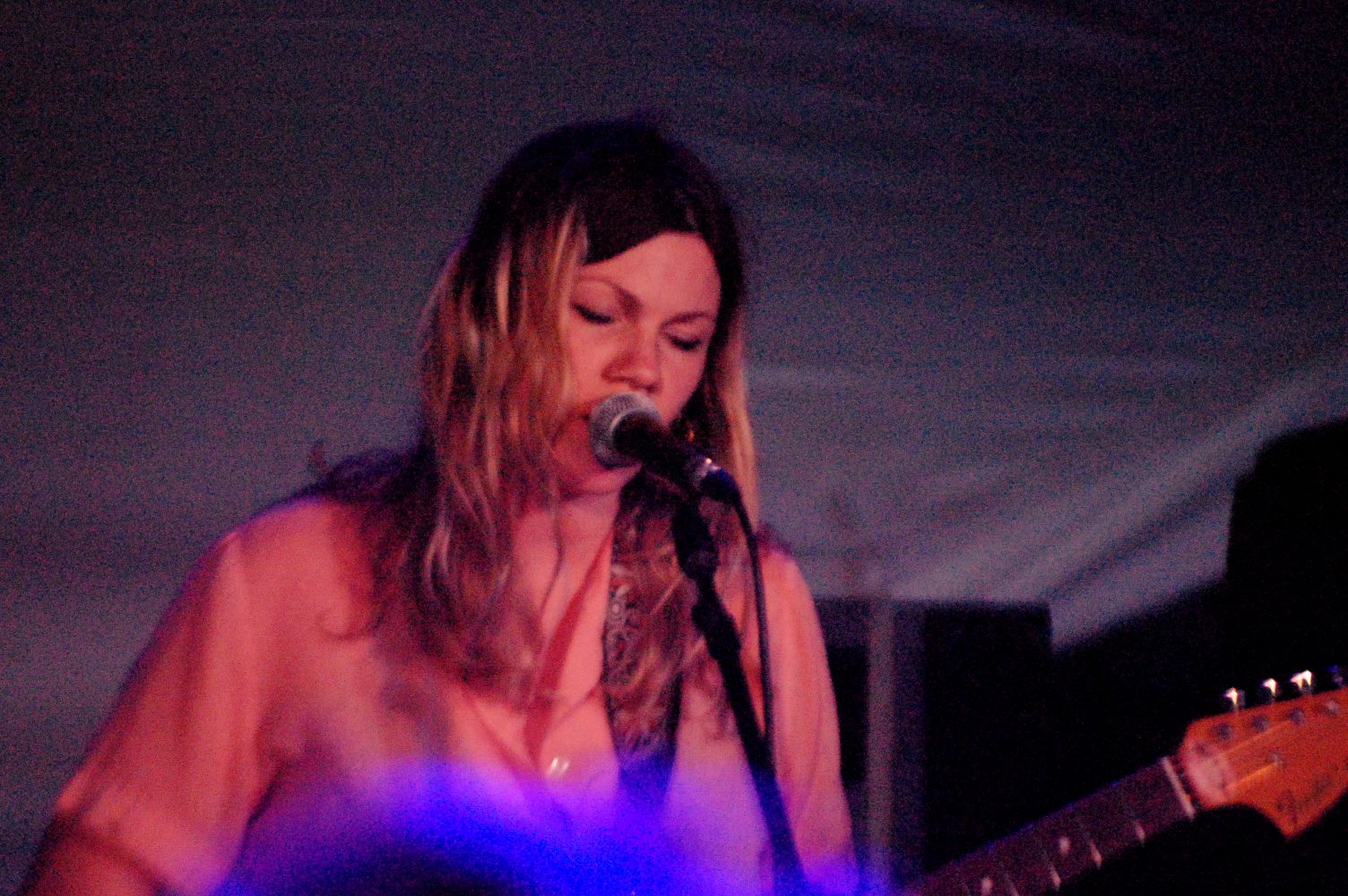 After hearing Marc Riley singing Thee Oh Sees praises on a regular basis, giving them the title of ‘best live band in the world’, I felt it only right to see what all the fuss is about as they headline the Far Out tent on Saturday night. And it turns out, as usual, that Marc Riley is pretty spot on. Driven by the immense, thrashing power of two drummers, riotous riffs rage alongside frenzied vocals with a ferocious driving energy; quite unlike anything I’ve witnessed before.

Having played on the Rising stage for the last four years, it’s about time Deep Throat Choir get a turn on the Mountain Stage. And so it’s pretty great to see the all-female collective there on Sunday morning. Since I last saw them two years ago, it seems the group has grown in both size and power. Dressed in matching vibrant oranges and pinks, they succeed in brightening a rather grey last day of the festival, treating us to a mix of covers and originals from their recent debut album. With everyone singing along to personal favourite ‘Baby’ being a pretty emotional highlight, it’s a simply euphoric experience watching these wonderful women create such perfect, intense harmonies and sweeping vocal melodies. Epitomising the exceptional power of women coming together to create, their voices unite to summon a force that is truly awe-inspiring. What a way to start a Sunday. 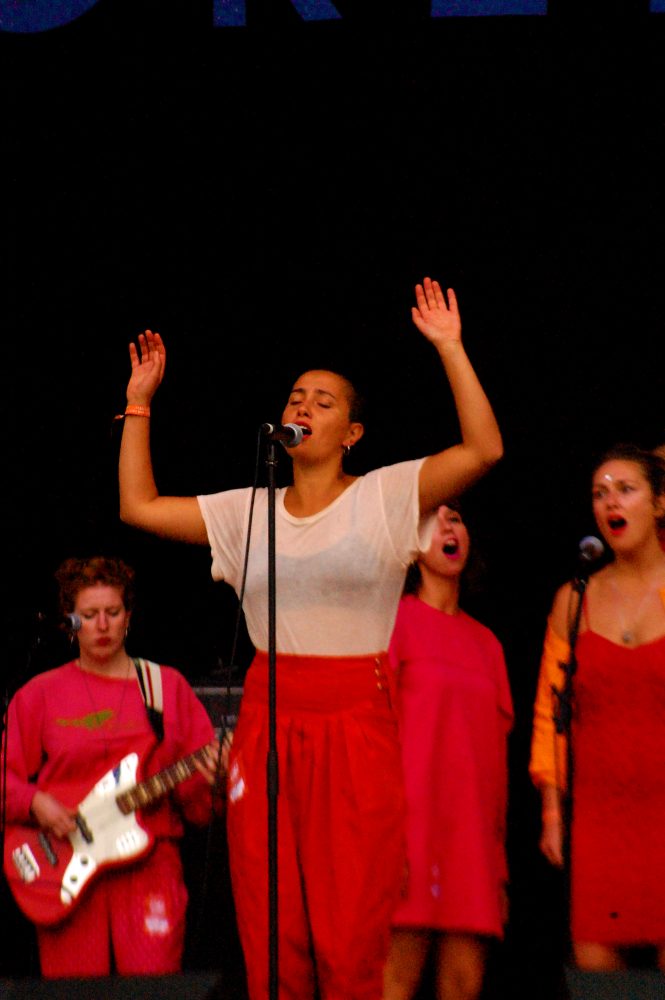 A pretty huge change in mood sees South London’s Shame bring their raging, angst-driven power to the Far Out tent. This is a band who don’t hold back in their performance, as front man Charlie Steen swaggers across the stage – and at times into the crowd –  he instantly commands your full attention with his intense charisma and aggro-fuelled energy. As the band blast out each brutal, fiery offering, they race, scissor-kick and fling themselves into each other, making for one of the most memorable sets of the weekend. 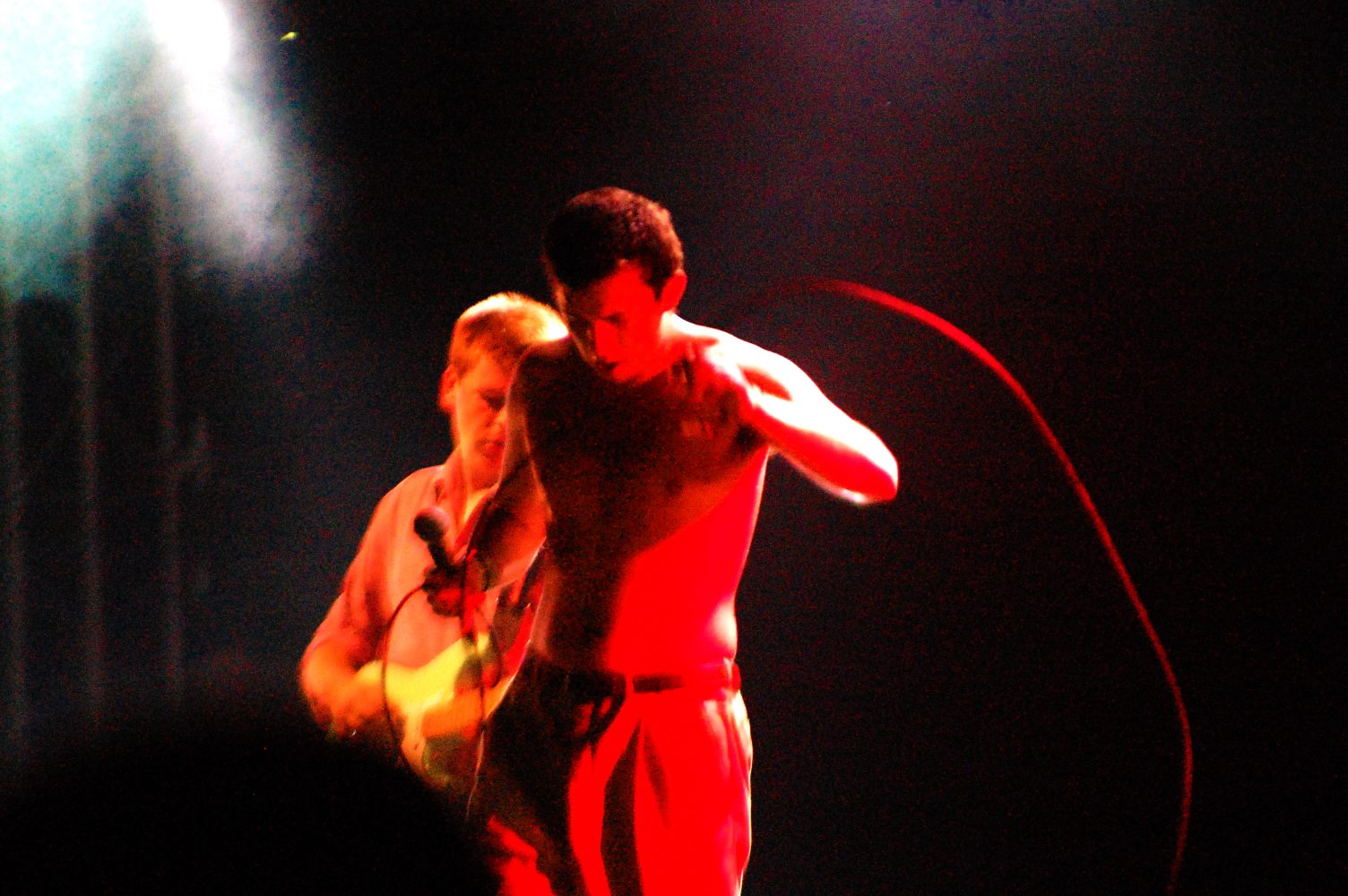 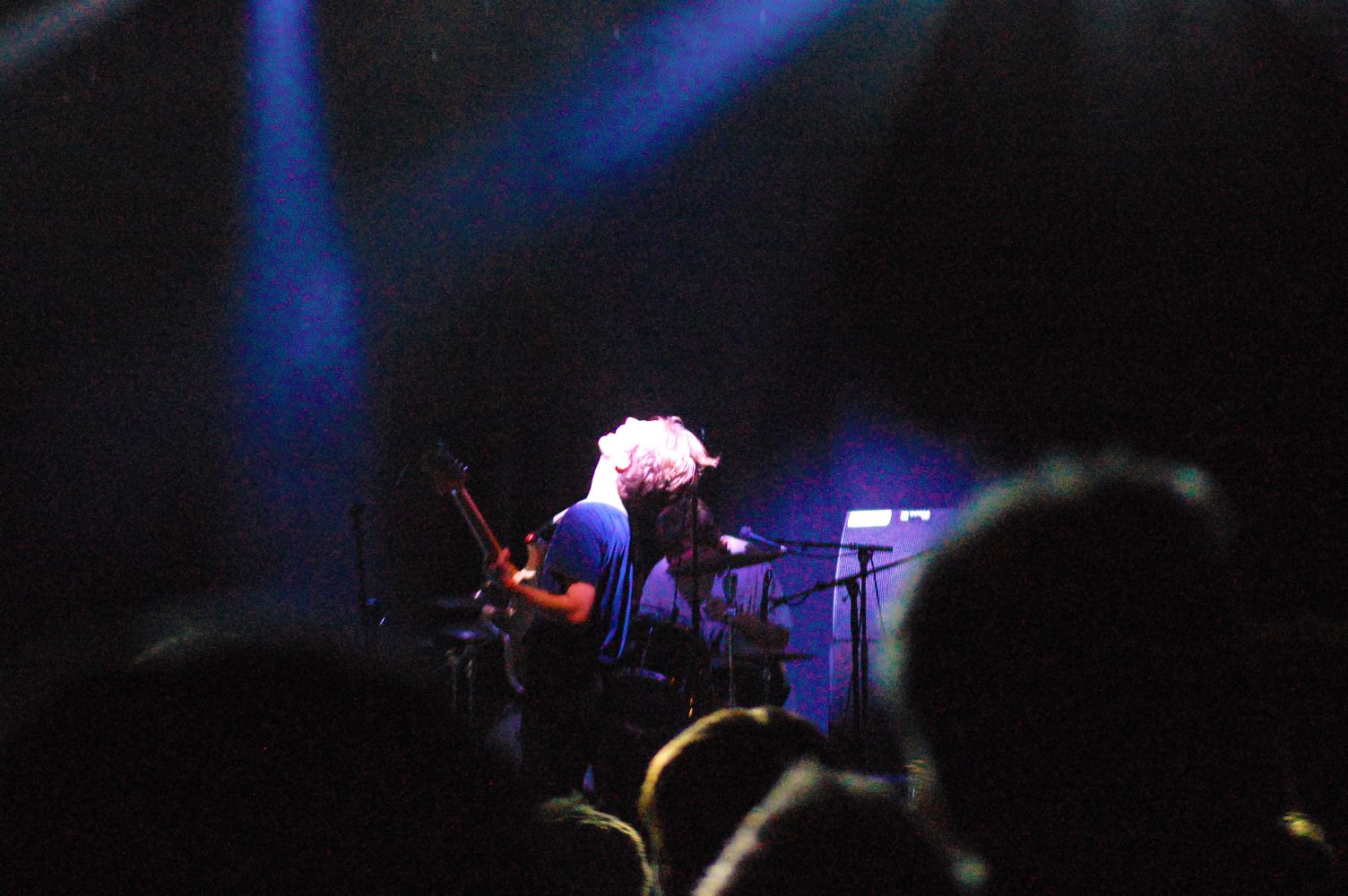 Throughout the afternoon, I fall in love with Sunflower Bean’s mega cool brand of racing rock ‘n’ roll, relive my teenage years whilst getting soaked watching Conor Oberst’s spine-tingling set, and float away in a wispy cloud of joy as Girl Ray’s shimmering, sunny delights overcome the rain and brighten the mood in an instant. 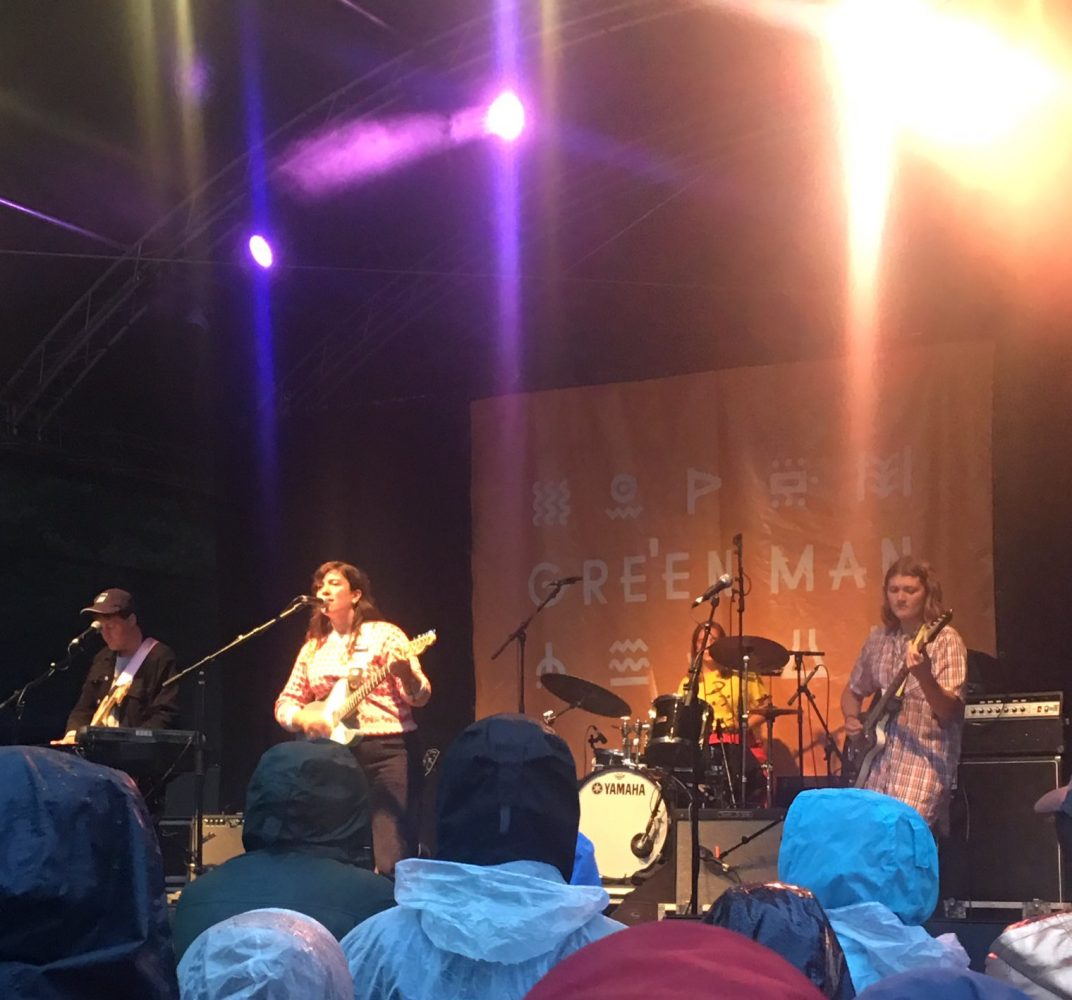 And finally, drawing the festival to a close is the legendary PJ Harvey. Radiating her unique, haunting grace, Polly Jean glides across the stage like a majestic crow, delivering her sweeping, eerie tales of the world. And (despite the set mostly comprising of more recent material) she even manages to fit in personal favourite ’50ft Queenie’ with all the pummelling ferocity I first fell in love with, as she ends the festival in a poignant wave of spellbinding grandeur.

A wonderful weekend in a magical setting. With its perfectly sized site, friendly, chilled out atmosphere, idyllic location, range of craft beers and – of course – the immense selection of fantastic music, particularly from newer bands and artists, I’ll definitely be heading to the Beacons again next year.

This Feeling Track of the Day : Farebrother ‘Rewind’