Nostalgia is the name of the game for Thursday night with performances from a Jam tribute band coupled alongside Madchester stalwarts The Inspiral Carpets. However, it doesn’t get more sentimental than Boy George. The ’80s icon looks in better shape than ever. Pulling in the big crowds and wearing more glitter than half the festival goers, his easy-swaying version of ‘Karma Chameleon’ has every single reveller within a wide enough diameter singing at the top of their lungs. 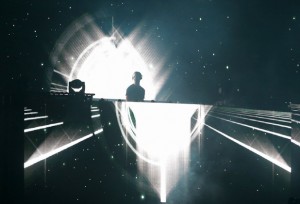 The following day plays host to some of dance’s biggest current names including energising sets from Rudimental and Katy B. However, it’s the joint headliners that cause the most bisection of opinion. Biffy Clyro are placed below Calvin Harris on the headline scale which seems pretty ridiculous. It’s without doubt that Biffy are a hard working band whose live sets are always acclaimed whether you like the music or not, however, because Calvin Harris has more mass appeal and is easier to dance to on a Friday night, he has been placed on the higher pedestal. Which wouldn’t be a problem, if Calvin Harris actually did anything at all. He played all his latest current hits, including the world dominating collaborations with Rhianna, Florence etc. but stood behind his desk, literally just pressing a few buttons. That’s all it looked like anyway. None of his old hits, like ‘Not Alone’ or ‘Ready For The Weekend’, were featured, which questions whether Calvin has just completely disregarded any of these or whether he relied on banger after banger to create an undisputedly great atmosphere.

“Oh look it’s that girl from Gossip Girl!” “Oh look it’s the girl who was in the Grinch!” That’s what generally happens when people see Taylor Momsen dressed up like a gothic prostitute, screaming down a microphone about people making her want to die, all followed by a stunned facial expression. Which is exactly what Taylor Momsen wants. She loves the shock appeal that goes hand-in-hand with her driving, hard rock that takes signals from Hole and The Runaways. Momsen has a huge amount of fangirls, who probably don’t even like the music, but because she’s pretty and blonde and thin and was Jenny in a TV programme where the demographic circles teenage girls, it’s the intrigue that comes first. However, Taylor’s role as frontwoman seems a little contrived. There’s no doubt that she loves music but her constant, “high as a kite” persona, doubled with slutty dancing and minimal frontwoman approach, doesn’t really go hand-in-hand. But her vocals are stronger than ever, especially when they’re let loose on her new material. 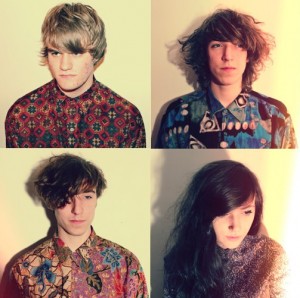 Some might say that the best bit about a festival is the discovery of a new band. When Isle of Wight wasn’t showcasing the bigger bands or having security nearly overthrow Hipshaker due to a rowdy Oasis tribute-act crowd, they had their fair pick of some exciting new talent. Hey Joe was the tent dedicated specifically to rock; it had DJ sets from Clint Boon, Tim Burgess and Leeroy Thornhill to name just a few. When I happened to be meandering my way back to the campsite past this port of alternative call, I discovered a band called Hot Vestry. In fact, the first thing I noticed was lead singer Harry Ward’s shoegaze-style haircut, and I’m a sucker for a bowl cut. He has that snooty kind of Indie snarl down to a T. It’s pretty dark stuff and makes up for flaccid stage presence with sinister riffs and head-turning songs, that play with Peter Hook-style bass, which explains their New Order support slot. They’re an odd consortium of people but it’s pretty entrancing and had me more captivated than most other indie bands I’ve laid my eyes on this year.

The Specials – these guys showed that not all nostalgia has to be now considered a little dated, because they’ll always be cool. Their combination of highly danceable ska and rocksteady beat mingled with the zeal and attitude of punk bore a pretty huge crowd. How can anyone keep still when songs like ‘Ghost Town’, ‘Too Much Too Young’, ‘Rat Race’ and ‘Gangsters’ pierce the slowly darkening air? As the England vs Italy game takes hold, Lynval Golding asks the crowd to boo Suarez, to which the crowd kindly subject. The Specials keep a certain reverence in fans and fellow musicians alike and it’s this appeal that makes Red Hot Chilli Pepper’s Flea pay homage to them, telling everyone how honoured he is to play the same stage as the people who inspired him. And that’s pretty special coming from Flea, who is without doubt the most astounding bassist to ever walk planet Earth.

The excitement for Red Hot Chilli Peppers is palpable. They’re a band that have definitely earned their right to headline Isle Of Wight and the excitement for them has been generating since Thursday. How could they ever fail? How could anyone fail with Flea? The guy is a natural, born performer whose skills with a bass are literally jaw dropping. The songs hold titan credentials as it is with hit after hit being wrung through the field including ‘Dani California’, ‘Give It Away’, ‘Scar Tissue’, ‘Californication’ and ‘Can’t Stop’. However… no, ‘Under The Bridge’. It’s not like RHCP couldn’t fit it in; Flea fills enough gaps with handstand trickeries and jokes of being betrothed to Will Ferrell’s doppelganger Chad Smith. Then there’s the 15 minute lateness that could have been filled. Or the blistering battle offs between Flea and Josh Klinghoffer, which cemented Flea as certified mind blowing. There has to be some explanation but it left a lot of fans pretty pissed off, which is understandable despite how good the set was. To top it off, Anthony Kiedis, whose crowd engagement wasn’t exactly on par despite his bounding around the stage, left without a word of thanks or acknowledgement? Manners cost nothing, guys.

Deap Vally are the first of the cool, NME approved bands to take to the Big Top roll call of guitar certified bands. The pair look magnificent, in a kind of matching jacquard ensemble adorned with sequins, but the real perk here is their inviting primal sound. Lindsey Troy howls down the mic with a gusto and a smirk; she knows their good, she knows they have the whole audience in the palm of their hand and drummer Julie Edwards never surfaces from her kit as she bashes whole-heartedly through tracks including ‘Baby I Call Hell’, ‘End Of The World’ and ‘Lies’. “Stay in this tent today, this is where all the good shit’s at”, states Lindsey as she departs the stage, and she’s certainly not lying. 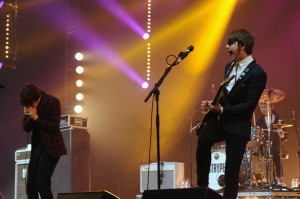 There’s still a lot of intrigue around Irish quartet, The Strypes. Three out of four are under 18 and there’s still a division of people who either find them derivative and over-privileged or astoundingly excellent and here to finally turn rock and roll around. The best part about seeing these guys live is not the boundless energy and showmanship flaunted from start to finish, not the overwhelming guitar solos, not the engaging charisma but the turnaround of people’s perception after seeing them. It’s almost like a revelation. The boys have become slicker and sharper since last year; every single member completely immersing themselves in their instrument but still managing to make it look effortless. The tunes never stop or falter as The Strypes blister through a hefty amount of Snapshot, their latest EP Four Track Mind and even manage to slot a cover of Howlin’ Wolf’s ‘Smokestack Lightning’ in. This is quick-paced rhythm and blues, made purely for your entertainment.

A tone down of elation and energy follows when Swim Deep arrive. Swim Deep have a talent for pulling of this hobo chic extraordinarily well and it’s like, “How scruffy can I get before I start having pennies thrown at me?” They’re part of the B-town scene that was really exciting last year (to anyone who lived in Birmingham) and then they kind of simmered out of sight when Autumn came upon us and songs that worked nicely with a summer backdrop no longer remained relevant. The band haven’t changed that much, they’re still doing that Cyndi Lauper cover and are still making people between the age of 14-19 groove and then it’s all gone in a puff of hazy, dreamy smoke to be replaced by the master to their Padawan – Peace.

Arriving with a newly flame-topped barnet, Harrison Koisser is the epitome of indie cool. He oozes it. The new songs like ‘Money’ have a completely different vibe to the old stuff; It’s more catered for that London feel, cause Harrison and co have been pretty much holed up there. The blissed out grunge of ‘Follow Baby’ opens the show and the glimmer of Peace’s old flashes back. This crowd are weird though. No one is moshing to ‘Bloodshake’ or ‘Lovesick’. People normally lose shoes and dignity when that happens. This crowd is tame and clearly not enough alcohol is flowing through their bloodstream. ‘California Daze’ and ‘Float Forever’, too: people should have their arms around each other singing to the roof of the tent, but no, Peace’s crowd aren’t as rambunctious as one is used to. Doug isn’t as rowdy as usual either but Harrison is working them Brett Anderson, androgynous feels which elevates Peace back to that messiah status. 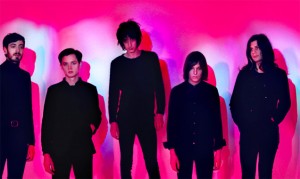 Oh, look Kings Of Leon are playing the main stage right now. But I’m not there. I’m still in the Big Top. Where I plan to stay. Because The Horrors are on. So, why did I choose to see The Horrors over Kings of Leon? Isn’t it compulsory for everyone to go and see the main act? Isn’t it really important? Matter of fact I’ve saw Kings of Leon before and yeah, not bad, sounded great, piss poor choice of songs and when it came down to choosing who to see out of tonight’s main acts it had to be The Horrors. A band that shouldn’t have been confined to the not-so-big “Big Top”. In fact, the smattering of people who turned up to see The Horrors was even more horrifying. This is a band that have been around for nearly ten years, re-defined their sound and style with every album all whilst retaining their cool and leaving their image untarnished. No one deserves to headline a festival more than The Horrors, but I guess tonight is understandable; Isle Of Wight caters to a wide divide of the credible and the mainstream and we all know which category The Horrors belong in. I must say, the light show is incredible; you can only just about see Faris’ gangly, looming demeanour in the hazy, limpid glow. Rhys Webb sounds amazing, an under-rated yet crucial bassist and Tom Cowan’s synth masks the whole thing in a glistening spectral buzz. The Horror’s reliance on the synth has been their ultimate chosen weapon in battle and makes for a truly mesmerising set. Sonically, you can’t fault these guys and it’s very clear to anyone standing in that tent that every single member is well attuned when it comes to music sense and knowledge. Then it all ends with the anthemic ‘Still Life’, an otherworldly end to an otherworldly festival.

Freelance writer, DJ and promoter at This Feeling
Can of Strongbow, I'm a mess

Can of Strongbow, I'm a mess
View all posts by Harley Cassidy →