Live At Leeds is always an interesting one. It’s that time of year we’re all eager for the sun to make an appearance, and long to be back in the fields with tinny in-hand and singing (badly) along to all of our favourite bands.

This year’s line-up made that dream seem like reality for many, but with less mud, squalor and sleep-deprived insanity. Live At Leeds 2017 brought out all the stops. Top international acts mixed with the city’s own musical wonders, showcasing them all together for the revellers to marvel at. 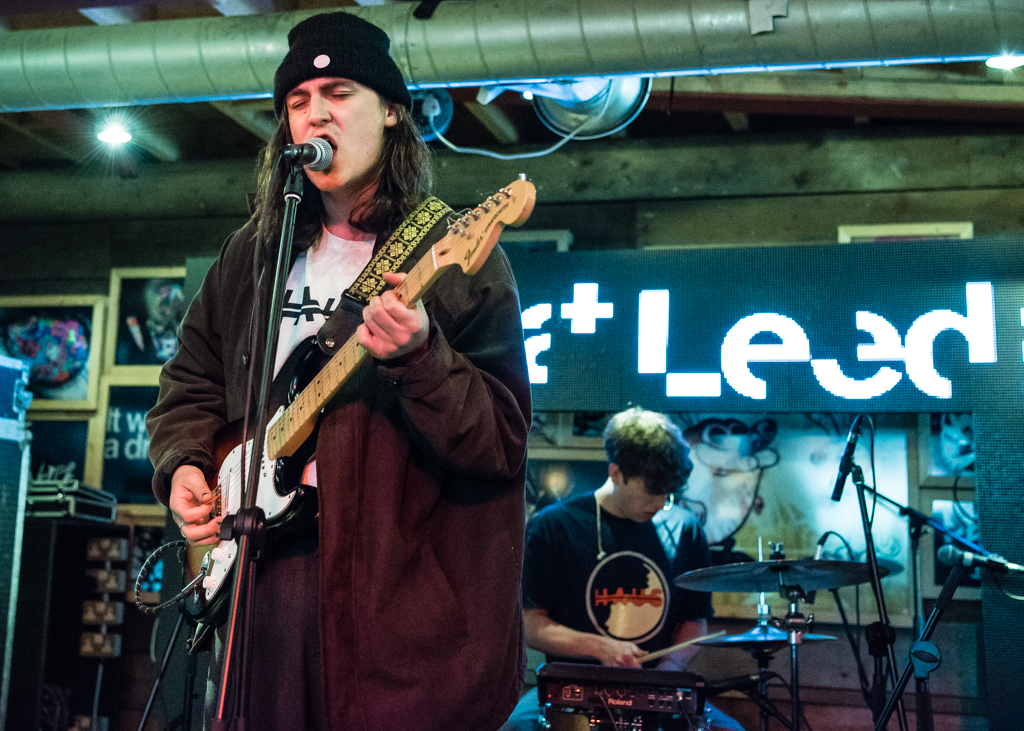 Not even the thought of an early start puts off the crowds. As the clock strikes 12, The Chapel is soon filled for Hartlepool’s PLAZA. A lack of mics and string of breaking equipment pushed back the midday kick-off, leaving the band to just sit it out and wait.

“Well, that was our first ever show! Goodnight!” bassist Will Hamilton jokes, before everything starts working in their favour so they can put on a proper rock show. Reverb drenched riffs and practised hair flicks put their set back on track. ‘Deep In My Head’ leaves the big fans up front singing their hearts out, while engrossing those nearing the back in the post-indie frenzy occurring on stage.

With Live At Leeds taking over the whole of the city centre, a 20 minute run down to the Wardrobe seems like nothing. We get there in time for locals jellyskin who’ve stripped themselves down for the festival.

A synth, guitar, pedal board and a scaled down drum kit is all the three-piece need to impress the growing crowd. Soothing vocals complement the scuzzy melodies and gentle yet bouncing beats so much guitarist Will Ainsley has to take his shoes off to fully feel the rhythms. 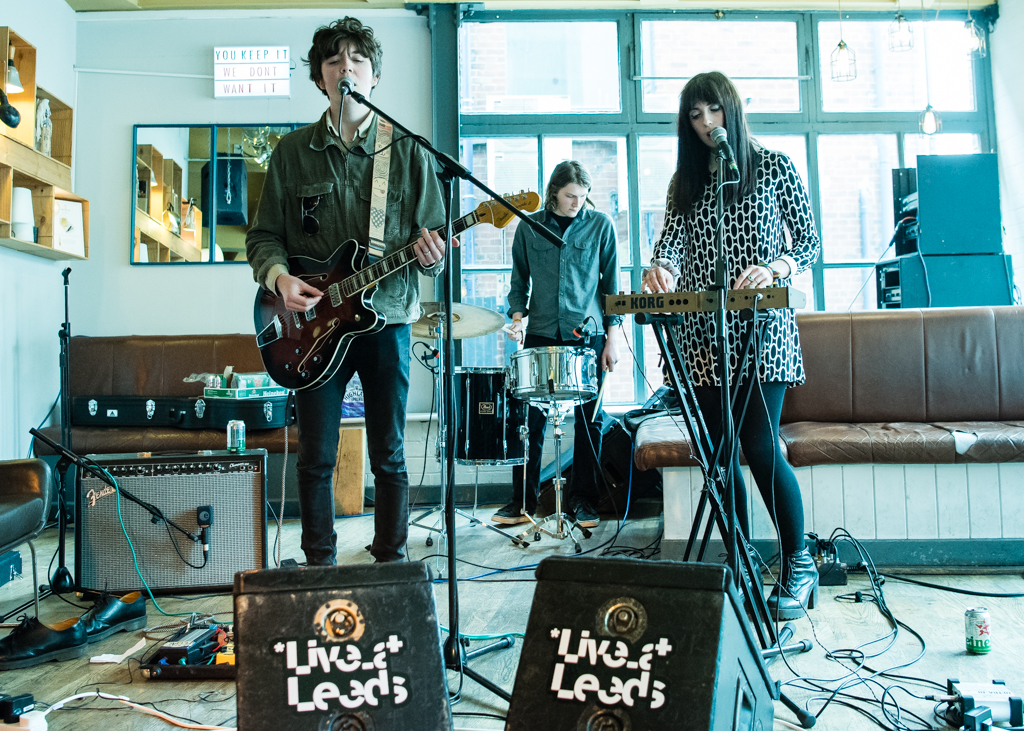 Chilled out on an armchair armed with his four-day old keyboard and trusty guitar, former Huskies frontman, Antonio Panzera aka Roe Green keeps the day on a more mellow note. He strums away to ‘We Don’t Talk Anymore’ with ease, urging you to contemplate alongside him, while ‘Perspiration’ perks up the mood with its slacker-indie jazz charm.

A venture downstairs in The Wardrobe leads us to Casey Lowry’s ear worming escapades. With just one single out, he isn’t afraid to command the crowd. With the floor of the room filled, the drop of his finale obliges everyone to squat waiting for the energetic impulse to jump and dance.

After a food pit stop, it’s time for the dream-pop of Fazerdaze. It’s nice to finally see the girl who leaves you absorbed into her jangling trance in your bedroom. She pulls us in with the lulling sounds of ‘Lucky Girl’, and keeps up the pensive tones in ‘Jennifer’. With the sun still shining outside, Amelia Murray’s summery allure makes the hope of good weather in the festival fields feel less of a fantasy by the second.

The faint sound of a 90s funk disco inside the other room at Beckett’s Students Union draws us in for boogie. The sight of the Brummie duo Ekkah’s synchronised dancing coerces the crowd to follow suit and hound out those not joining in.

Forget when James Franco and Seth Rogan told us disco sucks, they’re far from the truth. There’s iridescent glitter, dazing harmonies and electro melodies even Prince and Chic would be jealous of. 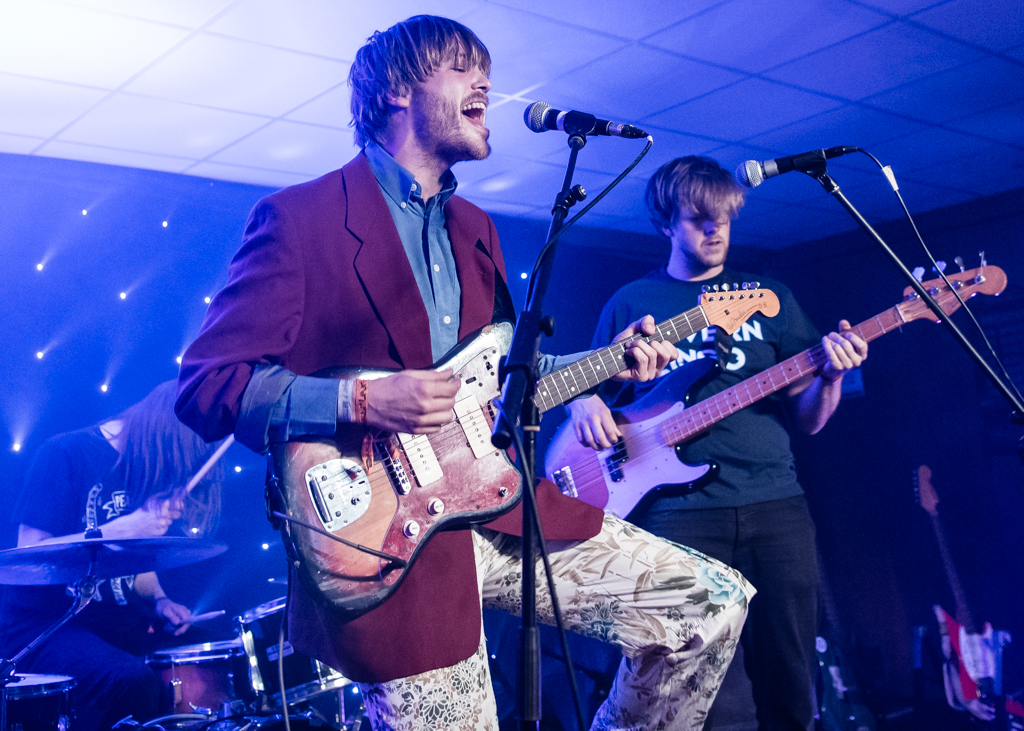 Far from the glitzy delights of Ekkah, the “diarrhoea rollercoaster” of Francobollo hits as soon as you enter the Brudenell Games Room. Their slips between frantic, jagged hooks and composed, soothing breathers go down a storm.  ‘Kinky Lola’ gets too much for them, with shirts getting ripped off in unison with the closing beats.

Ditties about having “Good Times” and everything being “Wonderful” entice the crowd to be on the crazy Swedes (and one outnumbered Brit) side. One brave lad gets pushed into the air, amazing frontman Simon Nilsson so much he stops in his tracks to go shake his hand. Their end is as full of life as their start. These guys really don’t give a shit, and that’s what makes them so great. They’re all about having a laugh.

Once again the call of dance pulls us into see someone new. Showcasing their off-kilt indie pop are Northampton-duo Ginger Snaps. Sample-heavy beats, psych riffs and catchy harmonies are what you need to get yourselves moving. It’s everything that shouldn’t work all shoved together is such a way that it’s made to work.

Not afraid to immerse himself into the spread out crowd, singer Jay Brook jumps off stage to get everyone as high on the sweat gauge as he is and try his luck at taking a swig from someone’s (aka my) drink. He chose the wrong person there. Gigslutz apologises. 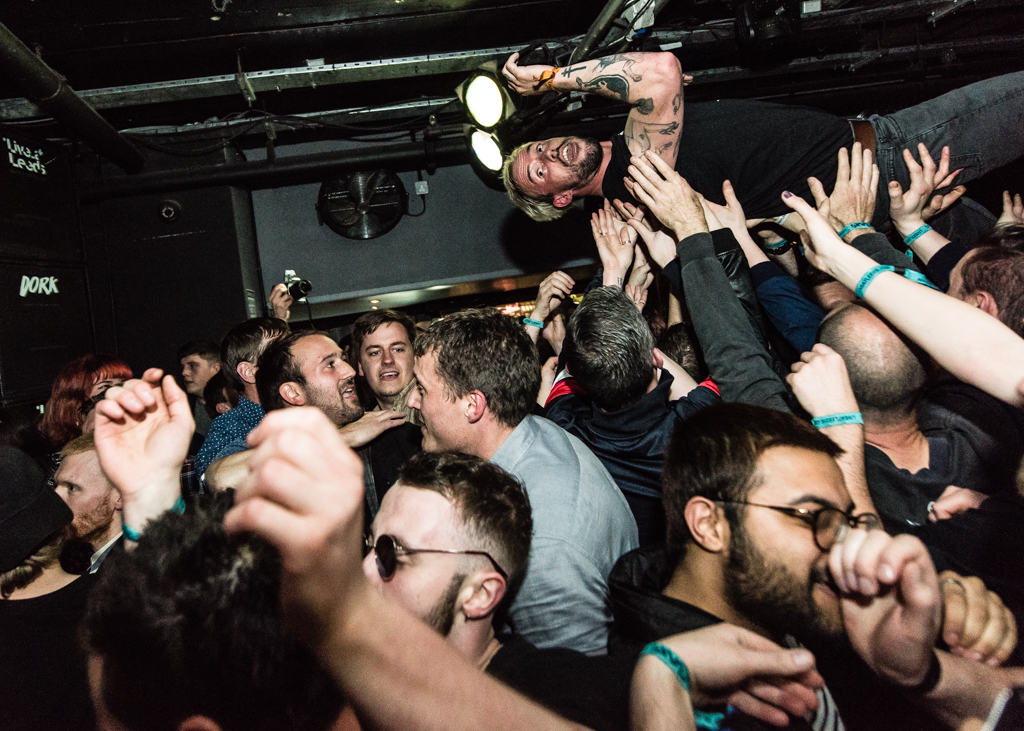 The dark, sweaty Key Club can’t handle the rumours spreading about Idles’ raucous performances. The venue gets packed out as fans pile in keen to get a taste of the Bristol post punk quintet. Bodies bouncing in all directions with stage diving and crowd surfing aplenty and it’s a wonder my camera made it out in one piece. Catch them while you can at these small venues.

“Are we ready?” asks vocalist Rakel Mjöll, before launching in the “hey hey heys” of ‘Hey Heartbreaker. Half an hour of infectious tunes and guitar riffs. Dream Wife are on top form again’. 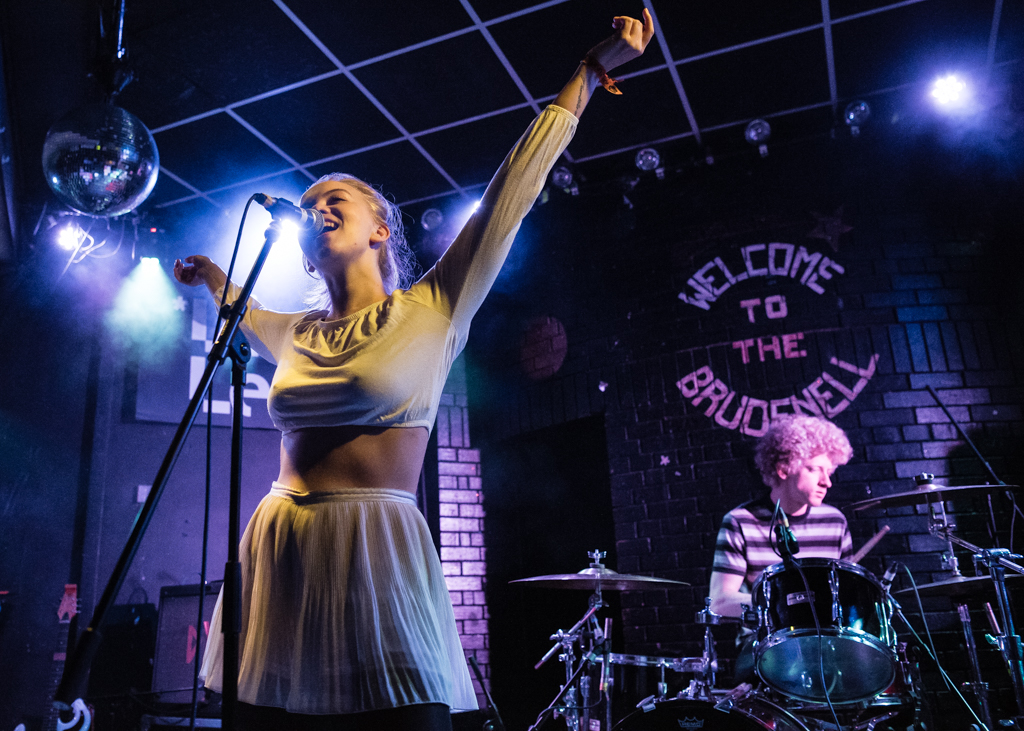 The fresh electronic sounds of Haus brandish themselves in Headrow House. With the room packed nearing capacity, the London boys head out to soak up all the love Leeds has to offer. Their atypical beats collide with the soulful vocals of Ashley Mulimba, making their dynamic take on indie rock cause one last party.

There’s no space to be had on the pews or surrounding floor as fans eagerly await Gabrielle Aplin’s closing set at Holy Trinity Church. The singer songwriter flies solo tonight on her acoustic guitar and keyboard with occasional backing fills from keen fans in the audience! Nothing but a beautiful set. 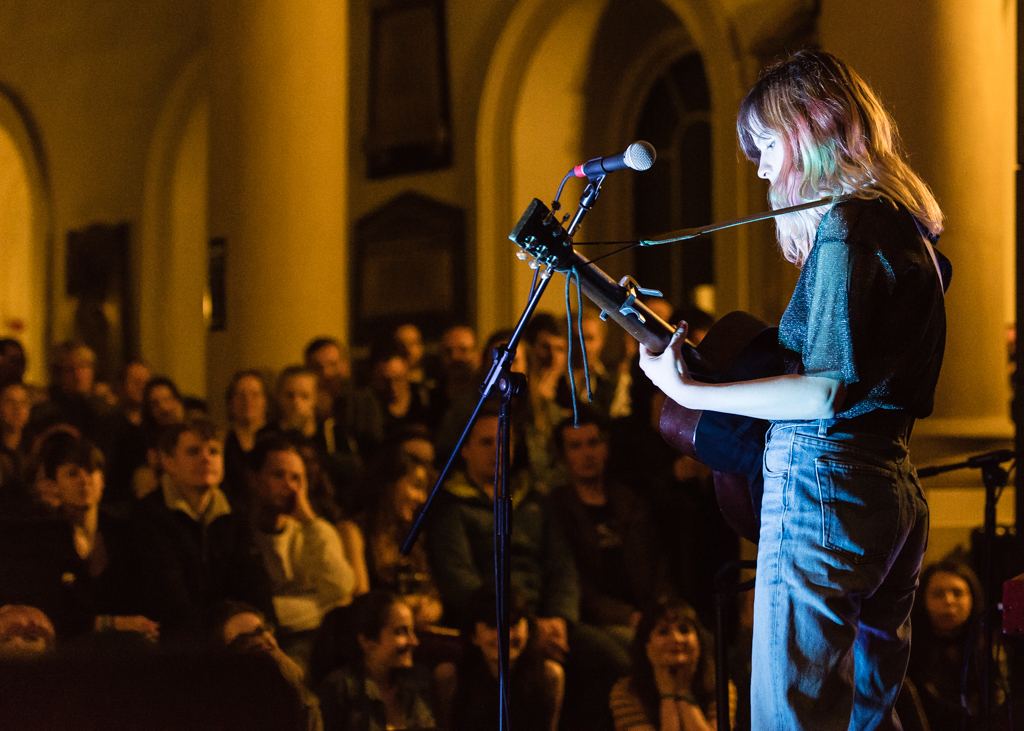 The main thing about Live At Leeds the flaunting of new acts across the line-up. They want you to discover new music, and make it as easy as possible. A headliner at 3pm so a smaller band will catch their fans afterwards? That’s standard. If you’re a fan of uncovering new talent, then this is the place to be. 11 years strong, and Live At Leeds is still one of the best festivals you’ll ever be a part of.

Check out the rest of the snaps our photographers Jon and Lucy took across the day! Part One & Part Two.