“Our band name relates to people not being in control of their day to day lives. Slaves was our way of getting off the paths we didn’t want to walk down anymore. The music we make is motivational and aimed at people personally as well as collectively.” 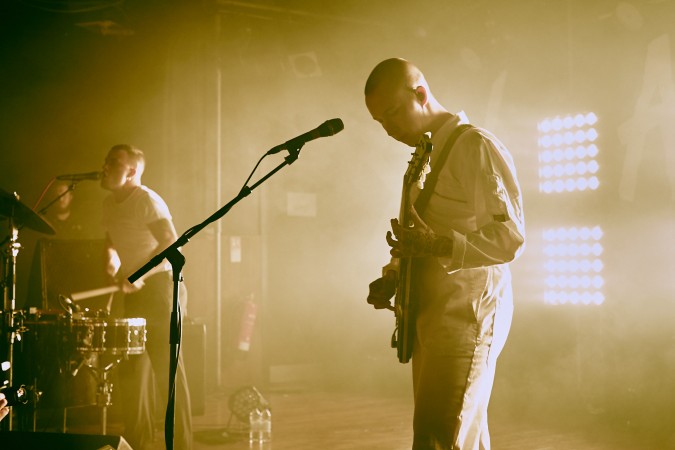 Recently reacting on their official Facebook page, Slaves defended their chosen band name in result of their ever-growing popularity. Taking to the stage for the first of a two-night stint at one of London’s more elite music venues, Scala, Slaves showed exactly why they were deserved of that attention, and more importantly why they are ones to sit up and take note of.

Support came in the form of Glaswegian trio, post punk boys Baby Strange and the hilariously punk rock mayhem band Wonk Unit. Both successfully managing to stir a rebel rousing performance from the crowd; the event was full of energy before Slaves even took to the stage. Crammed full of both youngsters tasting their first flecks of punk and old school rockers alike, gloriously reliving their rebellious youth, the crowd was anything but quiet.

Striding on stage in a white jumpsuit emblazoned Man Of Kent, guitarist Laurie Vincent shouted, “Alright, we’re Slaves and We’re from Kent”, before breaking into the adrenaline fuelled ‘White Knuckle Ride’. Isaac Holman, in a similarly scrawled ‘Kentish Man’ white tee, thrashed at his drums like a man possessed as the heated up crowd embarked on the first of their crowd surfing, mosh pit dancing. “Some girls grow up, but they still can’t keep their underpants on,” drawled the lary lads as they climbed into track ‘She Grew Old’ – another undeniable crowd pleaser. 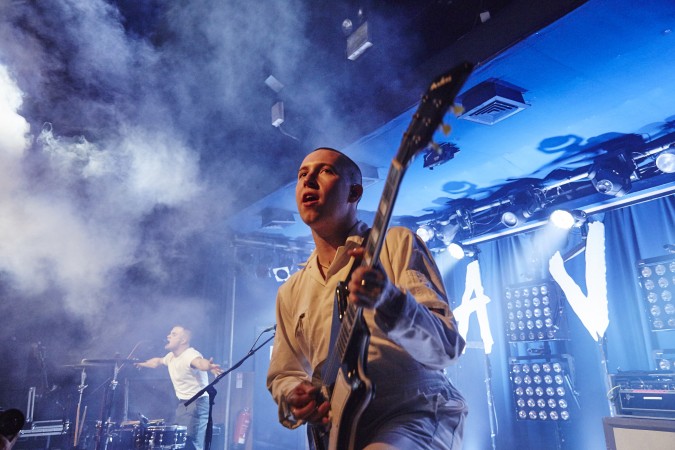 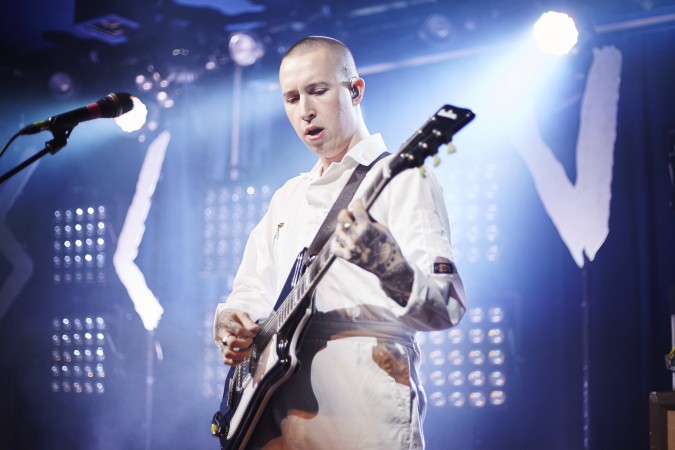 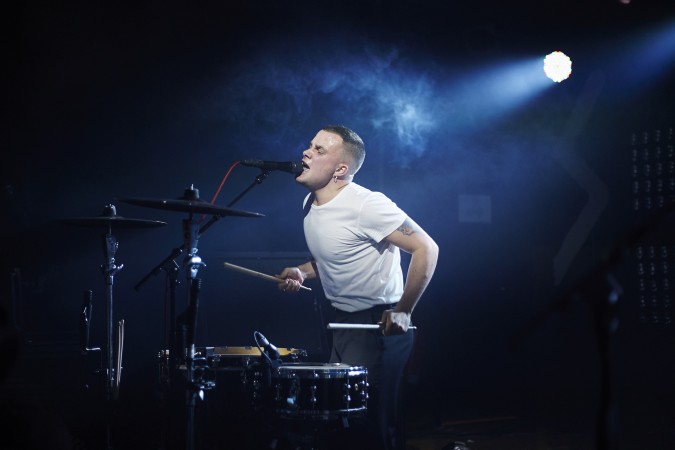 Showing no efforts of slowing down, hammering on their instruments, Slaves broke into ‘Live like An Animal’ quickly followed by ‘Sockets’, as more clunky lyrics and chaotic riffs were thrashed loudly. The boys stage presence is undoubtedly energetic, as they appeared to hold a mutual adoring rapport with both fans and each other. The sense of sweaty inclusiveness was rife as the boys called up one of their “journalist friends” who recently admitted he had never crowd surfed. Mischievously encouraging the more than up for it crowd to “carry him throughout this next one” they broke into most recent single ‘Cheer Up London’. The track is greeted with unsurprisingly righteous reaction as the duo brashly address anti government, anti sadness messages through boisterous percussion and brash throaty vocals.

Tongues pressed firmly in cheeks, the talented loveable rogues hit the crowd with ‘Feed The Mantaray ’, inarguably their least serious contexts of numbers with even drummer Isaac exclaiming “what a stupid fucking song”. Yet the mass of writhing limbs lap it up unquestionably, with inexplicably weird lyrics hoarsely chanted back. Sweatily embracing on stage, the wide grins on the duos faces never seemed to slip once as Slaves continue to look like they’re having the time of their lives. ‘Ok’ and ‘Bad Machine’ were up next, tracks that guitarist Laurie admits they rarely play live. 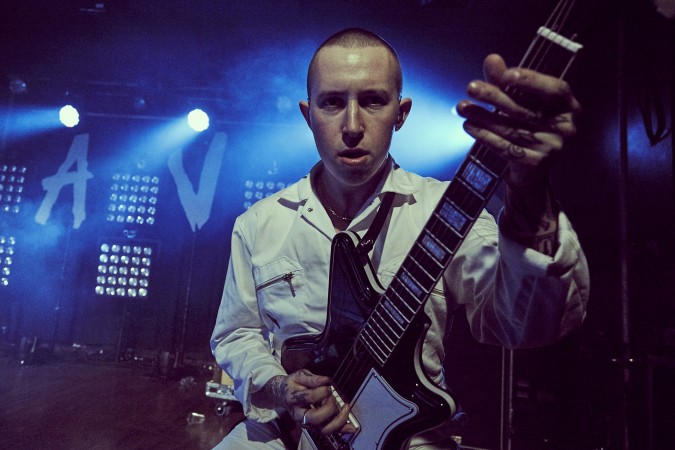 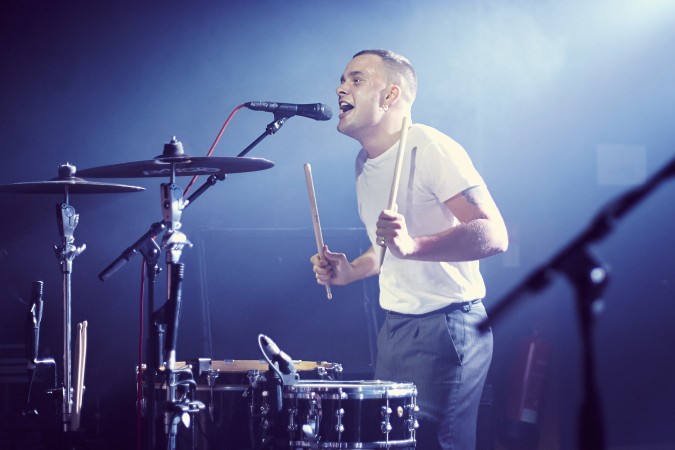 “We need to slow things down a little,” spits Laurie as the two begin to teasingly commentate the introduction for the next song, telling the tale of Big-Foot in the woods as they walk a girl back to their car… ‘Where’s You Car Debbie?’ has an infectious riff that would make the likes of Royal Blood go weak at the knees. Bringing the lights up, shining on red, sweating, captivated faces, the boys have the crowd in the palm of the hands as they unexpectedly make the venue go as quiet as possible, so they can climax into ‘The Hunter’, an easy highlight of the set. Garage punk with anarchy and disorder fuelled riffs, ‘The Hunter’ holds the promising ingredients for a true punk revival anthem.

All form of manner and regulation, or what little was left, flew out the window with closing track ‘Hey’, as both lads jumped into the crowd, carried by the legion of revved up revellers. Friends of the band, members of support groups and whoever else dared, leaped onto the stage before throwing themselves into the arms of the fucking mental crowd. The chaos continued for minutes as forgotten instruments reverbbed. At some point in the midst the lads saunter off stage as bizarrely, but so, so fittingly, BoyzIIMen’s hit ‘End Of The Road’ plays. Piling out of the venue, the buzz Slaves conjured was still electric amongst its crowd. Creating music that is a refreshing antidote to the mundane, Slaves are onto big, big things. 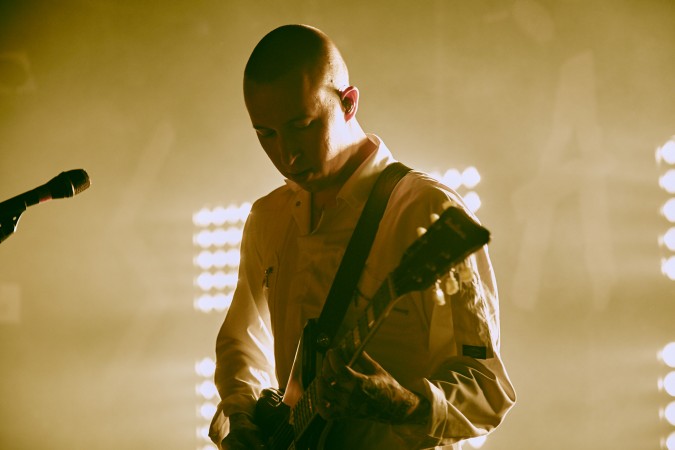 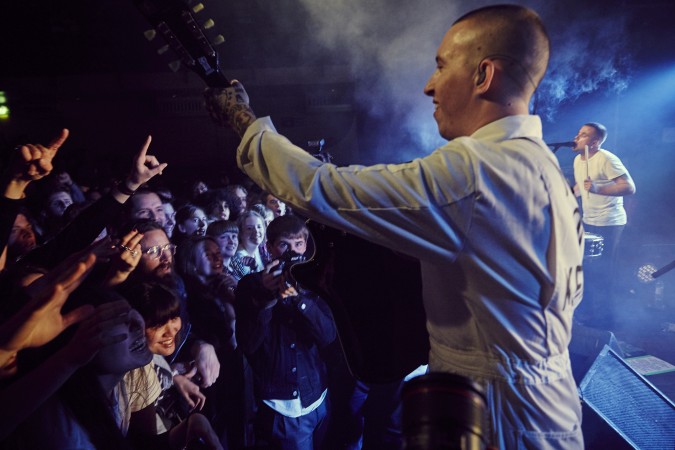 “Our name and music is aimed at being a slave to day-to-day life and routine. We are all slaves in this modern age, whether it be to our jobs, corporations, social media or society in general, we are all in this together.”