Don’t they always say the devil has the best tunes? Gypsy-blues collective The Urban Voodoo Machine certainly think so. After a rough period that saw them lose two members to cancer and a heroin overdose, the band bounced back with their fourth album Hellbound Hymns. The record is both defiant and introspective, like a big night out and the morning hangover rolled into one.

Tonight they have stopped by The Tabernacle on their Lucky 13 Tour for the album’s London launch, bringing with them a motley crew of musicians, sword swallowers and fire dancers. With a dead man playing fiddle and the devil on guitar, it’s set to be an interesting show.

Our guide across the River Styx this evening is frontman and Urban Voodoo lynchpin Paul-Ronney Angel. His rough, rolling vocal cuts through the room as he leads the crowd in a sing-along during ‘Fallen Brothers’, a rousing tribute to lost friends, but this is nothing if not an ensemble act.

The Urban Voodoo Machine’s live show is like cabaret performed by the occupants of a particularly bohemian cemetery. The hulking, green drummer, the devilish guitarist, and bold vocalist Lucifire make for a captivating live show. It speaks to the group’s performance pedigree that when Paul-Ronney Angel leads them into the crowd for a fire-dancing interlude, it does not seem like a jarring shift. 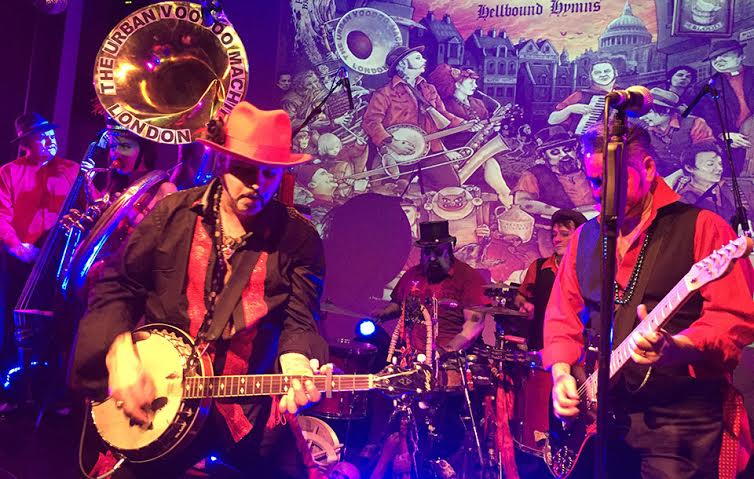 The band continue playing to a dancing crowd well after the lights come up, and when the venue’s sound team drowns the music in white noise they find themselves on the receiving end of an outcry from the floor.

The Urban Voodoo Machine want to take you to hell in a guitar case. You’d be remiss to turn them down.