Now in its tenth year, Wireless is essentially a festival for those who don’t fancy the full festival experience: Three stages of music from 1.30 until 11.00pm (at the very latest) over two sites at London and Birmingham. While initially headlined by the cream of the rock crop (Kasabian in ’05, The Strokes in ‘06 and The White Stripes in ’07) it has filtered through P!nk and Black Eyed Peas to become, well, a festival for people who don’t fancy the full festival line-up experience. Even more bizarrely, this year saw Kanye West headline the Friday and Saturday at London following Drake’s last minute cancellation, while Birmingham were given an extended Rudimental set and £20 back in some sort of tokens… Wireless Wonga maybe? (Having witnessed Kanye’s extended speech on Friday, I know which I’d have preferred. But much more on him later, although not as much more as he might like.) 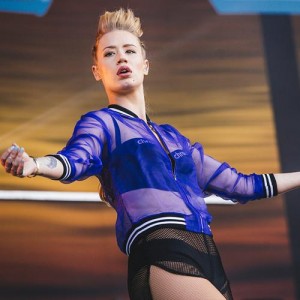 Iggy Azalea strutted the main stage for a short but sweet seven song set. While she’s not quite as mesmerizing as her contemporaries (with hits that aren’t quite as memorable) she draws a huge crowd, bringing out special guest Rita Ora for ‘Black Widow’. Over on the ‘Pepsi Max Stage’, Angel Haze (who leaked her own debut album at the end of last year) continued to ignore rules by spending the majority of her set meandering through the audience, resulting in a crowd of smart phone owners seemingly simultaneously struggling for network coverage. While it may seem unprofessional to compare the two acts based purely on the fact that they are female rappers (after all, the whole bill is predominantly rap artists of either sex), Angel’s stories seep from her soul while Azalea half-heartedly attempts dance routines between pouts rather than shout-outs. Backed by her band, and with a crowd a tenth the size of Iggy’s, Angel Haze reveals the passion that forced her to leak Dirty Gold through the honesty of autobiographical tracks, including ‘New York’ and the Sia featuring ‘Battle Cry’.

Pioneer of electronic and dance music Giorgio Moroder may be old enough to be the grandfather of the entire audience (and the majority of the acts) but his DJ set has them all on their feet. Blending his own classic compositions (‘Together In Electric Dreams’, ‘I Feel Love’) with some of his more recent outings (Daft Punk’s ‘Giorgio By Moroder’) and disco favourites from others (Blondie: ‘Call Me’), he may not have the energy of Cassidy or Fresh, but DJ Giorgio (as we, his friends, are allowed to call him) can command a crowd with the touch of a button and the sequence of a synthesizer. 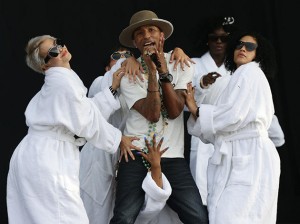 In a similar style, Pharrell (and his hat)’s show is the Greatest of all Greatest Hits sets. Refusing to be one of those artists who annoyingly ignore collaborations where they weren’t first-billed from their own sets, Pharrell provided hit after hit regardless of whether he wrote, produced or sang the track. And in many cases it was all of the above, and beyond. From N*E*R*D’s ‘Lapdance’ and ‘She Wants To Move’ to “the early years” (‘Hot In Herre’, ‘Frontin’’, ‘Drop It Like It’s Hot’), the Daft Punk stuff, Girl numbers (‘Marilyn Monroe’, and surprisingly only his second solo LP) and, naturally, ‘Happy’, it was a tour de dance which even managed to blur over the Robin Thicke verse. (Although, the majority of the crowd were probably responsible for the success of the track.)

And so to Kanye, Part One. His marriage to a Kardashian and beyond odd outbursts may be what has kept him in the press in recent months, but musically he is undoubtedly one of the most innovative rappers of our time. Opener ‘Black Skinhead’ highlights this, the march of the drums and the angst in the vocals both stronger in a live setting, but it’s the beaded mask which covers the majority of his head that creates the most attention. Despite this he ploughs through the later singles (‘Mercy’, ‘Cold’, ‘Clique’) without referencing his head-piece, before the Daft Punk sampling ‘Stronger’ almost appears to allude to some of the earlier hits, which are soon replaced by a video of a waterfall (on a huge, impressive screen behind West) and a rendition of ‘Runaway’, featuring a rant that leads to walk-outs, sit-downs and boos.

“What did Kanye do wrong?” he asks a confused audience, before finally revealing the reason behind the mask (“FUCK MY FACE! This is about my dreams…”) and discussing the idea of celebrity at length, but failing to mention those fame-hungry families who invite cameras into their homes for the absolute maximum amount of seconds of fame. It’s an unexpected and unappreciated event, with Kanye perhaps seeing himself as MLK (with random vocoder moments throughout) but coming across like some CBB (that’s Celebrity Big Brother) sap having a Vanessa Feltz style breakdown. Finally, the anthems come thick and fast (‘Diamonds…’, ‘Heartless’, ‘Touch The Sky’) but it’s too late and too fast, with each merely given a verse and a chorus, and some fans already on their way to the tube. 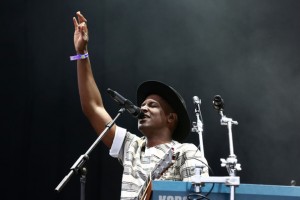 Following a sleep on a mattress and a morning shower (bizarre luxuries considering I’ve told friends I’m at a festival all weekend), Azealia Banks – still yet to release a full length album – fills her 35 minutes with bangers including ‘Liquorice’ and ‘212’ (and a surprisingly stunning acapella moment), before Labrinth brings it back to Blighty, dressed as The Hamburgler, strangely. Backed by his band and with impressive guitar skills, his undeniable knack for production has provided him with Radio 1 friendly hit (‘Let The Sunshine’) after hit (‘Express Yourself’), including the Emeli Sande duet ‘Beneath Your Beautiful’, which provides one of the few, tender, huge singalong moments often associated with more traditional festivals.

It appears that a festival line-up is not a complete line-up without Rudimental appearing somewhere on the bill, but this is in no way a criticism of the act or the organisers. While the crowd are already merry (£5 a pint!), Rudimental provide the shots in the form of songs impossible to not jump to (thus mixing the Tuborg with whatever was downed on the journey) making for a whole-crowd-as-one moment, from a band whose members and guests are vast but whose output is relatively small. Whether it’s the turn of one of the backing vocalists or special guests Ella Eyre (‘Waiting All Night’) or John Newman (‘Not Giving In’, ‘Feel The Love’), each track from their debut (and only) album is an instant firestarting, party anthem, and they appear to love it as much as the crowd.

Kanye Part Two begins just as Part One did. Beaded mask: check, ‘Black Skinhead’ followed by ‘’I Don’t Like’: check. A shoutout to “my homeboy, who couldn’t make it” preceded a medley of Drake numbers, and for a moment it seems that someone might have had a word in his ear, mentioned the boos from the back of the crowd and told him that he was booked to rap, and “sing” (in inverted speech marks larger than the very large screen behind him). Once the screen began to show a waterfall and Kanye began to “play” (even larger) the keyboard, it became pretty obvious that the rant was a part of the setlist that was not negotiable.

“I know you don’t believe this but I’m shy in real life,” the mouth behind the mask on loan from Gaga and Bane’s lovechild told the tens of thousands of people from the stage in London. Putting a positive spin on things, Kanye actually provided a rare toilet break during a headline set and, despite the fact that everyone else in the surprisingly-long-for-headline-show-time queue to the loo (and bar) thought the same, Kanye was still talking following a slow stroll from the guest section. (Not that I’m a celebrity, man! I hate that shit!) He’d seen the reviews of the night before, boring the crowd by now with how he thought it was “really interesting, the papers wrote about it in a negative way…” before finally reaching the greatest hits in a mega mix styley (Do you know that friend who skips every song half way through..?), including ‘Good Life’, with the line, “I’mma get on the TV, Momma!”

“It’s today, the thing you’ve been waiting for and saving up for is today!” crooner John Newman reminds the crowd, before quickly assuring them that this isn’t the start of a Kanye rant: “It’s just talking.” Newman repeats one of his Rudimental numbers, ‘Not Giving In’, from the night before (no complaints here) before closing with #1 ‘Love Me Again’. Inkeeping with theme, natural treasure Ellie Goulding focussed her set on her more dance-orientated numbers (‘Goodness Gracious’, ‘I Need Your Love’, ‘Burn’) with no stunning ‘Explosions’ in sighe, or sound. She might get knocked for her twee background or a certain wedding disco gig, but look no further than the electro-epileptic outro to ‘Figure 8’ or the so simple it soars style of ‘Anything Could Happen’ for well crafted, self written pop. 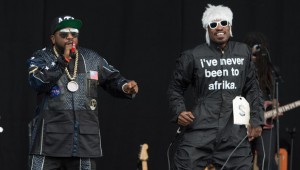 The rain may have poured on OutKast’s first UK show for many years, but it would have taken a tornado to have let mere weather ruin what was arguably the highlight of the entire weekend. Covering four of their six LPs together, the duo began their set together, with Andre 3000 dressed to impress in a jumpsuit (with “I’ve never been to afrika” written on it) and awhite, pixie-cut wig, and Big-Boi keeping it real in shades, a cap and bling. ‘Ms. Jackson’ provided the first mass singalong (although every beat previously had been moved to), before the two took it in turns to perform songs from their sides of their iconic double album. Big-Boi opted for ‘The Way You Move’ (what else?) before Andre invited a long line of females – including some of Little Mix – to shake it like a you-know-what for ‘Hey Ya’ (what else?!), which would have presumably been the last number, but is neither under nor over shadowed by ‘Roses’ and ‘So Fresh, So Clean’. They all simply work. Before bowing out with ‘The Whole World’, Andre 3000 reminds the audience of the meaning of the group’s 20-year old year name (after all, the meaning of a name said too often can inevitably lose its initial meaning). “We don’t do this for the blacks. We don’t do this for the whites. We don’t do the for the purples. We don’t do this for the gays. We don’t do this for the straights. We don’t do this for the flippety-flop people who haven’t decided yet.” So here’s to OutKast, and all of the outcasts. May these words be around forever-ever.

Bringing the weekend to a close, Bruno Mars brings a set that’s dripping in Michael Jackson influences. From the routines with the band members to the punchy pop numbers, it might not be your usual Gigslutz event, but his range is effortlessly insane, while punchy songs including ‘Locked Out Of Heaven’ and ‘Treasure’ will no doubt top many a guilty pleasure list. And so, by not much later than 10.00pm on Sunday, before it’s even dark, the festival comes to an end. No last night, tent-tripping trips to the late night venues. No impromptu acoustic areas. The plug on Wireless has been pulled, the beds beckon and the Finsbury Park station will see queues for 90 minutes or more. Focussing on the music, however (because while we say the festival experience isn’t about the line-up, it’d be pretty quiet without one) Wireless provided the acts, the songs and the memories they make. For that break between festivals you feel like you need, while still wanting at least some of the festival atmosphere, it could be the perfect trip. And not a long-drop in sight, or sound.