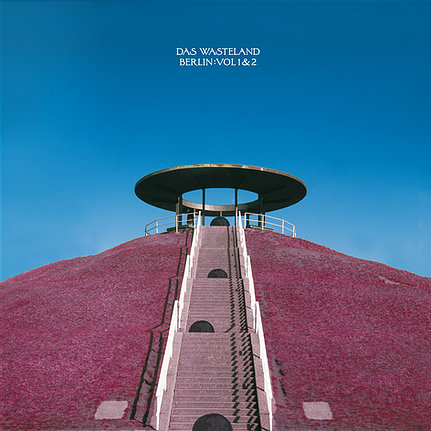 A passion project that started life as a limited 250-edition record capturing the universal sounds of a handful of locked-down Berlin-based musicians, the 1,000-copy double vinyl also features local musical luminaries Stony Sugarskull, Hello Pity, Berlin Diaries and Otto Von Bismark, in addition to internationally-acclaimed artists such as King Khan and Saint Leonard. Das Wasteland Berlin Vol 1&2 marks the birth of the eponymous record label, which eased into existence towards the end of 2020 when the lights remained off across the city that never usually sleeps. Das Wasteland Berlin: Vol1&2 centrefold. Designed by Stephanie Hamer. Photo by Martyn Goodacre

“The idea of creating an outlet to continue celebrating the incredible musicians and artists that call this freewheeling, free-spirited city home — both literally and spiritually — arose when it became clear that the venues, clubs and bars woven into the very fabric of Berlin wouldn’t be re-opening for the foreseeable,” co-founder and music photographer Martyn Goodacre says. “Ultimately, it’s a testament to the talent of the artists and the spirit of the city how cohesively the collection turned out”

Best-selling author Rob Doyle and acclaimed musician Saint Leonard, who contributed the track ‘History’s Children’ and also co-authored the sleeve notes, summed up the compilation as “a sonic polaroid of musical culture in this most mysterious city — captured as it is right now; a distillation of the global talent and mellifluous music genres cascading down the Straße day and night.” Das Wasteland Berlin: Vol 1&2 is available for pre-order at https://www.daswasteland.com/shop and will be available in stores from 15 August 2021.

It was on those cruel and unusual Berlin evenings towards the end of 2020 when the lights remained off across the city that never usually sleeps that Das Wasteland Records eased into existence. Against a backdrop of calamity, curfew and confusion, it became clear that the venues, clubs and bars woven into the very fabric of the city wouldn’t be welcoming musicians and revellers for foreseeable. So, with the help of a couple of friends, countless late nights and a few too many Spätburgunders, music photographer Martyn Goodacre conjured up an outlet and an opportunity to continue celebrating the amazing musicians and artists that call this freewheeling, free-spirited city home — both literally and spiritually — whilst encapsulating the vibrations of a new decade: the sound of the roaring twenties.

This Feeling Track of the Day: The Native ‘In My Mind’

This Feeling Track of the Day: Gallus ‘Perfect Ending’