The Early Years of Factory Records

Rarely and never-before-seen photographs, artwork designs, artefacts and instruments that made the music brought together for the first time.

Use Hearing Protection: the early years of Factory Records 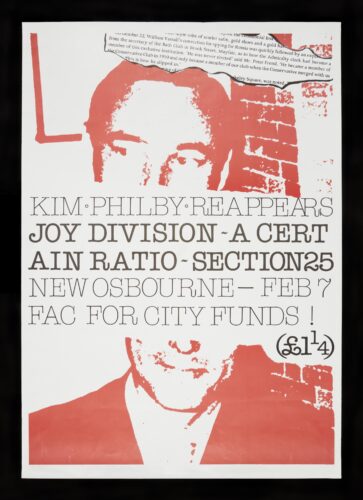 Beyond and before Madchester, Factory Records was the impossible dream of idealists, radicals and aspirational upstarts in a post-war, post-empire Britain where nothing and everything seemed possible, depending on how much you stood to lose. Inspired by situationist literature and imagery, spiked with Tomorrow’s World technologies and ambitiously internationalist while being rooted, stubbornly in the north, there wasn’t – and isn’t – a record label of compare. Now, the story behind its remarkable beginnings is reborn, expanded and re-evaluated. 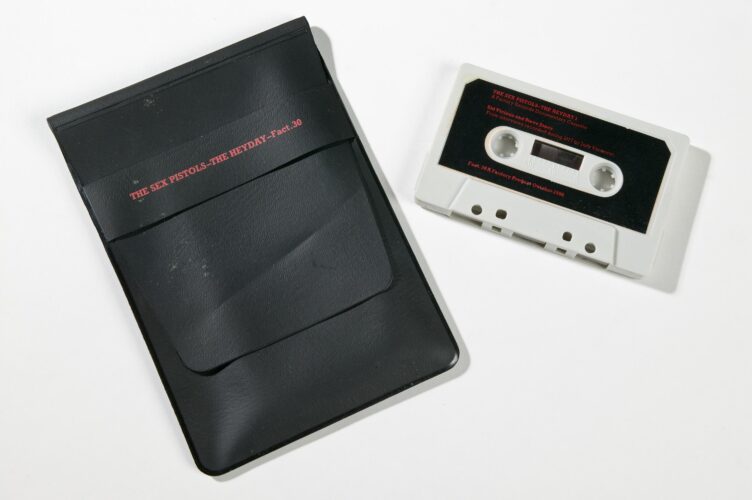 Following the inevitable interruptions of the Covid-19 pandemic, the Science and Industry Museum in Manchester launches Use Hearing Protection: the early years of Factory Records – a new exhibition that makes a long-overdue appraisal of the fiercely independent label away from the later glare of the Hacienda. It will now run from Sat 19 June 2021 until Mon 3 January 2022.

Through lesser-heard voices and seldom-seen physical evidence, visitors will be invited to explore label’s uncompromising roots, its relationship to the tough and unloved post-industrial Manchester of the 1970s and the family of forward-thinking creatives, musicians and other collaborators who shared in the founders’ ideals. With focus on the years 1978 – 1982, revealing more of both the history and the legacy of the label as a consumer of and catalyst for innovation in the UK’s music and wider creative industries, the exhibition has been curated by the Science and Industry Museum in association with consultant curators, the journalist, author and artist, Jon Savage and curator and archivist, Mat Bancroft, and Warner Music UK. 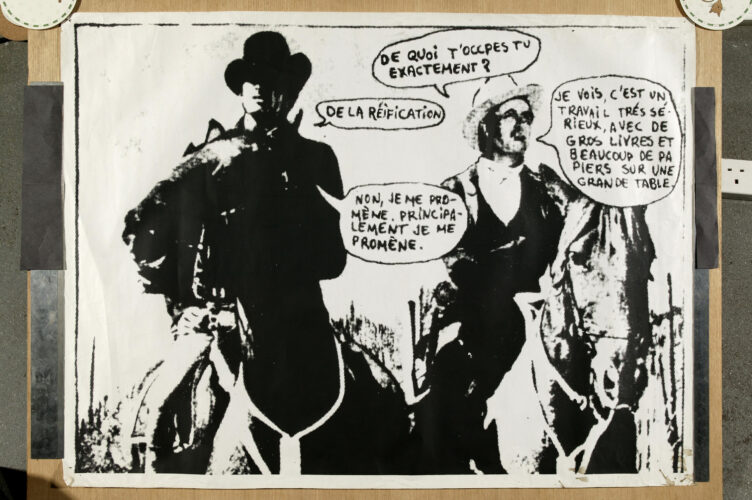 Durutti Column/Situationists promotional poster for The Factory, 1978.
The Situationists-inspired poster promoting The Factory was printed at the same time as Peter Saville’s FAC1 poster and is the first piece of publicity material commissioned by Anthony Wilson. This black & white poster was posted around the City as an abstract promotion for The Factory. It was later reproduced in colour to promote The Durutti Column. The posters were produced on the landing of a block of flats in Mersey Mansions, between Palatine Road and Barlow Moor Road, West Didsbury, occupied by Anthony Wilson and Dimitri Grilliopulous.
Matthew Norman’s collection of poster relating to the Manchester music & creative industries.

Starting with the birth of an idea by charismatic Granada TV journalist Tony Wilson and former actor, Alan Erasmus, the fascinating early story of how the independent label came to shape the city it called home is told. Use Hearing Protection introduces and makes sense of the key creative and business decisions that intentionally, and sometimes accidentally, led to the world-famous stories of the Hacienda, New Order and Happy Mondays that followed. 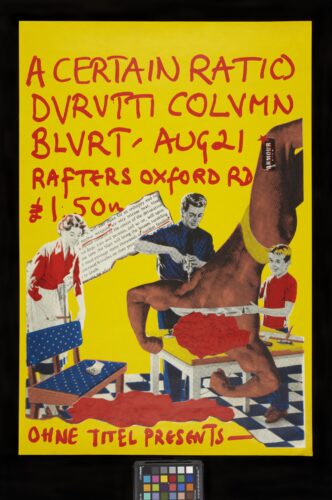 As well as a giving exclusive insight into the period through evocative visuals and rarely-seen objects, Use Hearing Protection will transport visitors back to the label’s early years in its ‘Gig Room’, where the sounds of Factory will be played out through large-scale projections of its inaugural bands. Visitors can also get hands-on with technologies of the time by using a mixing desk to create their own take on an original Factory Records’ track, and feel as though they’re part of the recording of Unknown Pleasures by experimenting with a synthesiser. Audiences will need to bring their own headphones to plug in and play.

Jan Hicks, lead curator of the exhibition at the Science and Industry Museum, says:

“This is an unmissable exhibition for anyone eager to explore the origins of this influential label and its long-lasting legacy. The early years of Factory Records did so much to influence the city and the UK’s creative industries today, and this exhibition explores why Factory’s unique development could only have happened in Manchester at this time and involving this group of people. 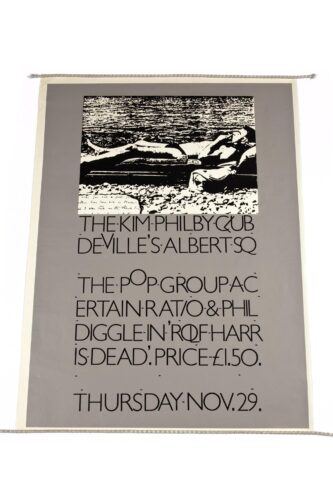 “It’s a story that the Science and Industry Museum is uniquely placed to tell. Factory Records was hugely influenced by Manchester’s industrial heritage, which we sit at the heart of, and was hugely progressive in its use of digital and electronic technologies, which are again core focuses of the stories we tell here at the museum.

“This is a hugely exciting exhibition. Having been originally planned to take place last year, I’m delighted we’re finally able to bring the experience to our visitors. We’ve taken the additional time to expand the objects and stories available, giving audiences access to a rich collection of Factory artefacts, first-hand accounts and immersive experiences that transports them back to an era where Manchester’s contemporary identity was formed.”

Use Hearing Protection: the early years of Factory Records at the Science and Industry Museum is a new exhibition that reinterprets and expands on an exhibition hosted in 2019 at Chelsea Space, London. It is supported by the players of the People’s Postcode Lottery and will be located on the first floor of the Science and Industry Museum. Tickets are available now, priced at £8 for adults and £6 for concessions, with under-12s going free. 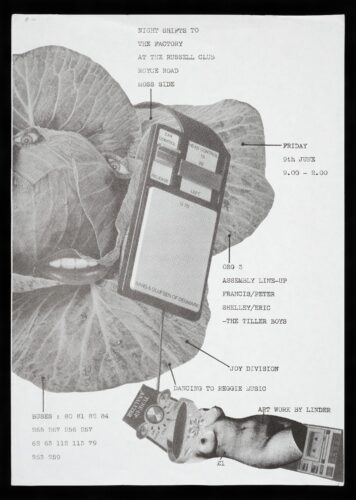 For exhibition updates and the latest booking information, visit www.scienceandindustrymuseum.org.uk/whats-on/use-hearing-protection or connect with the Science and Industry Museum on social media at: 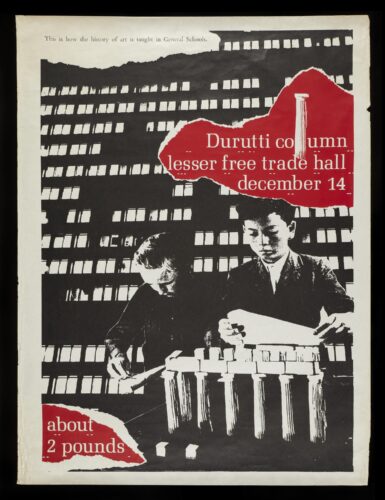 ABOUT THE SCIENCE AND INDUSTRY MUSEUM

The Science and Industry Museum reopened on 19 May following a period of closure during the national lockdown. It is currently undergoing a multi-million-pound restoration project. As well as the now-complete Special Exhibition Gallery, the much-loved Power Hall is being renovated, and improvement works are currently being made to the historic 1830s Station and Warehouse, the world’s first passenger railway station and the oldest existing railway goods warehouse respectively. These areas will remain closed until works are complete. The historic Air and Space Hall is also currently closed due to essential maintenance and conservation work, but there is still plenty to do see and enjoy, including another temporary exhibition, Top Secret: from ciphers to cyber security.

The Science and Industry Museum tells the story of where science met industry and the modern world began. Manchester was one of the first global industrial cities, and its epic rise, decline and resurrection has been echoed in countless other cities around the world. From textiles to computers, the objects and documents on display in the museum tell stories of everyday life over the last 200 years, from light bulbs to locomotives.  The museum’s mission is to inspire all its visitors, including future scientists and inventors, with the story of how ideas can change the world, from the industrial revolution to today and beyond.

The Science and Industry Museum site is on the site of the Liverpool Road Station terminus of the Liverpool Manchester Railway, the world’s first purpose-built passenger railway. Among its internationally significant buildings are the world’s first passenger railway station and the oldest existing railway goods warehouse. In total there are two Grade I listed buildings and four Grade II listed buildings on the site.

This Feeling Track of the Day: Dovv ‘Summer’