Whilst one man in the world thinks his deluded hatred filled actions will make him a hero as he tries to destroy the liberty of families and nations plus the freedom of the human race, a far more courageous and morally dignified group of individuals have come together to bring a message of defiance and peace in the face of such squalid attacks through the universal power of music and comedy.

Martin Rossiter, lead singer with 90’s indie wonders Gene, with the help of friends and accomplices has brought together the likes of; compere for the night 6’s Music’s Chris Hawkins plus Dodgy, Andy Bell (Ride), James Acaster, Angelos Epithemiou, Michael Legger, Sleeper, Starsailor and many many more acts are all committed in helping raise much needed funds for a very worthy and much needed cause in the present day climate, for an event like no other. Gigslutz caught up with Martin as we discuss how the event has taken shape plus the prospect of him snogging someone on stage on the night:

Hi Martin, how are you doing?

I’m sat on my sofa not watching Arsenal v Liverpool answering your questions because for the first time in my life something is more important than football.

We’re here to talk about the fast-approaching Ukraine benefit that you’ve helped put organise. Can you run through how this event came to fruition?

Two weeks ago, I was chatting on the phone with my sister – both of us feeling useless watching the horror unfold. After the call I thought ‘well the only thing I can do is sing’. I called my friend Rob from Starshaped promotions and said ‘let’s put on a gig to raise some money’. He took twelve seconds to be persuaded.

How has the night been planned? You have a mixture of comedians and musicians taking part.

Initially it was going to be just music. Everyone we contacted wanted to help, some couldn’t due to prior commitments but the willingness of the music community to put their time and energy into raising money was truly inspiring. I also contacted my friend, comedian Michael Legge, who was the proverbial dog with a bone and booked the most incredible line up of comics. Essentially, we have A Night at the Apollo on steroids.

Did you have to contact the acts directly or have all who are involved approached you directly?

I approached people I’ve met over the years but so many people have contacted people they know also. Special mention should go to podcaster Stu Whiffen who dug into his little book of contacts and helped hugely. Without Stu, we’d have no Andy Bell (Oasis/Ride) and Billy from The Subways.

How much donations are you hoping to raise on the night?

If the show sells out, we should raise well above 50k.

How will the money raised on the evening go to used for the people of the Ukraine?

All profits are going to the DEC humanitarian appeal.

Are there expected to be any further acts or unannounced surprises added to the evening?

There are a couple of surprises. It’s really important that there are Ukrainian voices at the show. I’ve been in contact with Okean Elzy (the biggest band in Ukraine) who are doing something special for the night. We also have involvement from the London Ukrainian community.

If the evening sells out, you have said you are going to snog Michael Legge on stage when Dodgy are playing their set. Are you going to stick to your word?

I’m slightly worried it might put people off but of course, he’s an excellent kisser.

Finally, are you hoping to see the war and senseless violence in Ukraine stop soon?

I don’t know how to answer this other than of course.

Tickets for the event can be purchased via the following link 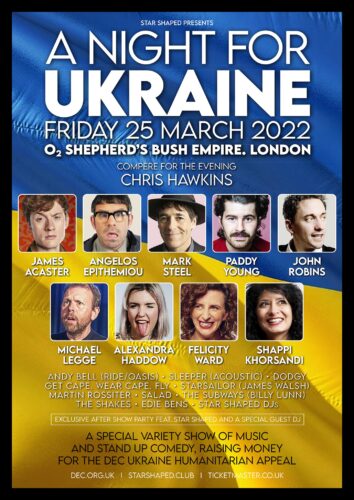 This Feeling Track of the Day: Red Telephone ‘I’m Broken’

Gigslutz Track of the Week – ‘Roman Roads’ by Prince Bishop