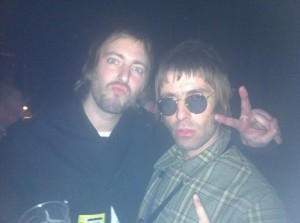 I was never meant to be going to this gig. After a spot of lunch I headed to a brief meeting over a cup of tea in a London Bridge pub. Tea was on the menu as I was bearing a heavy head and a few too many bruises from a hectic weekend watching FA cup football and general debauchery. The thing is when you’re sat outside your tea goes cold too quick. The other thing with tea is, is just feels wrong drinking it in a pub beer garden on a sunny afternoon with tunes playing. So as the meeting came to an end it was time to stop being sensible and get to the bar. Mine’s a pint. As I return from the bar I meet one of the RoxOff TV crew who informs me he has blagged a freebie for the Weller gig up in Camden. Weller is doing a 5 night stand at the Roundhouse to promote his new album Sonic Kicks. As the Kronenburg is now starting to flow and thus numbing the pain of my bruised body I decide I’ll head up there for a couple more before he goes in….

We get to the Lock Tavern and head straight out the back, again to the beer garden. The place is packed with young ‘uns and I wonder how all these people get to sit in a beer garden in Camden on a Monday afternoon drinking at £4 a pint and scoffing their faces with Bodean’s BBQ. Where does their cash come from? Anyway that doesn’t bother me for long as Stefan has turned up. Stefan is managing Steve Craddock in Germany (Weller’s guitarist and OCS stalwart) and is thus here with him. He is also a photographer extraordinaire. Check out his work at www.stefanduerr.com….. After Dave blaggs a free round of beer Stefan declares he’s been to last nights gig and he’s not that bothered about going in tonight so I can have his VIP pass. Sound! Nice swan Stefan. I’m in.

So it’s me and Dave, VIP passes and we’re already half cut. I’m sure I could hear my bruised body give out a sigh as there is no way this was going to end up with us on the last tube home. It certainly wasn’t when we were ushered through the VIP curtain to a private bar to be ambushed by Liam Gallagher who decided he was watching the gig with us, and that apparently he had the best fooking socks in this gaff. They were canny socks mind, I must say.

As me Dave and Liam stand side by side in the dark corner of the VIP bar the ‘modfather’ himself bowls on. Dressed in an impeccable suit (his own pretty green design if I’m not mistaken), he plays the whole of his new album in the first part of his set. This was risky considering the album has only been released today and the day trippers looking for a greatest hits set would be disappointed. He can do what he wants at the end of the day though; he’s Paul Weller isn’t he. I’m lead to believe from other reviews that a lot of people were not impressed with this. I found the new stuff good though especially the psychedelic ‘green’ and ‘When your garden’s overgrown’. There was also a bit of a Weller first when he played Study In Blue, six minutes of dub reggae performed as a duet with his wife Hannah Weller. As the gig went on and Weller changed between organ, acoustic and different electric guitar for every song, we were also joined by the bladdered Gail Porter and Miles Kane, who was due to be doing a couple of numbers later in the set.

As the new stuff went on Liam looked a bit unimpressed “not having that, got no fucking balls, man” he quoted during one slower new number. Liam went on to declare to me that he has written a song called ‘after the break’ which is better than the Beatles and the Roses and it will “blow my fucking mind”. My response: ‘Better than the Roses? Fuck off’. Ah well, say what you think and that. As Weller’s new stuff finishes he comes back on for a mini acoustic set which included a mass sing along so English Rose. Following this there was a short electric greatest hits set with the crowd pogoing to ‘Floorboards’ and a rousing end of the set ‘Town Called Malice’. There is no encore so me and my new mates march to the back stage area. Nothing happening there so we all head over the road to continue drinking. The bar over the road is Empty so our little gang gathers by the back bar. As me, Dave, Liam, Gail and Miles discuss music, football and complete nonsense and the hours tick away, I recall to myself of the time when I left the house with the intention of having a bite to eat and a quick meeting. 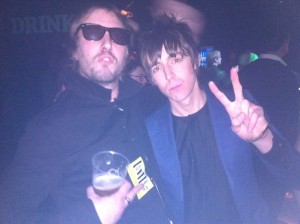