It's now less than a week away until the south coasts most uptown small time forest shindig Festibelly opens its tangled vines once more to bring in a new crowd after a well deserved break. And if you're wondering what's on offer, there's old favourites as well as new blood flocking into the festival. Get prepared for Festibelly by doing your homework early and reading up on the ones to watch on your mini weekender, with (lucky number) 7 artists to look out for on your forest getaway.

Festibelly wouldn’t be the same without country sirens Skinny Lister, who never fail to attract a lively crowd. Live folk patriotic celebration ‘If The Gaff Don’t Let Us Down’ was a sight to see a few years back when groups huddled together jumping and kicking legs in and out, while a flagon of rum was passed around originating from the band themselves. And if you prefer your folk quieter and brooding you have the equally enchanting ‘Plough and Orion’ led by delicately plucked guitar strings and the sweet chorus of “it’s on you, I rely on”. With all this and ‘Rollin Over’ on their backs, which stands as a typically English stomp with duly tapped drums, jolly accordion harmonies, and the type of hills and valleys imagery which suits Festibelly perfectly.

For a band whose name is “my God” in Spanish, Dios Mio do not fail to deliver the drama. While ‘Proto’ stands as a swirling beach rock number that dances in it’s despair as much as it drowns in it, ‘Stories’ stirs up a concoction of broodingly plucked guitars and darkened drum taps that more than meet the expectation placed by the bands name. As a new face at Festibelly, it’ll be interesting to see Dios Mios play in a more natural stage with dark forest surrounding – after all, it’s the kind of doomed beauty their songs bring to mind.

Having formed in 2007, Reggae Roast have their own record label, have performed at Festibelly, Bestival, and Boomtown, and have took charge of managing acts on large stages at Glastonbury. With all this under their belts, in 7 years you probably won’t be surprised to hear that these reggae front runners are going to be back this year. You will be hearing mixes with dreamy dub ska vibes and funky bass breakdowns from these guys. At the same time, it isn’t a set you’ll want to miss, expect the unexpected.

Another newbie to Festibelly, Femme may be coming for the first time but she’s not shy. If you take “Fever Boy” you’ve got one hell of a slice of sweet pop perfection. And if Katy Perry sports cupcakes in her look, the dessert to Femmes sound is Eton mess. Not only this, but along with “Heartbeat” with it’s bass slaps, drum thuds, and offbeat bleeps mixed with a made-to-singalong chorus of “I’m no heartbeat” which provides a sharper edge to the sweetness of “Fever Boy”. Maybe even expect some retro covers, as the singers recent covers include ‘R.E.S.P.E.C.T’ by Aretha Franklin and “Ring My Bell” by Anita Ward – watch this space.

A power pop coupling not to be messed with, these guys are rightfully placed as Saturdays headliners. Evidence comes in the form of acoustic stormer “Battles” the bands new single, which they will more than likely grace us with when they hit the stage. And if you want to slow down a bit, we have the jolly strumalong number “Weapons” which stands as a statement to “put down your weapons” and to stop fighting. And in this one song you think that those weapon holders may actually be charmed enough to lay them down, as Hudson Taylor hold the idyll in their songs that the New Forest enchants you with, making them more than a match for this years Festibelly.

When I saw this name on the line up I really got excited. Since 2001 Late Night Tales DJ’s are the ones behind the big Late Night Tales mix albums where artists like Jamiroquai, Fatboy Slim, and Friendly Fires have been asked to bring in their share of artists for their late night mix. As of 2012 they have released 30 of the compilation albums, each including a story track read by performers like Benedict Cumberbatch and Patrick Moore. While a guest appearance may not be realistic, if you’re looking for a midnight set that’ll groove you through the night, turn to Late Night Tales DJ’s in the Disco Tent on Friday.

Keep an eye out on Friday for Amber Run, these are rockers with morose melodies. ‘Heaven’ is proof of this with it’s darting back and forth background synths and cold killer riff led by a sweet honey vocal. Stepping it up a notch, we have a catchy as hell chorus of “let the light in” in ‘Spark’ with it’s Killers lite riffs it rings out like their own ‘All These Things That I’ve Done’. Amber Run are bound to command attention to the stage Saturday, and from what I’ve heard so far I wouldn’t be surprised if they were another Bastille success story. 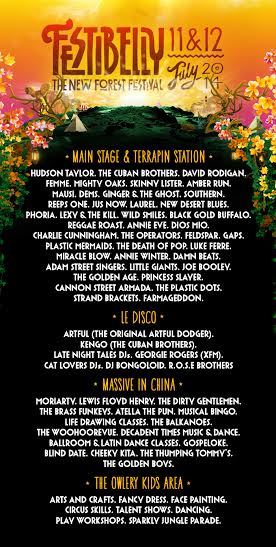 I'm Oliver and I am currently based in Bristol. I prefer the rock genre, but I like writing about other genres like blues, jazz, reggae, pop, R&B, and hip-hop as well. Live for anything by the Yeah Yeah Yeahs, Metronomy, and Pulled Apart By Horses. Future UWE Bristol Journalism Graduate. If you wish to get in touch please email - oliverevans95@gmail.co.uk

I'm Oliver and I am currently based in Bristol. I prefer the rock genre, but I like writing about other genres like blues, jazz, reggae, pop, R&B, and hip-hop as well. Live for anything by the Yeah Yeah Yeahs, Metronomy, and Pulled Apart By Horses. Future UWE Bristol Journalism Graduate. If you wish to get in touch please email - oliverevans95@gmail.co.uk
View all posts by Oliver Evans →