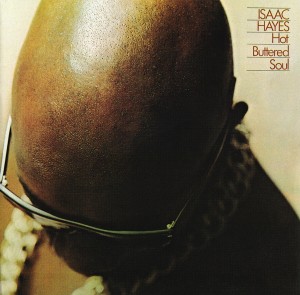 Forget about Shaft. Ignore his turn as Chef in South Park. And let’s skip over all of that Scientology bollocks. What Isaac Hayes really ought to be remembered for is his second LP – Hot Buttered Soul. It’s a masterpiece that deserves to be as revered as classic soul albums like Sly and the Family Stone’s Stand!, Marvin Gaye’s What’s Going On and Stevie Wonder’s Innervisions. Four songs, spread over 45 minutes, this record oozes soul, bleeds funk and still sounds fresh 45 years after it was first released.

The first time I came across the iconic sleeve – a bird’s eye view of Hayes’ signature bald head – I was in an op shop (op being short for ‘opportunity’, which sounds more sophisticated than charity shop) in Melbourne in 2001. I paid the princely sum of two Aussie dollars for it on vinyl – 13 years later and I’m still hearing something different each time I listen to it.

Released on the legendary Stax Records label, it’s fortunate that the album was even made. Poor sales of Hayes’ first LP, Presenting Isaac Hayes, had convinced him that his future was in producing and songwriting for other artists. But after Stax lost its entire back catalogue following the split from Atlantic Records in 1968, co-owner Al Bell devised a plan that would see the release of 27 albums and 30 singles simultaneously to ensure the label kept its strong reputation within the music industry. When Bell approached Hayes and encouraged him to record a follow-up to his debut, the singer was resistant at first, but eventually accepted on the condition that he be given complete creative control.

The album was recorded at Ardent Studios in Memphis with renowned backing group The Bar-Kays and produced by Al Bell, Allen Jones and Marvell Thomas (who also played keys on some of the tracks). Eschewing the three-minute pop song format, Hayes set out to make an expansive record that would challenge the notion of what soul music could be:

“I did what I wanted to. I just heard those strings, and I expressed myself through those. And I heard the horns. I kept the funky rhythms underneath, but I put the strings on top and made them speak. With authority. And I did it long because I felt what I had to say could not have been said in two minutes and 30 seconds. I took some liberties. It was kind of selfish on my part.”

The album opens with a cover of the David Bacharach and Hal David classic, ‘Walk On By’. Clocking in at 12 minutes, Hayes’ version begins with an instrumental passage: lush strings and horns float over James Alexander and Willie Hall’s tight bass and drums, before an Ike-esque fuzz guitar solo from Michael Toles rips through the groove. After two minutes the vocal drops in casually, as a deep baritone delivers the familiar opening line, “If you see me walking down the street…” Hayes is accompanied by female backing singers in the build up to the chorus, but just as you think the song is going to take-off, the song slips into reflective mode, before building back up with the swell of organ, strings and horns. The climax of the song is mesmerising, as the guitar duels with Hammond organ over a cavalcade of strings and brass.

Incidentally, hip hop fans will no doubt recognise ‘Walk On By’, which has been sampled by numerous artists, including Biggie Smalls on ‘Warning’, 2Pac’s ‘Me Against the World’ and the Wu-Tang Clan for ‘I Can’t Go To Sleep’ (Hayes himself also sings on the chorus).

‘Hyperbolicsyllabicsesquedalymistic’ was co-written with Al Bell and is the sole Hayes-penned composition on the album. As funky as ‘Walk On By’ is epic, it’s the most experimental song on the record and defies classification by fusing genres to create a sound somewhere between Sly Stone and Can. Most of the song consists of a bass, drums and piano groove (plus the occasional grunt from Hayes) and it sounds immense. Again, hip hop aficionados will recall the break, which was sampled by DJ Quik on ‘Born and Raised in Compton’ and Public Enemy for ‘Black Steel in the Hour of Chaos’.

The third and penultimate song is the closest thing to a conventional soul tune on the record. ‘One Woman’ sees Hayes declare his conflicted emotions over an affair, and while it’s the least experimental track on the album, the traditional arrangement gives us a brilliant understated chorus: “One woman is making my home/While the other woman making me do wrong/ I didn’t intend to let this pain get that strong/Now I gotta decide where I belong.”

Hayes’ 18 minute re-invention of the Jimmy Webb classic ‘By the Time I Get to Phoenix’ doesn’t waste a single moment and more than justifies its extended length. It begins with a subdued spoken word introduction that lasts for eight minutes, where accompanied by nothing more than a cymbal and the low drone of an organ, Hayes explores the backstory behind the characters in Webb’s song, imagining their motivations and framing the narrative before what Frank Sinatra called “the greatest torch song ever written”:

This young man was raised in the hills of Tennessee
When he reached the age of maturity, he moved to the West Coast
And he fell in love when he got out there to this young girl
Aw, man, she was out of sight. She was bad

Epic, magnificent and hugely ambitious for its time, Hot Buttered Soul challenged notions of what soul music was and arguably invented the ‘loverman’ persona adopted by Barry White and Marvin Gaye in the seventies. It remains one of the all-time great records across all genres. If you’ve never heard it, you’re in for a treat.