We all have that one record that we come to later in life, stopping us dead in our tracks, making you question everything you thought about music up until that point. For Gigslutz contributor and all round girl wonder, Kate Crudgington, it was the infamous 1985 release from Kate Bush – ‘Hounds Of Love’. Drunkenly picking up a friends vinyl copy only a year ago, Kate talks us through how the whimsical feminine tones of Bush made her want to do more than just dance.

It pains me to admit I only discovered the eternal charm of Kate Bush a year ago. I was carefully flicking through a friend’s vinyl collection when I came across a copy of Hounds of Love, and I asked him to play it. As Kate’s voice began winding it’s way out of the vinyl’s grooves; my love for her sound was immediate and intense. I was fascinated by the pain, primal desire, and supernatural power behind her music. Admittedly, It was 4am and I was half-cut on vodka; but I took strange comfort in Bush’s astonishing confessions of strength and weakness. I knew Hounds Of Love was going to be a record I returned to for the rest of my listening life. 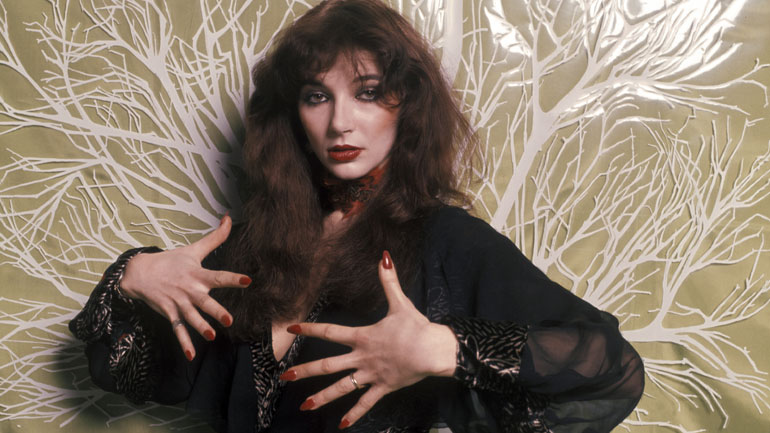 As a child, I was always outside – in the garden, the forest, the fields – running wild with my sisters and my brother. I felt like a feral girl internally, despite displaying the well disciplined behaviour of a Victorian school child in most social situations. This instinct to run has continued to keep my heart beating well in to my twenties, so when I heard Hounds Of Love’s opening track ‘Running Up That Hill’ – I felt my feral and formal behaviours click together. Finally, here was a woman who was both ethereally graceful and wildly reckless. A woman who knew the necessity of the exaggerated heart beat, but who was acutely aware of the societal boundaries which repressed it. I was hooked. I was familiar with the lyrics to ‘Running Up That Hill’ because I’d played Placebo’s cover to death. “So much hate for the ones we love” stood out immediately; the contradictions somehow making perfect sense to me.

Kate Bush-Running Up That Hill

Second and eponymous track ‘Hounds Of Love’ ingnites my ever present desire to tear through the woods like a child again. A mischievous grin spreads across my face when I sing “Take my shoes off and throw them in the lake” at the mirror, whilst Kate sings about tending to hurt animals, and walking on water. Her insight in the lyric: “I’ve always been a coward, and I don’t know what’s good for me” eases my guilt during the aftermath of a particularly damaging romantic decision.

Academically, I’ve generally exceeded expectations; but being smart on paper does not guarantee immunity from stupid decisions in real life. Fortunately, songs like ‘The Big Sky’ are always on hand to remind me not to waste too much time dealing with guilt and shame. “You never understood me, you never really tried” Kate sings, over electric guitar and rolling drums; the musical equivalent of closure. One of my favourite things to do on a stale winters evening is throw on some running gear and tread my usual circuit listening to this. As I stare up at the stars in the velvety black night, ‘The Big Sky’ is a reminder that life goes on, regardless of loss and fear (FYI – it’s also an excellent beat to pace yourself to whilst exercising).

Fourth track ‘Mother Stands For Comfort’ acknowledges the maternal sixth sense which ‘good’ girls have to accommodate in order to keep their Mothers as allies. The sound effect of smashing glass accompanies the opening line “She knows that I’ve been doing something wrong…” both of which make my eyes widen with fear. Kate manages to encapsulate the ‘look’ Mothers give their daughters when they return home from an ‘encounter’ – a gaze which burns with a mix of suspicion, compassion, pride, and genuine relief. Bush reminds me to appreciate my Mother’s patience when I find myself in these situations, and not to mistake her concern for interference (sorry Mum x).

Moving on to fifth song ‘Cloudbusting’, whose political undertones completely eluded me before I started writing this piece. The song is written from the point of view of Peter Reich – son of accomplished Austrian psychiatrist Wilhelm Reich – and alludes to his Father’s incarceration by the FBI in 1941. One of Wilhelm Reich’s theories – “muscular armour” – is based on the idea that personality can be expressed in the way the body physically moves. This theory is Kate Bush incarnate, and a fascinating way of interpreting the choreography in her music videos. As someone who relies on unconventional personal choreography to cut loose at the end of a stressful week, I love watching Kate move so idiosyncratically without hesitation or embarrassment. I try to emulate her whenever I’m on a dance floor (usually under vodka’s influence, and usually unsuccessfully).

Moving from political references to the literary; Hounds Of Love’s sixth track ‘And Dream Of Sheep’ marks the opening of The Ninth Wave part of the album. This is an allusion to nineteenth-century Poet Laureate Alfred Tennyson, and his poem The Coming Of Arthur (which is quoted on the back of the album). I’d studied Tennyson’s Charge of the Light Brigade and The Lady Of Shalott as an English Literature student; so I applauded this reference. On a tearful, restless night, ‘And Dream Of Sheep’ is the perfect lullaby. When Bush sings about wanting her radio so she can “tune in to some friendly voices, talking ’bout stupid things” my heart leaps in agreement. Music, and conversations about music fuel my existence – they ease my anxiety when “I can’t be left to imagination”. The way Bush articulates this is intense, poignant, and comforting.

Two of my favourite tracks sit next to each other on Hounds Of Love: ‘Under Ice’ and ‘Waking The Witch’. I like the menacing, threatening sound of the strings on the first track, and the melancholy grand piano on the second. Both tracks are about breaking through, resisting, surviving; which is why they’re so easy to return to. The intro to ‘Waking the Witch’ makes me want to cry like a nine-year old daydreamer who’s fallen and scraped her knees in the playground. The blend of encouraging, yet cautious voices urging you to “Wake up child!” capture the uneasy state between dreaming and waking perfectly. The track then drops in to a series of demonic, distorted call and response vocals, synth sequences, and samples Pink Floyd’s helicopter effect on ‘The Wall’.

There is only one song on Hounds Of Love I usually have to skip, but it’s not because it’s unworthy or inferior; it simply pulls too hard on my heart strings. In the days of social media, ‘Watching You Without Me’ is an easy thing to accomplish, even if you’re not actively searching for evidence that your former flame has lit someone else’s world on fire. Bush reveals my ultimate romantic fear: “You didn’t hear me come in, you won’t hear me leaving”. Being left behind or forgotten is always a kick in the teeth, so I don’t hesitate to skip when this track starts to play. Fortunately, ‘Jig of Life’ supersedes this sad song, and as the name suggests, it will make you Irish dance until your toes fall off. I always imagine Jack & Rose dancing below decks with the common folk in Titanic to this one.

Changing the pace is the politely named ‘Hello Earth’, which is one of my favourite conceptual space songs (after Bowie’s ‘Life On Mars’). Beneath the vastness of the sky, watching a storm brew; Bush sings her greetings so sweetly as the choir warn “get out of the waves, get out of the water”. As with ‘And Dream Of Sleep’, this is another mellifluous lullaby for a restless night. Ultimately all good things must come to an end; and ‘The Morning Fog’ is Hounds Of Love’s closing statement. It’s an optimistic mind-clearer, and the regenerative qualities of this aural fog usually have me “falling like a stone” in to the crisp, cold waters of new perspective.

After reading this, I imagine you think I’m some barmy, over-sentimental girl who can’t function without musical reassurance – and you might be right. But Hounds Of Love taught me there are some records which do not age in their intentions, adorations, or their beauty. Kate Bush knows the struggle; but she bangs a bloody drum and dances to her own bloody beat, because that’s all a girl can bloody do!