Citadel Festival took place in Gunnersbury Park, only a short walk from Acton Town station. Music lovers poured into the site, ready for the family-friendly festival that included a kid’s area, yoga, a live stream of the cricket world cup and of course three stages (and a DJ stage), ready for some incredible artists.

Brighton band Squid was one of the first bands to play on the DIY Stage (which unhelpfully was labelled the Big Top on the outside). This band boasted a unique set up from the off-peak with the drummer taking lead vocals, the drum kit set up centre stage. The music was a standout sound featuring warped guitars, synths and even a cowbell that somehow complemented the heavy vocals and heavy beat that echoed around the tent. 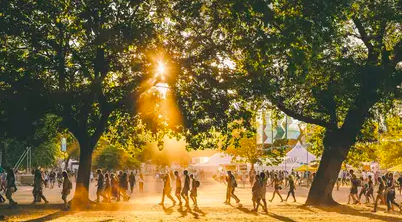 The DIY tent also saw the likes of The Murder Capital and Fontaines DC take to the stage, both very similar bands in terms of music and also style. With each band, the lead singer walked on stage holding a cigarette (to show they’re ‘bad boys’ we assume?), before launching into a deadpan performance, showing little emotion while repeating the same lyric over and over to a beat that got heavier and heavier and faster and faster. Maybe the two bands wouldn’t have seemed so similar if they hadn’t been playing the same stage and so close to each other but the similarities were hard to miss.

However, there is no denying that for both bands the crowds were going wild, mosh pits taking over the tent, something that was especially prominent during Fontaines DC’s set, the audience absolutely loved them.

Over on the main stage played Dream Wife, DMA’s and Bastille, each leaving their own mark on the festival, playing to huge crowds, keeping up the good morale that could be felt throughout the day.

Singing, songwriter, Jade Bird was a late addition to the lineup, replacing Matt Corby. Her addition to the line up was a very exciting one due to her extensive fan base and also helped to slightly balance out the very male-heavy line up of the day. Dressed all in white with a white acoustic guitar, her powerful voice and charismatic personality beamed down from the stage, everyone genuinely enjoying her set. Throwing in a jazzy cover of “Walk Like An Egyptian” along with her hit track, “Lottery”, Jade owned the stage, gaining new fans left, right and centre.

A day of summery weather and sing-along tunes, Bear’s Den was a perfect fit, their tent filled to the brim and spilling over with fans who danced around the outside, singing their hearts out to their favourite songs. They played a lovely and warm, folk-esc set, and didn’t even need to introduce “Above The Clouds Of Pompeii”, fans picking up the track from the guitar opening, cheering in admiration.

Catfish and the Bottlemen were the headliners for the day, with an 8:30 pm start, the sun was setting and the moon was rising creating a picturesque look for their performance, carrying on the feel-good atmosphere that had encapsulated the entire festival. They played a mix of songs, definitely focusing on their older albums, but also treating fans to some newer hits like Longshot and 2All. Towards the end of the set, Van Mccan stepped away from the microphone, as fans sang the chorus to Cocoon, their voices loud and word for word perfect to the song, creating a pretty poignant moment of the day.

As darkness fell, the festival came to a close, everyone leaving with smiles on their faces, Citadel was done for another year.