The first instalment of our 2018 Creamfields weekender review.  Featuring Chase and Status, Chainsmokers and Sigma.

Setting off a storm at Creamfields ‘Sickboy Stage’, were British Drum n Bass DJ’s, Sigma.  A ray of psychedelic lights glitched onto the stage as the duo proceeded to play a mixture of funk with a bluster of house music.

Highlights of the duo’s set included a remix of, ‘How Deep is Your Love,’ by Calvin Harris, which was followed by a speech where Sigma said: “I’ve said it before and I’ll say it again, it’s a pleasure to be here right now.”, before mixing alarming noises and piercing drops into ‘Need Somebody To Love’ by Avicii. A mixture of responses was carried by the audience, as everyone swayed and bobbed; most were in tears as Sigma boomed their tribute to the late EDM DJ.

Shaping a different tone was West London’s Kurupt FM. Bouncing in with a harsh backdrop of red shapes, the collective started their set with a remix of Luniz’s, ‘I got 5 on It.’ Kurupt FM pronounced their dominance on stage with a bunch of hectic animation as well as killer energy and a beam of classic remixes. 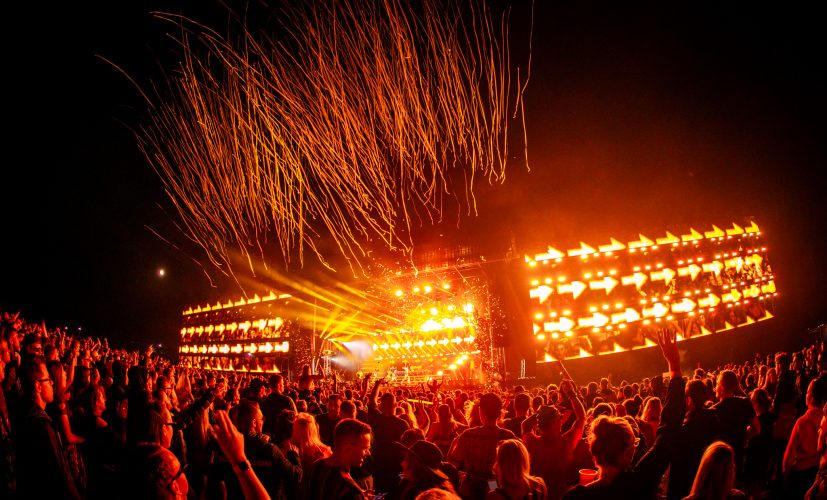 Introduced by Kurupt FM following their set, Matrix and Futurebound wowed with an array of hard-hitting basslines littered with a mesh of distorted sounds. Whilst build-up to most remixes bounced together with a mixture of off-kilter sounds, most drops were left rather anticlimactic. With a positive atmosphere and chanting and raving teens, Matrix and Futurebound had secured themselves with a pretty happy crowd. Whilst the tent appeared to have a profound amount of space it was clear that space was soon to be intruded by mosh pits at the point of each ill-satisfactory drop.

Where Matrix and Futurebound failed, however, commercial house-pop duo, The Chainsmokers, succeeded.  Their Friday night set was a great mix of heavy bass driven drops and piercing techno sounds. Their set was all about the stage performance; firecrackers were shot from the stage and vibrant looping shapes were projected as holograms against the speakers.

Being such an acclaimed DJ group, the American producers weren’t here to mess about. Their hypnotic modern-dance drops gave hints of early Rudimental. Remixing Cardi B’s acclaimed hip-hop track, ‘Bodack Yellow,’ the Creamfields crowd were like a group of wild animals as they flung their bodies alongside the chop and screwed remix.

Following some eclectic choices,  The Chainsmokers also thrashed in some of their best including, ‘Paris,’ and ‘Roses.’ Bursts of flame shot into the air for, ‘Paris,’, which was gradually mixed into the throwback anthem, ‘Everytime We Touch’ by Cascada.  A clever touch, but a generic one. There is only so much authenticity you can expect from DJ’s that dabble in the music industry.

By the end of there was a striking mix of reggae productions, creating for a playful carnival vibe.  Cemented as one of the festivals biggest featured acts, it’s fair to recognise The Chainsmokers had thought out every single drop and stage production.

Finalising the first day at Creamfields Festival was a Chase and Status DJ set at the SUB_AURAL tent.  Boasting classic remixes, Chase and Status spun their audience with a bit of their DJ magic, mixing and blending Shy FX’s, ‘Original Nuttah,’ with their own acclaimed drum and bass anthem, ‘No Problem.’

Setting a strong performance from the point they walked on, Chase and Status threw in some of the meanest jungle mixes, alongside their 2011 classic, ‘Blind Faith.’ Ending their triumphant set with Red Hot Chili Peppers, ‘Give it Away,’ spun into Beanie Man’s, ‘Who Am I,’ the British-born DJ’s sent the stage spinning in gasps of disbelief as their crowd threw themselves about.