Liverpool’s Sound City Festival has become an annual gem within the city and its music. Attracting many from outside the area as well as locals, the festival saw an immensely successful first year at its new site on the Bramley-Moore Docks last year. With much to live up to, it would be interesting to see how the festival coped this year with some minor changes as well as the decision to only have it as a two day event rather than three.

Musically, the weekend began for me at 2:30pm on the Saturday afternoon, and that was in the hands of Judas. Thankfully I can safely say the beginning of the festival this year sat comfortably in safe hands. Within minutes it is evidently clear that Judas are more than capable of making it into the big leagues with a little perseverance; the songs are all there, the image matches them well, the choruses are quite frankly huge, and the smiles are spread across their faces. The band triumphed as they undoubtedly made many new fans during the slot, leaving people nodding their head in satisfactory improvement. One thing’s for certain, you’ll be hearing much more from Judas in due time.

Straight from the North Stage to the Main Stage, the crowds were graced with another exciting band that are heading in the right direction. Newly signed earlier in the day to Warner Records Sugarmen whipped the crowds into shape with their snappy, atmospheric grooves. Although there was perhaps a gap in the bands that I was initially interested in seeing, it’s nice to know there’s plenty more on offer. Sitting in Tim Peaks Diner proved to be an enjoyable alternative, the atmosphere is welcoming and the ‘In conversation with..’ features are a nice touch, listening to the likes of Paddy Considine and Sleaford Mods talk to members of the audience before their slots adds a bit of variety to the typical festival experience.

As the evening took shape and the sun set over the Mersey, creating a musky amber highlight for the festival, Band Of Skulls undoubtedly stole the show. The gritty fuzz was exactly what was needed as the day started to become long and legs started to ache, the harmonies lifted people through the struggle and spirits were incredibly high. The band ploughed through the perfect mix of tracks featuring on the new album as well as old fan favourites, which included the likes of ‘Death By Diamond And Pearls’, ‘I Know What I Am’, ‘Hoochie Coochie’, ‘Brothers And Sisters’ and a blistering finale in the ever immense ‘Asleep At The Wheel’.

Catfish And The Bottlemen got the swerve as although they may have a new album out that is only a few days old, I feel as though I’ve seen everything they’ve got to offer, especially from the singles that were released prior to the release date. With that being said, the amount of Catfish t-shirts that were present on the docklands ultimately proved this to be a good booking in terms of the festival and pulling in a crowd.

The North Stage was graced with Young Fathers as its Saturday headliner, which pulled in an impressive crowd considering how many people were over at the Main Stage. Young Fathers were flawless and they were impressive even to someone who has never listened to any of their music before. The most vital thing that made their performance a pleasing one was undoubtedly the sheer amount of energy that was released by each member of the band. Young Fathers can not be knocked for their effort. 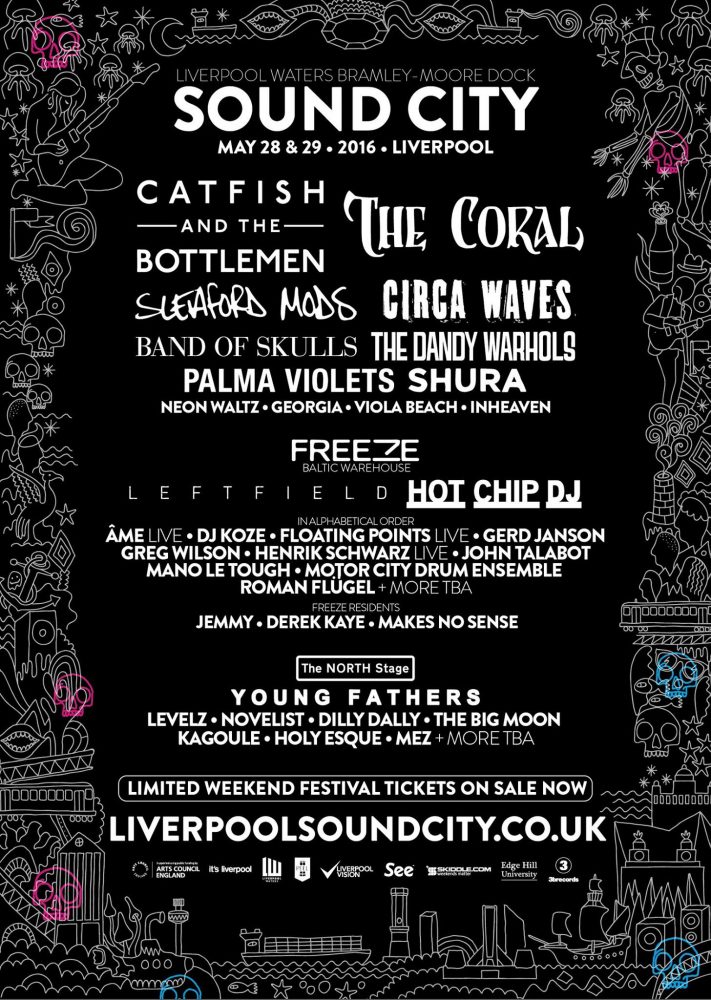 Perhaps one of the greatest offering of this year’s festival was the Cavern Stage, many interesting and exciting bands could be found across the stage throughout the weekend. The stage offered another great alternative to those who were unsure on where to go or who to see. Highlights from the stage came from the likes of Pink Kink with their feisty vocals yet all-round feel good tunes, strangely enough reminding me of bands such as Fidlar and so forth. Youth Hostel are also deserving of a mention. Having being told that this performance was taking place still very early days for the bands evolvement, excitement was ripe within the band with maybe a hint of nervousness in there too. Saying this, they pulled together and had an extremely song set, which left the crowd singing along with gracious appreciation.

Technical issues became dominant when it came to Circa Waves’ slot on the Main Stage, which led to a crowd-pleasing set ending abruptly. The band remained in high spirits however and eventually returned to the stage with a well-executed cover of the Beatles’ ‘Revolution’ as well as fan-favourite ‘T-Shirt Weather’.

The time soon came to get excited by the name that the majority had been saying all weekend, none other than Pete Doherty. Even just a few hours before his slot, people are sceptical. At 11pm an energetic Libertine hits the stage, with the crowd roaring in awe. Pete runs through solo tracks with precision and executes Libertines tracks sublimely, with ‘You’re My Waterloo’ acting as a highlight. As ‘Fuck Forever’ ends, the crowd are in complete frenzy, left in a true sense of appreciation towards one of our generations unique icons.