Whilst the early 90’s reverberated to the sounds of baggy indie bands such as The Stone Roses, Happy Mondays and Inspiral Carpets lesser-known sophisticated musical nuggets were being discovered by the few with an ear towards something that wasn’t as easily accessible; I’m talking about The High, New Fast Automatic Daffodils and World Of Twist. The latter were, in my eye, a little more strange than other bands. I was an early 90’s Madchester lunatic. Typical basin haircut, 28’’ Joe Bloggs flares and oversized Fruit Of The Loom t shirts were my traditional attire back then. World Of Twist were streets ahead of me and it’s only recently that I’ve appreciated their distinct wonderment.

This might be a similar story with other Madchester followers but make no doubt about it World Of Twist more than deserve their time in the spotlight. Their compositions are the stuff of glittering class, the sort of material when discovered shatters your content musical hub with the staggeringly glorious singles Sons Of The Stage, Sweets, The Storm plus stellar album highlights Jellybaby, The Lights plus their raw cover of Kick Out The Jams. Whilst their material might be a staple diet of fans of the band, here’s hoping those reading this article will venture into the bands catalogue, however, what will no doubt be only familiar to some is the inside story of the band. 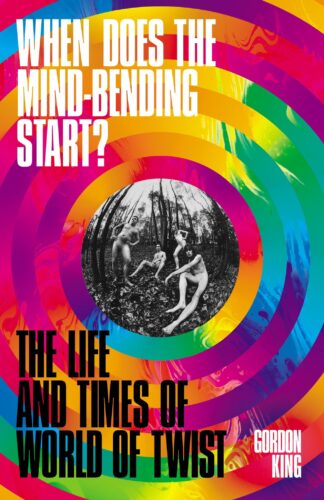 When Does The Mind Bending Start?: The Life and Times of World of Twist released via Nine Eight Book 21st July 2022, is the long awaited inside glimpse into the band by their guitarist Gordon King. King is the long haired tall ghost life figure, mix mid 70’s Francis Rossi and Tony lommi! (clean shaven) and you’re just about there in describing his looks. His penning of a outstanding tune is also up there with the likes of Rossi and lommi, whilst the book is steeped in a openminded candidness, nothing too aghast is evident rather a lamenting catalogue of what could have beens.

A fairly subtle and loving upbringing was interrupted by discovering a certain type of music and then the growing of hair ensued, sound familiar? However, any familiarity to King’s upbringing is differentiated by the makings of World Of Twist who hit the big time around the time he hit 30. We get the low down on Kings formative years, some enchanting moments with this parents who were particularly supportive of young King, he was there at some of the gigs in the mid 70’s / early 80’s that would make the list of concerts many would’ve liked to have attended. Whilst his time in World Of Twist was full of excitement, highs and lows, the continuing story is surrounded in the self doubts of King.

These lamenting’s will be a relief to some who also suffer with nerves amid a desire to perform. King comes across as sincere in his desire to shake his fears but to disguise it there are various substances that are taken along the way, some appear to help the situation, some not so much, as par for the course. The book is as fascinating as the title might suggest, with a touch of the intriguing as King describes his relationship with lead singer Tony Ogden plus the other Twist members along with drummer Nick Sanderson, both sadly no longer with us. Taking everything into account, the book is an under, over, sideways, down tale which leaves the reader with answers to many questions as to why World Of Twist didn’t break the world and become one of the all time great bands, but maybe World Of Twist belong to the privileged few. Sons Of the Stage? More like Kings Of The Stage!

When Does The Mind Bending Start?: The Life and Times of World of Twist can be pre-ordered via the following link

This Feeling Track of the Day: The Chase ‘I’m The Man’