As someone who long abandoned Radio 1 in favour of the 5 and 6 variety my knowledge of pop music is probably what you would class as “dad-esq”. Yet whenever I hear a pop song on the radio which I find catchy inevitably it ends up being Rihanna. Delving a little deeper it seems it’s impossible to understate just how big our RiRi (as I’ve heard her called) is. Already with 6 UK number ones under her belt along with 100 million downloads she is the opitomy of 21st century pop star. With this is mind I trundled along to the Stadium of Light to see what all the fuss was about.

Ditching the car a good few miles from the main event it was quickly decided that a few pints were a better option than going in to watch David Guetta. Apparently he is something of a legend in some circles but after walking for a good half hour I was in no mood to see some fella push play on his CD player and do Jesus Christ poses. I can do that shit at home. Sitting in the familiar surroundings of the run down pub which I frequent on a match day basis it quickly became clear that I wasn’t in for the normal evening out in bonnie Sunderland. The Half Way House boozer is a lot of things but what it certainly isn’t is a hangout for scantily dressed young girls knocking back alcopops. The locals seemed startled. The bar staff had dollar signs in their eyes.

Quickly knocking back our drinks we made our way over to the stadium to embrace the festivities. On our way a very inebriated girl stumbled passed who had managed to lose her shoes. Swearing into her phone whilst staggering into anyone passing she had clearly had her fill of the fun for the day. Entering the arena a few others perhaps should have done the same.

Now, I’m the last person to judge anyone for being over the limit as it were and a stadium gig is a good excuse as any to have an all-day piss up but what greeted me on arrival was something else. People literally couldn’t stand. Slaloming between wobbly youths I nipped to the mens only to be greeted by a gaggle of women using the facilities in their own way. I hadn’t seen that many fannies since, well, the last time I was here to watch our hapless football team (boom ti

After this we made a beeline for our seats. It was clear from the fracas that little effort had been put into organisation and a brief chat with a steward confirmed that they were very low in numbers. Being amongst the melee’ I made a mental note to myself hoping that I wouldn’t have to be writing sombre piece on a tragedy or sorts. Luckily, and I mean that in every sense of the word, I’m not. But take heed Sol gig folk, if you continue this profit over people mentality it is a matter of when as opposed to if.

Anyway, enough of my Daily Mail patter and onto the gig. From the outset one thing was very clear. Rhinna is a fuckin star. Dripping with attitude and sex appeal she commands a stage in a way very few can. For the first 3 songs I literally stood with my jar hanging below my mouth. The girl was filth. And I mean filth. How she managed to get anything down with the amount of masturbation she seemed to insinuate is a mystery and makes her achievements all the more worthwhile. I struggled to get 5 Cs at GCSE on a similar schedule. 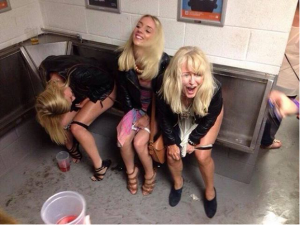 A quick costume change brought growns of disappointment (from me) as she re-appeared with white jeans on. However, she soon bent over and pointed at her bare arse to show that they had the back cut out. All was well with the world again.

A couple of costume changes later and we were onto the hits. If the opening act was foreplay then this segment was most definitely the orgasm. Song after song of ear worming pop tunes sent an already excitable crowd into raptures and sent yours truly into some serious dad dancing. Hearing them one after another made you realise why she is as big as she is. Indeed the crowd was so worked up during Umbrella that sporadic fighting broke out in numerous places. Seeing Rihanna slink across the stage whilst literally hundreds of people battered lumps out of each other all to the tune of one of the finer pop songs of recent years was definitely a unique experience. Old RiRi herself got stuck into the agro when someone threw a pair of sunglasses at her on stage. Picking them up and pitching them back where they had come from she warned the crowd not to “throw your shit onstage or else I’ll fuck off early”. Coming days after lamping a punter at Birmingham and its clear she’s not to be messed with. She probably learnt that the hard way unfortunately………

A final costume change brought about the proverbial post coital element of the evening. Dressed less like a 2 bit hooker and more like a high class one she croon through a couple of slow numbers, finishing on Diamonds. This is where I learnt that the torch app on your smartphone has replaced the traditional lighter in the air waving to accompany a slow number. I don’t know why but this saddened me a little. My thumbs seemed pleased though. Fireworks ended the show and our leading lady took her deserved bow all the while repeating the word “Sunderland” like a toddler learning to talk. 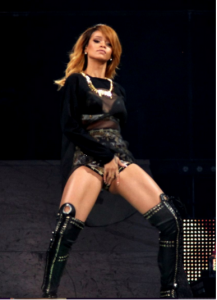 Going into the stadium I had little idea of what to expect but came away very happy at what I had witnessed. With the exception of a few costume changes and the odd pyrotechnics she hadn’t resorted to any gimimiks or a troop of backing dancers to put on a show. She didn’t need to either, dominating the stage and having 60k fans eating out the palm of her hand from start to finish. It was a joy to see an international pop star live up to the hype.

Exiting the stadium there was just enough time to see a girl forego the bother of squatting over a trough and just pissing on the floor before almost getting in the middle of a couple having a very vocal confrontation but that couldn’t dampen my spirits. Even an hour sat in traffic couldn’t wipe the smile of my face, being safe in the knowledge that I would soon be home to have a bloody good think about what I’d just witnessed.