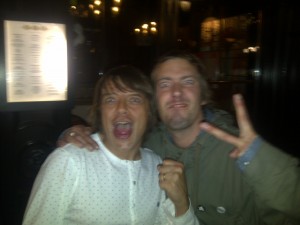 After a gruelling 4am rise we were in Amsterdam, checked in and showered ready for an early start on the ale. Plenty Amstel was required to be supped to cope with the giddyness and anticipation of witnessing the live resurection of The Stone Roses. Following a tiny show in Warringtonand a couple in Barcelonaover the weekend the Roses made their 4th outing with the original line up since 1990 at the 6000 capacityHeinekenMusic Hall.

Following a morning and afternoon of sampling the cultural delights ofAmsterdamwe hopped on a tram and made our way over to the venue for some more pre gig boozing. Big shout out to the Macc lads and thier Dutch mate Remco for enhancing this particular stage of the journey.

Pre gig tunes were immense. Hacienda classics “Strings of Life”, “Carino”, and “Rob Base” were a few of the highlights, before what appears to be the now standard walk on song, Diana Ross’ “Stoned Love”, the title very apt for theAmsterdamgig. The scene was set and they came on and straight into “I wanna be adored”. Amazing. I never thought I’d get to see these four together on the same stage so this was a special moment for me, and for the many others around me with some grown men moved to tears.

The crowd was bizarely subdued, although there were pockets of lads going off thier nut for it. Me and my lot included. The whole of the first album was played apart from “Bye Bye Badman”, and “Elephant Stone”. It was great to hear “Don’t Stop”, a 10 + minute version of “Fools Gold” with a new funked up intro and Squire dropping in “Second Coming” riffs and then there was a reworked “Tightrope” and Ian Browns rap of ‘Paid In Full’ during “Love Spreads”. Quality stuff. John Squire was looking cool as fuck, Mani having it and Reni keeping the beat like only he can, with Ian Brown shoulder shuffling and still the coolest front man around, even approaching his 50s. From where I was it was sounding great, although there may have been some issues with the monitors and Reni was spotted gesturing towards the sound desk and shaking his head. He looked particularly peeved during “Love Spreads”.

Then came the controversy. As they finished up on Love Spreads Ian Brown asked for applause for Mani, ‘the beat master’ Reni, John Squire, and lastly of course him self before saying  “If you want us to come back, we’re going up four storeys, so you have to cheer loud”. They then left the stage. Reni and Squire hugged as they went off. They were expected to play “I Am The Resurection” and the whole crowd stayed for this. Ian Brown came back on the stage on his own however, to address the crowd and informed us that “The drummer went home, I’m not joking, the drummer went home”. A few boos were heard, and some beer went flying but nothing as negative as stated in some reports. Browny said “take it all out on me I can take it, but the drummers went home, what can I say, the drummer’s a cunt”. The lights went up and that was that.

We returned home to headlines in the red tops rumouring about possible splits again. My advice would be not to worry one bit. We had a few beers with Mani after the show and he confirmed that that the problem was with the sound in the venue. He stated they were all pissed of with the sound but thats all. Resurection was down to be played as an encore but they weren’t able to do it and had struggled through most of the set. I managed to have a word with the sound man also, who also said that they had been complaining about the sound in the venue most of the evening. So, fret not folks, just a storm in a tea cup. As we left Mani he was in typical Mani mode and shouted out “see yer atHeatonPark” so there is only forward thinking from him. Despite the incident at the end it was still an amazing night and they all look bang up for it. The Roses revolution continues. Onwards…..

1. I Wanna be Adored