Do you miss music events like festivals and concerts? It is a very different feeling when you are able to be in the crowd, sing together your favorite songs, and enjoy the whole experience with hundreds or even thousands of people. In 2022 there are many music festivals scheduled, and hopefully, they will happen, and Corona won’t interfere. Let’s look over some of the best music festivals you can go to in 2022.

Coachella will take place in Indio, California, on the following dates — 15th to 17th of April and 22nd to 24th of April. After a break of 3 years, this festival will again take place! Coachella is one of the most famous music festivals, and many people from around the world will go to see it. Since it is at the beginning of the spring and those are the first days with nice weather, this event is considered the opening of the festival season. This year, the headliners are Billie Elish, Harry Styles, and many, many more stars.

However, people’s comfort level varies, and not everyone might be willing to go back into the crowd. But what if you would still want to enjoy some music event? Even before Corona, many entertainment events like concerts or festivals were live-streamed or recorded, and people could watch them live or recorded. This guide on pay-per-view streaming will explain to you how this works. It is an amazing option for people that are not able to attend an event or just don’t feel comfortable right now. Pay-per-view streaming will allow you to watch the event you want from the comfort of your home.

A fantastic festival in Novi Sad, Serbia, will take place from 7th to 10th of July. The first time that the festival took place was back in 2000, and it was actually a student protest in favor of democracy and against the Serbian government that was in power back then. Since then, the Exit Festival has gone a long way and is one of the most popular festivals in Europe. The scene of the festival is just stunning — a medieval fortress. Who wouldn’t want to go to such a festival that combines a historical place and modern music? This year Exit Festival will feature Calvin Harris, Iggy Azalea, James Arthur, Afrojack, Jax Jones, and others that will perform on the 16 stages that will be set up for the festival.

If you are a fan of music festivals, there is no way you haven’t been or at least heard of Glastonbury. In 2022 the festival will take place from 22nd to 26th of June and, as the name suggests, at Glastonbury, United Kingdom. This music event is also rich in history, and when it started, it was primarily associated with the hippy movement. And this was justified since hippies were the main visitors. Since the festival changed, all kinds of performers are being presented on the stages — rock, metal, pop, rap, house, folk, techno, and anything else you can think of. So in a way, the messages of the hippie movement remained at the core of the festival because there is something for everybody and everyone is welcome. 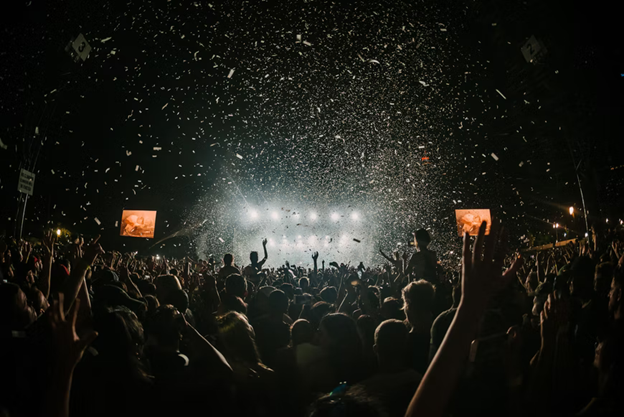 It won’t be a real article covering music festivals if we don’t mention Tomorrowland. This is maybe the biggest EDM event that brings together people from all over the world. The biggest names in the music industry, especially DJs and other creators and performance of electronic music, perform on the 14 stages. Tomorrowland is also one of the longest festivals, and it will be three weekends this time:

It will again take place in Belgium, and if you stay for at least 2 of the weekends, you can take the week in between to visit some great places there. Tomorrowland’s goal is to take you on a magical adventure, and the themes, the decoration, stages, and everything else will make you feel like you are in a magical world.

There are many other great events that you might want to visit later this year or maybe next year if you missed them in 2022, like the Ultra festival that already happened in March. Music is a passion of many people, and they love sharing it with others. This is why music festivals will always be the perfect place to meet people like you that want to enjoy their passion with others. Be quick and grab a ticket for the event you wish to see the most.

Can We Expect Daniel Negreanu to Do Well at WSOP 2022?

This Feeling Track of the Day: Reardon Love ‘Enfant Terrible’