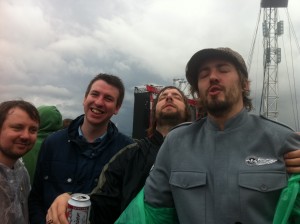 Saturday 30th June 2012 was like Christmas morning for me. Although I’d recently been able to catch the Roses in Amsterdam as part of their warm up gigs, this was the big one. Heaton Park.

Having caught the earliest train I could I was in Manchester for 10am and straight to KRO bar at Piccadilly Gardens to start the day with fry up and a pint. Although I had intentions of moving on to other bars this became the pre gig HQ with all comers welcome until we finally left for Heaton Park at 6.

The Friday night went of without a hitch and nothing but good reports were received despite apparent 2 hour queues for the bars and 30 minute queues for the toilets. There were no such problems this time around as bevies were easily obtained and pisses were taken with minimum hassle. The only ‘dampener’ was the rain, however I honestly don’t think there was one person inside HP who gave a shiny shite.

Hollie Cooke had started the day off for those in early enough then Professor Green took the stage to a barrage of wanker signs. Despite this he went down ok apparently, bringing on Lily Allen, who was sporting a Stone Roses T Shirt, for a number. I can’t really see the point in giving anyone shit, when they have personally invited by Ian Brown to play. Hey ho.

I arrived in time to see The Wailers, and their vibes got the place going as the sun came out briefly. They played the classics; Jamming, No Woman No Cry, Is This Love, One Love, Roots Rock Reggae, Could You Be Loved and Redemption Song and got everyone in a positive mood.

Beady Eye then took the stage. Again there were plenty around me ready to give these a bit of shit. I don’t care what anyone thinks of Liam, he’s a dying breed of proper rock n roll frontmen and should be celebrated. He gave a passionate performance, with the highlight being ‘Rock n Roll Star’, which he dedicated to “the one and only Ian Brown”. Liam put everything into his singing and you can tell he is genuinely made up about this reunion.

Then the moment. At 9pm, ‘Stone Love’ fades out and on walk Ian, John, Mai and Reni and straight into ‘I wanna be adored’. Every word is sang back at the band, as was pretty much every song they play. They rattled through a faultless 2 hour set. Everything was perfect. Any worries about Reni’s drumming were blown out the water, John was throwing in riffs all over the shop, Mani absolutely buzzing and Ian sounding as good as I’ve ever heard hm.

‘Don’t Stop’ was the highlight for me. Absolutely amazing and I’m still not entirely sure how he managed to sing the backwards bits! Browny was also still sticking in his half ‘Paid in Full’, half his own rap into ‘Love Spreads’ (see lyrics below) showing how much his confidence is flowing with this.

‘This Is The One’ was monumental, ‘Fools Gold’ breathtaking and ”Ten Story Love Song’ emotional. Ian Brown gave the monarchy some grief for celebrating ’60 years of tyranny’ as he introduced ‘Elizabeth My Dear’ then ‘I Am The Resurrection’ finished the set, before the 4 engaged in a heartwarming hug and off they went with no encore. Redemption song blared out and a firework display took place.

The reunion was always a risk. There was so much put on the line. But fuck me, they pulled this off and more. An incredible success. I honestly can’t remember a band sounding as good as The Stone Roses did Saturday 30th June 2012. The whole thing blew me away.

So, where next for the roses after they finish the tour dates. How can this get any bigger? Can it get any bigger? At this moment in time it feels like The Roses can do anything. From seemingly no where, The Stone Roses have come back, and are once again the most important band in the world.

A new album is a cert and a potential tour of the USA is lined up next year. Hopefully on these shores we will get to see some more shows like this. Glastonbury 2013 also seems a good bet. Personally I wouldn’t want to see them do the soulless arenas, and hope they stick to The Roses ethics and play ‘events’.

What a weekend. The whole thing was just a special time, especially for those who missed out on the band the first time round, or other big moments such as Knebworth. I’m honoured and privileged to have seen this.