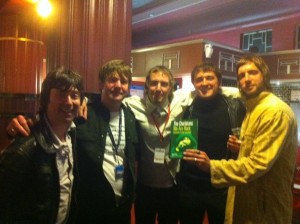 I’ve recently seen the reformed Happy Mondays, Inspiral Carpets, New Order and The Farm. I’m also due to witness the resurrection of the Stone Roses a couple of times over the next month. Whilst the cream of the crop from the mid 80’s to early 90’s are getting back together for one last pay day, there is one band, who despite may opportunities to break up, are still standing tall – The Charlatans.

The fact they stayed united through death of band members, drug problems, bastard accountants and solo albums speaks volumes. The fact they have consistently produced top albums says even more. The pinnacle of those albums is arguably Tellin Sories. It’s their most famous, and produced during an all time low for the band, with the death of original member, Rob Collins during the recording sessions. To mark the 15th anniversary of the album they set off on the road for 3 gigs to play the album in full and we headed down to Hammersmith to witness theLondon leg. 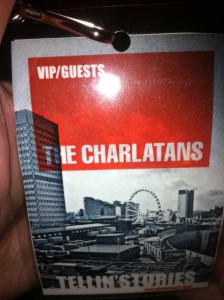 Tim Burgess was on fine form and looking more distinct than ever with his bleached blonde bowl cut and all white attire. The gig for me was nothing more than amazing. Being a bit of Charlantas nerd, maybe I’m a bit blinkered but I could honestly not pick fault. Tellin Stories was played in full from start to finish in order, with mega B sides ‘Clean Up Kid’ and ‘Don’t Need a Gun’ being slipped in between. It was a pleasure to see them play the likes of ‘Get on It’, ‘With no Shoes’ and ‘How Can You Leave Us’ which rarely, if ever, get an outing.

I once described The Charlatans in an article as a ‘Thinking mans Oasis and a drinking mans Roses’. I’m not 100% sure where I was going with that but I think it has something to do with them being criminally underrated in comparison to their peers. I still believe that. Tim Burgess and co should be held in greater esteem than they already are. The ‘encore’ (which consisted of 9 songs so I’m not really sure if it’s classed as an encore!) only strengthened this belief as they rattled through some of their greatest hits spanning their career outside of Tellin Stories including Forever, Soul Saver and Blackened Blue Eyes and standard set closer Sproston Green.

In all the gigs I’ve been to at the Apollo I’ve never seen a crowd go as nuts as they did for Sproston Green. Every hand in their air, every person bouncing. I myself nearly fell over the balcony. Hopefully they will continue as ever, and we will not have to endure a break up and reformation. A total success, I want to do it all over again.

18. Just When You’re Thinkin’ Things Over