I must start by apologising to any Gigslutz readers who were expecting a quick review of The Stone Roses Finsbury Park gigs this weekend just gone. The reasons for the delay can solely be attributed to a mammoth Roses comedown. In the words of Mr Brown himself, “what goes up, must come down” and he has certainly been proved correct this week. Since Saturday evening drew to a close in Finsbury Park everything seems beige and I’ve been walking around like some melancholic teenager who’s just been dumped, whilst every hour mulling over the possibilities of getting to Isle of Wight then to Glasgow for this weekend shows. At long last though I can finally bring you the story of a weekend with The Stone Roses.

It’s fair to say last summer’s Heaton Park shows exceeded all expectations for Stone Roses fans. I was one of those who were worried by the reunions and despite never having the opportunity to see The Roses live I was more than a little apprehensive about the reunion. I did not want the legend tarnished and them to be remembered as those that fucked it up for one last pay day.

I shouldn’t have worried. The whole reunion summer was one huge success. The Roses proved every single doubter wrong and surpassed all expectations along the way.

In the lead up to the Finsbury Park shows I was not feeling the same nervous excitement and anticipation as I was leading up to Heaton Park. This time around I knew that they could pull anything off. The lack of new material and the Europeans warm up gigs being limited to an unattainable Paris double header on a Monday and Tuesday had not helped either.

The Made of Stone film did poke the fire considerably however. Despite having to watch yours truly in the Amsterdam scenes with third degree gurns, and sun glasses on whilst in doors at the gig, it was still the kick up the arse I needed.

The buzz was back and on the morning of the show I woke up every half hour from 4 am until I was finally allowed up. The butterflies had returned and the minutes ticked down slowly until the first Red Stripe could be opened as the clock hit 11. We were off.

An incident free journey to London was welcomed before dodging the gaggles of Reni hats outside Kings Cross station to make my way to Push Studios and a quick cuppa with the folk of the Gigslutz Radio Show and Clash Magazine before heading to the Big Chill roof top bar to meet the first comers in our crew.

It had been almost a year to the day that I had stumbled along the carriages of a train from Amsterdam Central Station to the Heineken Music Hall whilst on route to watch The Roses play the infamous “The drummer’s a cunt” gig. Whilst on that train I bumped into a group of Macclesfield lads looking more off their nut than me and with them Michael (a man who claimed to be able to cure Parkinson’s disease) and an intimidating Dutchman body guard going by the name of Remco. Friendships were forged under the influence of Amsterdam’s cultural delights and the love of The Roses. It was great to see the Great Train Knobbers united once again. They were joined by the lads from Sunderland who has already put in a cracking 7 hour drinking session on their way down and then the much fresher looking Jenna who came straight from the Closer Magazine office and quickly caught up by ordering (mistakenly so I’m told) 4 double Jack Daniels & Coke.

So after repaying Remco’s Dutch hospitality with some of our own (meeeeow ;-)) we finished our pints (or 4 large JD’s) and made the short journey up to Finsbury Park. The walk from Finsbury Park tube was littered with the usual ticket touts who managed to sort 3 of us out for less than the face value of one ticket. Bingo. You have to wonder what the point is in buying face value tickets anymore for the majority of gigs. 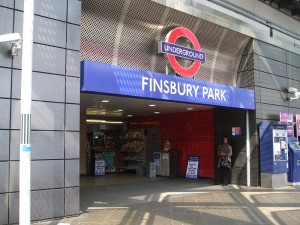 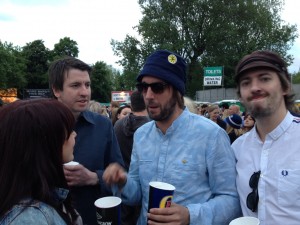 This was my first visit to Finsbury Park for a gig and it has to be said it was pretty poor set up. The queues for the bars were outrageous and gangways to get through to the main area were overly congested. The 4 pint beer carrier on sale for £4.50 was a ridiculous rip off also. Still, all gripes were banished as ‘Stoned Love’ was heard over the speakers, thus signalling the beginning of what we came for.

Reni walked on stage with a ‘Who the Fuck is Liam Gallagher’ T shirt held up. Whether this was a  serious jab at Mr Gallagher or not we do not know but one thing for certain is that not person held any thoughts of LG as the familiar ‘Dum Dum Dum Dum’ of Mani’s bass signalled the beginning of ‘Adored’. In the summer sun with top mates and likeminded folk; bliss. 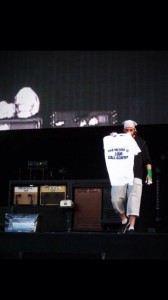 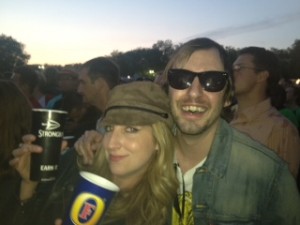 The outro of ‘Adored’ was played again and became the beginning of ‘Elephant Stone’. It was great to hear Elephant Stone in the set having been excluded for the whole of the previous year’s tour.

The sound from the side where we were originally perched was a bit poor but rectified by moving into the middle. The extra congestion did mean some of our pint stash was knocked over by an overly zealous angry groover. A polite word in ear from Remco soon saw him move on.

Notable points of the gig were

Fool’s gold was still as mind twistingly good as the last tour. Whether you like The Stone Roses or not, the mesmerising dexterous funk explosion of the live version of Fools Gold should be witnessed by everyone. At one point Reni was holding the 50,000 crowd in his hands alone. What I would say though is try to watch it without 6 foot 3, 15 stone Manc grooving on your shoulders. This is not advised at home. 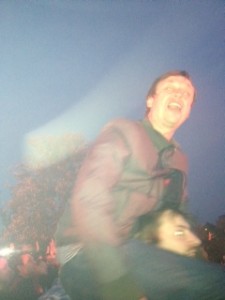 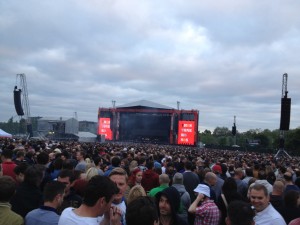 With no encore, Resurrection brought the set to an end with Browny heading down into the crowd during the outro. At one point as he tried to get back up on stage he watched up at his 3 other band mates and was a big of a fan as any of us.

As we filtered out it was obvious a tube was never going to happen so we took the long road down to The Aldwyn Castle for a couple of pints whilst the crowds dies down. Whilst here it was noticed I am the double of Roland Rat. YEEEAAAAHHHH. 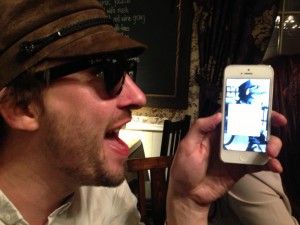 As the pints went down we were able to recap on what was another triumphant show. Luckily we were able to go back for seconds on the Saturday. The Roses truly are something special, it’s almost impossible to describe what it is that makes them in an army of 1. Who knows how long they will stay together and continue to play live, let’s just enjoy it while we can and dream of new material. One thing for certain, those off to Glasgow Green this weekend are in for something special.

With no mobile signals in the area and the life span on the iPhone at 1% it meant that after one final pit stop it was time to head back to South East London and hope we didn’t wake Gigslutz David on our return. Luckily for us he was sat in his Kitchen with a cigarette and Made of Stone blasting out studying the lyrics. “Unbelievable Steve, they’re fucking unbelievable” 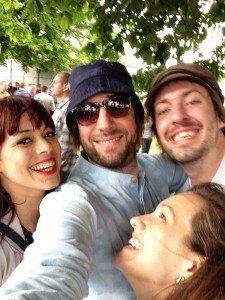 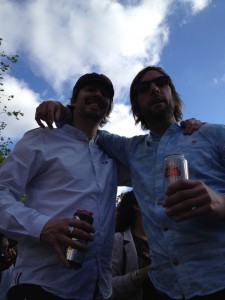