I’m outside the Finsbury pub and I’ve thrown away my mud-soaked scarf in a mad rush, and after a weather check for Scandinavia, off go my hopes of sunshine.  I meet Brucie and Iain at the airport and before I know it we’re hauling three bags of merch and a number of metal, tool filled boxes that raise the eyebrows of our now irritated airport assistant.

There’s nothing but acres of snow surrounding our hotel in Oslo, but it’s rather fancy and we’ve stocked up on beers to celebrate Brucie’s birthday. Which, to be fair, ended up being us pair commentating on that nightmare Russia have got themselves into until Andy arrives, still jet lagged from touring Australia with the Libs and knackered from the last minute show the band played the night before.

They take me on a trip down memory lane from their times on private jets with Atomic Kitten and The Babyshambles. We come to the conclusion that we should pull a Bruce Dickinson and fly our own plane for the next tour.

Sentrum Scene is an utter maze of a venue, the security guard keeps giving me this “do you know where the fuck you’re going?” look and I offer nothing but sheepish glances. 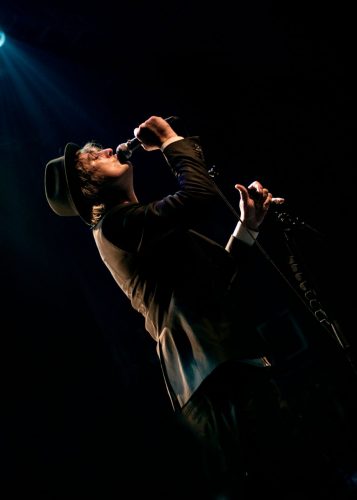 It’s refreshing to not have a backstage area swarming with people, the only guests we have are a few photographers, one of which is Stian Anderson, a man who wore a black eye with pride after being kicked in the face by Iggy Pop.

A jet lagged Miki is the first to arrive with a suitcase of Californian gifts, then the band finally arrive, soundcheck is done and dusted and we’re on the roll…

Kinda, Peter’s half an hour late but what’s really to expect. There’s talk of no curfew and the set was a belter, a few sheep-shaggin heckles to Trampolene’s Jack Jones and a bit of hat cricket with a fan on stage, all is well and Fuck Forever causes it’s usual chaos.

We’ve to spend the night in the tour bus and sniff out a karaoke bar opposite. The rider had been ransacked of it’s booze, any natural nerves that come with singing along to lyrics on a TV had disintegrated, and before I know it I’m wearing a pink wig and we’re squashed in a lit-up room singing Oasis bangers.

It’s all fun and games, especially for the fan who’s having the best night of his life, however not so much the bar owner who is relaying around collecting booze from the bus that’s been snuck in. We haul back on deck and after a sing song of ‘I Love You but you’re Boring’ with Peter, we pass out at different times, some getting the first bit of sleep in days, some not at all (Jack, how he does it is beyond me).

Tomorrow we’ll start the 10 hour journey to Denmark, I clamber into my bunk with the familiar warm feeling of being back on tour. It’s always a complete chaotic, thrilling experience sharing a bus with the band and crew. Beneath the constant piss-taking and lack of sleep/too much beer, harmless spats, there’s the love of an unconventional family. 11 of us, all from different walks of life and an adoration of music, all squished into a tour bus. There’s nowhere I’d rather be.

This Feeling Track of the Day : Neil Morrison ‘Nowhere, Unexpectedly’

This Feeling Track of the Day : The Gallery ‘Force Fed Plans’