Tramlines, Sheffield’s biggest city-based music festival has announced the lineup for its 2021 event, taking place at Hillsborough Park from Friday 23rd to Sunday 25th July.  Headliners have been revealed as The Streets, Royal Blood and Richard Ashcroft, plus over 40 more acts have been unveiled including The Kooks, DMA’s, Pale Waves, Little Simz, The Pigeon Detectives, Sophie Ellis-Bextor, Mahalia, Everything Everything, Jake Bugg, Blossoms, The Sherlocks, Dizzee Rascal, Tom Walker, The Fratellis, Sundara Karma and more.

With a large number of ticket buyers for the postponed 2020 event retaining their tickets, only a very limited number of Weekend tickets will be available, currently priced at £130 (+bf). Day tickets for Tramlines will be priced from £45 (+bf) and can be purchased alongside other ticket options from www.tramlines.org.uk. The final batch of Weekend and Day tickets will be on sale on Friday 30th April at 12pm. Sign up for ticket alerts here: http://bit.ly/TL21Tickets

Tramlines 2021 takes place after the first ever sell out event in 2019 and an unplanned hiatus in 2020. Since humble beginnings in 2009 when Tramlines launched as a free, multi-venue, inner-city festival, Tramlines is now a firm fixture on the UK festival circuit receiving many accolades including the UK Festival Award for Best Metropolitan Festival in 2019 and 2011. In keeping with the last two events, Tramlines Festival 2021 takes place in one greenfield site, Hillsborough Park, just a few miles North West of Sheffield City Centre and will feature five stages of music, comedy, performance, art, and handpicked food and craft ales.

The Friday night headliner on ‘Sarah Nulty’s Main Stage’ will be The Streets whose enigmatic frontman, Mike Skinner has performed exclusive DJ sets for Tramlines in the past but performs live for the first time providing a perfect start to the weekend’s festivities. Brit Award winning rock duo, Royal Blood are the Saturday headliners, hot on the heels of their third LP, ‘Typhoons’ whilst former Verve frontman, Richard Ashcroft takes the prestigious Sunday night slot.

Tramlines Festival Operations Director, Timm Cleasby said, “The pandemic has hit us all very hard in a million different ways but the support that Sheffield has already shown us is incredibly humbling for us all. We’re super excited to bring you what I feel is one of our strongest line ups. The three main headliners have been on my list for a good while now and we’ve got some brilliant returning friends as well. All this said, we’re very serious about the public’s safety and take our responsibilities regarding COVID very seriously. We’re keeping a close eye on developments and will act accordingly should things change.”

The 2021 lineup for Tramlines is packed with some of the UK’s all-time rock and indie favourites. Appearing are poster boys of the noughties indie wave scene, The Kooks, ‘Chelsea Dagger’ indie swingers The Fratellis, the platinum selling The Pigeon Detectives, and Blossoms who were inspired by Manchester’s indie rock movement. Also appearing will be The Snuts who’s debut indie rock LP, ‘W.L.’ was launched in April 2021 and shot straight to number 1 in the charts. Adding an international injection to the rock offering are, from Sydney down under, the DMA’s who’ll bring rock ballads aplenty. Also on the bill is platinum selling artist Sophie Ellis-Bextor and neo soul empress, Mahalia. 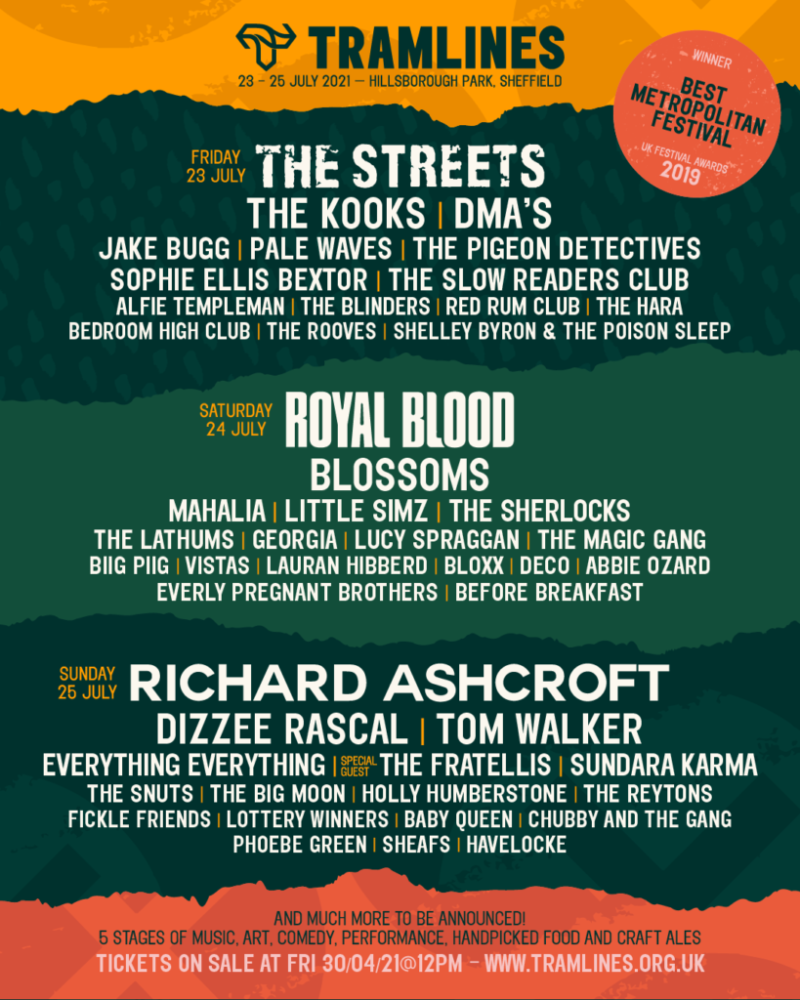 Dizzee Rascal is back in 2021. The ‘Bonkers’ artist performed an electrifying set for Tramlines in Ponderosa Park back in 2015, regarded by many as one of the best Tramlines shows from over a decade of events. Also taking to the mic over the weekend is Little Simz, a furiously talented rapper hotly tipped by Dizzee, whose trademark uncompromising style will light up the stage on Saturday.

As ever, Tramlines welcomes a slew of talent from across its home city and the Yorkshire regions. The ever popular four-piece The Sherlocks join the bill whose impressive credits include being the first unsigned band after the Arctic Monkeys to sell out the legendary independent venue, the Leadmill. The ever-cherished singer and songwriter Lucy Spraggan who’ll deliver her folk pop signature style as seen on album number five released in 2019 and on her recent quirky cover of The Proclaimers ‘500 Miles’. This comes alongside the heavy, fast-paced indie sounds of The Reytons, the loud punk sounds of The Blinders, and Sheffield favourites the Everly Pregnant Brothers renowned for their amusing spoof numbers. Other local and upcoming acts include Biig Piig, Before Breakfast and Bloxx.

This is just the first wave of talent set to perform at Tramlines 2021. Festival-goers should keep an eye out for further lineup announcements, plus further announcements from across the festival site including, comedy and cabaret entertainment, fabulous food and drink offerings and much much more.

Tramlines Festival will be working closely with the local authorities and following all the latest government guidance. If for any reason the festival is not able to take place then in keeping with 2020, ticket buyers will have the option to retain their ticket for next year’s event  or recieve a face value  refund on their purchase prices. More information here: https://tramlines.org.uk/update-on-covid-19/

Chubby and the Gang

Available from www.tramlines.org.uk at 12pm on Friday 30th April

This Feeling Track of the Day: Gen and the Degenerates ‘Underwear’