Several sources are suggesting that V festival is set to leave its Weston Park site in Staffordshire ahead of next year’s event in August.

According to reports in Music Week, several sources close to the festival have revealed that Weston Park will not host V next year, and the event at its twin site in Chelmsford may not be under the name ‘V’.

In recent years V has become somewhat of a pop paradise, with Justin Bieber, Justin Timberlake and Beyonce having headlined the festival over the last few years. This year the two closing acts chosen were Pink and Jay Z.

However, since moving to Staffordshire in 1999 the site has seen headliners including The Stone Roses, Oasis, Arctic Monkeys and Kasabian to name but a few, with 2009 (Below) being a particular highlight as it eclipsed ‘major’ festivals listing for the year with an all out indie extravaganza.

These reports of a move remain unconfirmed, but an official statement from the festival is expected in October. 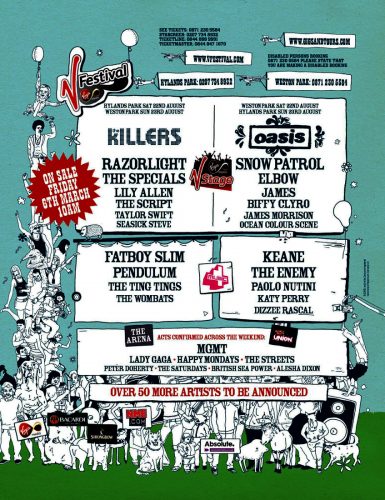 *PREMIERE* This Feeling Track of the Day : Creeping Jean ‘Honey In The Sun’