A drummer’s drummer was Fela Kuti; that’s fair to say.

He was also a renegade of the purest form. A whirlwind of fire with lava in his bone marrow.

The sort of character whose stories and reports would have surely had Dylan pouring a few late night whiskies and picking the strings deep into the night.

I’ll be honest and admit that my knowledge of Kuti’s music is limited. But I must have picked some fuel up from his fire along the way as I know that he was an activist, who put his money where his mouth was and fought for many causes for the common person in the street.

Delving into Kuti’s past seems to be an infinite task. Like unwrapping a glowing orb but each layer presents more shocks to the dome, raised eyebrows, nods of respect and a faster pulse.

Born in 1938 to middle class parents he was sent to London aged 20 to study medicine but fell into the study of music instead. Didn’t we all. He married 2 years later for the first time.

In ’67 he left for Ghana for inspiration and eventually termed the ensuing development ‘Afrobeat’. He took this to the U.S where he fell into the Black Power movement.

In ’70 Fela formed a commune incorporating his studio, so vast in activity and number that he later declared it independent from the Nigerian state. It was called the Kalakuta Republic. Its commune and the music it was producing was so popular that naturally it ruffled the government’s nervous feathers.

In ’72 the government raided the commune for the first time.

By this point Kuti had met Ginger Baker in London a few years earlier and Baker had arrived in order to find Kuti and explore the musical possibilities among musicians there.

They recorded Fela Ransome-Kuti and the Africa 70 with Ginger Baker: Live, which Baker claimed was some of his best work. This was followed by Stratavarious.

In ’77 the band released ‘Zombie’ which was a direct attack on the Nigerian military and the government were so enraged that 1000 soldiers attacked the commune, battered Kuti and threw his mother from a window.

Fela’s response was to deliver his Mother’s coffin to the General’s office in Lagos. What a move!

By ’78 Fela had married 27 women at a celebration in order to mark the anniversary of the commune attack.

He staged 2 controversial gigs that year that saw some immense riots and he was banned from Ghana. Many of his musicians left him under the duress of being a part of Kuti’s destiny.

Kuti refused to buckle. He formed a new band and named it the ‘Egypt 80s’ whom he continued to tour with and take on the establishment.

Kuti was constantly speaking in open opposition to the Muhammadu Buhari lead government and was duly jailed in ’84 on a charge of currency smuggling. An act of conspiracy.

He was released after 20 months and immediately divorced all of his 12 remaining wives stating that marriage caused “jealousy and selfishness”. Erm…

In ’86 he played at Giants Stadium on New Jersey for an Amnesty International gig where a young Bono was inspired in full by Kuti.

An anti-apartheid fuelled record ‘Beasts of No Nation’ was released in ’89 and the cover depicted Ronald Reagan, Maggie Thatcher and Botha in unflattering caracatures. Some may say flattering, perhaps. 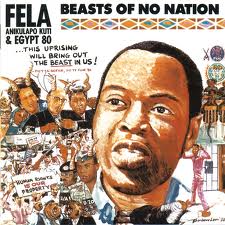 In ’93 Kuti was falsely arrested for murder and the fight against military corruption was starting to take its toll.

His older brother announced his death on 3rd August 1997 from Kaposis Sarcoma which had AIDS as its vehicle. Over 1 million people visited his funeral.

So there we are, a snap shot, and there we were, on Friday at the tribute to honour the Black President and the repackaging and release of his entire back catalogue. The concert was at the 229 Club in Great Portland Street. As we approached we saw the queue snaking around the venue and down the street, 5 wide. This really left no doubt as to the stature of this man. There were countless people outside without ticket trying to squeeze past the increasingly harassed security.

The gig really was something special. It was a mash up of artists, musicians, sounds and creeds, and impossible to keep tabs on the structure of it as people were floating on and off the stage. The most prominent feature for me was that the packed stage seemed to be having a party every part as good as us on the floor.

Kuti’s afrobeat sound was upheld in a fury of instruments, vocals, horns, double sax, extended length of tracks and all swirled around amidst a kaleidoscope of colour, humour, improv and furious sounds.

Artists performing in support on the night were Afrikan Boy, Keziah Jones the legend! TY, Blak Twang, BREIS, KOF, Terri Walker, Bumi Thomas and show stealing Shingai Shoniwa of the Noisettes. Man that gold mermaid dress and booty! “Is that a lady??!”… “YEAAAAH” cried the crowd. Over and over. In full effect! Ironically the only slight negative of the night was Ginger Baker who spurned 3 separate stage calls that were clearly built up for his benefit and it became clear to all that there were side stage rumblings and those on stage who had given their all for the duration, were agitated and rightly pissed off. Seemed to me that Ginger’s reputation for being a self obsessed narcissist was being confirmed at a moment when he was there to shine the light on someone who had long passed on.

He played a couple of tracks with a face as stern as a Grange Hill Head Master but this couldn’t quell the crowd who shortly after vacated the place and spilled out joyously onto the street.

The Black President would have been proud I’m sure and as I stood outside watching people exit grinning, dancing and singing, I couldn’t help thinking that many of them would have dug into Kuti’s history before or after the gig, and all of them would have gone home better human beings than when they arrived. 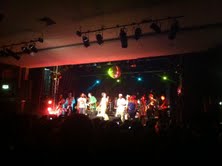 THE HUNTER – The Great Escape, Brighton 2013