Rejoice!  Somebody has finally played a stack of quality indie records to the youth of Canada, the country that previously “gifted” us with Bryan Adams and Justin Bieber, and man they’ve got creative with it!  Proof that in the right hands indie-pop can sound truly seminal.  And short.  More on that later…

On Wednesday night I stood at the foot of the stage with a sold out crowd of seriously good-looking Mancunians in the Deaf Institute to watch Toronto’s finest export.  The festivities began with support from Moon King, the band’s buddies and fellow Torontonians (pretty sure I just made up a word) – which leads to me to believe there’s something pretty exciting going on in that city right now. 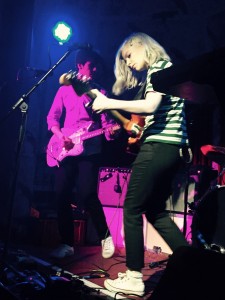 Singer Danny is petite in stature, baggy in trouser and big in lungs.  Starting with a soft electro-psyche melody, they completely mislead me into thinking I was about to watch the token whiney support act.  A sharp kick of the bass drum suddenly I was watching something far more grunge, of course with a modern and fresh twist.  They were an inspired choice of accompaniment; there’s more than a whiff of Morrissey around Danny’s performance, while guitarist Maddy is one of the most bad ass-looking women I’ve seen for a while and, to quote Wayne’s World, she can really wail.

When Alvvays take the stage it’s excitement and envy.  They look like that group of friends in the pub that you weirdly convince you that they’re having more fun than you, but let’s face it, they probably are.  In matching white plimsoles, even their instruments look cool FFS!  But this is definitely not style over substance.

Live, they sound far less sugary than the record and their musicianship really shines.  Bryan Murphy and Phil MacIsaac are locked in at the back, providing a seriously solid foundation, while Kerri MacLellan sprinkles each song with pixie dust harmonies from the keyboard.  Without the polish of the studio, the most distinctive and exciting difference is the sound of Alec O’Hanley’s guitar.  It’s far prominent in a stripped back setting, and he plays it in a way I reckon would make Johnny Marr proud – truly exceptional.

And finally there’s Molly Rankin.  Oh Molly, the teeny indie Marilyn with the creamy pitch-perfect vocals and an Angel Delight voice. ‘Singing Molly’ is painfully cool, aloof and can totally rock a guitar solo.  ‘Chatting between songs Molly’ is giggly, laid back and friendly.  She appeals to the local crowd professing a teenage obsession with Noel Gallagher, and instigates a collective sharp intake of breath when sharing that her first Oasis album was ‘Heathen Chemistry’. 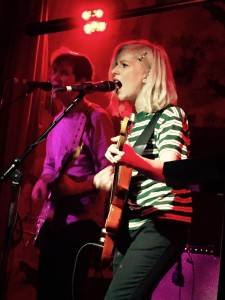 The set is brief, as Alec said after with a 9-track LP it’s difficult to pad out.  But pad they did with a lovely cover of a Deer Hunter B-Side.  Highlights for me were ‘Adult Diversion’, ‘Ones Who Love You’ and of course, ‘Marry Me, Archie’.  But my absolute favourite was ‘Party Police’.  For me this track encapsulates the band; guitars as jangly as ‘This Charming Man’, with poignant lyrics – the delivery of which dance on a knife-edge of both sassy and vulnerable.  This turns the hall into a 1980s Prom Night, at that pivotal point when the heroine may or may not get the boy, and it’s all taffeta puff-ball skirts and singular tears.

There’s clearly something happening in Toronto, a bubbling underground scene that’s about to burst over the parapet, with Alvvays leading the charge.  They are the cool and sexy band of the future, and if they carry on this way with the second album and some new tracks, the next time they’re gonna have to make like Jaws and get a bigger boat.  Absolutely loved.

Ones To Watch: Asylums