To pick up just one essential album out of the entire Primal Scream discography is an almost impossible mission. Their entire back catalogue couldn’t be more schizophrenic and diverse, with each album holding it’s own unique dimensions that put Primal Scream into a league on their own. Whether you know them because you’re into drugs, in other words you do your naughty stuff whilst listening to ‘Loaded’ and ‘Higher Than The Sun’ or maybe because ‘Country Girl’ and ‘Dolls’ were big MTV alternative rock hits during your teenage years, Primal Scream have tried so many different outfits it’s impossible to pin point them to one genre. But deep inside of my twisted mind, it’s XTRMNTR that puts all the pieces of the Primal jigsaw together. Both critically acclaimed and highly controversial, it’s an album which needs to be handled very carefully. 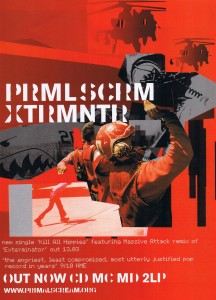 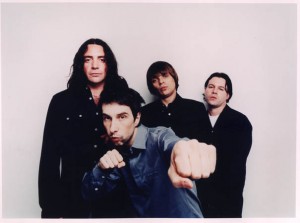 There are a couple of key-reasons why XTRMNTR should be regarded as the Screams’ most important intellectually challenging and artistically beautiful work. The perfect soundtrack to the angst of a new century is undoubtedly the first one for me. It’s the end of 1999, everyone is going crazy and paranoid about the millennium bug, all the computers will crash, all the data will be lost and there won’t be any 21st century to celebrate. In fact, Primal Scream wait until January 2000 to open the bottle of champagne and cheer to the Apocalypse. Madness, claustrophobia, political uncertainty and anxiety are all stirred up in this explosive cocktail, less alcoholic than ‘Screamadelica’ but equally lethal. Do we want to talk about the futuristic sound? What-a-sound, for Heaven’s sake.  Pushing their electronic beats to rave territory without losing their edge, ‘Swastika Eyes’ and ‘Blood Money’ are breathtakingly good, showing The Prodigy how to do their jobs with one fell swoop . 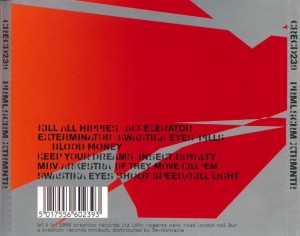 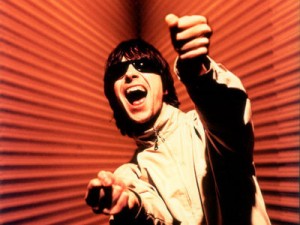 Furthermore, the contrast between beauty and violence is the other great achievement of this album. It’s uncomfortable, far too electronic to be classified as indie rock, too risqué to be dance floor material and too different from their back catalogue; what can anyone make out of it? Disastrous as it might sound on a piece of paper, in reality it is superior to both ‘Screamadelica’ and the matured ‘Riot City Blues’. Believe me, it takes guts, liver, pride and attitude to outshine the 1991 seminal masterpiece. “You ain’t nothing/ You got nothing to say / Shine a light on you / You fade away, fade away” What a better way to salute amused critics and puzzled fans? Primal Scream can do whatever they want and XTRMNTR is the postcard from a gloomy future to the modern age.

Yet, what still affects me the most is the graphic feeling of the album where violence and restlessness are presented in details. ‘Kill All Hippies’ is so disturbing, it reminds me of Anthony Burgess’ ‘A Clockwork Orange’; how it manages to stay sexy and captivating is a mystery I can’t solve. Then you have this permeating sense of coldness which wouldn’t be out of place in the dystopian scenario of Blade Runner. Minus the fact Rick Deckard is less ballsy and indecent than real life hero Bobby Gillespie. When XTRMNTR verges into more lurid and macabre territories – I’m talking about sense of destruction and annihilation like in ‘Exterminator’- it still remains beautiful and poetic. A quintessential masterpiece, XTRMNTR is glamorous violence or violent art, whichever way you want to read it. 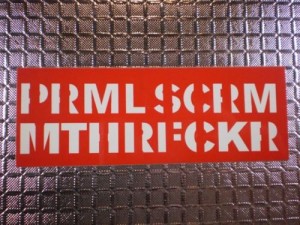 Reinvention and experimentation, these are the main reasons why I will never stop celebrating Primal Scream. And after all these years, I still don’t know whether I prefer them as junk buddies, blues rock cowboys or political rioters. Do their songs work better at house parties or as anti-totalitarianism anthems? I love the self-destructive soul of ‘Screamadelica’ but I can’t deny the charm and power of a political album like the recent ‘More Light’. However, I do believe XTRMNTR ticks the two aforementioned boxes in the most accomplished way. A punch in the stomach, a turning point career step that swallows, kills and vomits everything around it. Since the world is rotten, songs simply reflect its decay and perverseness. And the marvellous thing is that you can actually dance to nearly all the tunes too. As long as Bobby Gillespie is the preacher, the world will always be a little bit more wasted but at least it will be cynical, critical and intelligent. Long live Primal Scream.

View all posts by Silvia Rucchin →

Are We A Bus? The Inside Story Of Life On The Road Part 15