This Saturday will see the long awaited live return of Andrew Metcalfe. The former frontman of Sound Of Guns is about to embark on a solo career and is kicking it off in him hometown in Liverpool. We caught up with the man himself to see what is in store…

Hello mate! Firstly how are you and how is preparation going for your gigs at This Feeling Liverpool this weekend?

It’s going really well thanks, we’ve had a few line up changes recently but it’s sounding ace! Cant wait for people to hear the new songs.

Top! I’ll be looking forward to the new numbers. Are you nervous about it with it being your first solo gig?

I’m deffo not nervous man! More excited than anything else. I’ve got a great band behind me which is the hardest part of starting a new project. The reaction to what I’m doing has so far has been really positive

How far do you think you can take it on your own? We’ve seen people like Miles Kane really take a solo artist by the scruff of the neck and push on. Is this the aim? 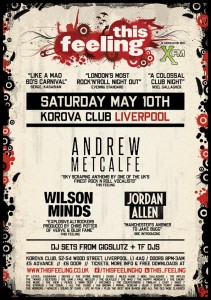 Yeah it was some night, that! So, should fans expect a different musical direction from your solo stuff, that from when you fronted the band?

Yes and no! There is a lot more variation in what I’m doing song wise now, there’s still big chorus and big guitars on some songs because that’s what I’m into, but there’s also really understated songs in the set which have just as much impact.

Have you found being a solo artist means you can be more creative?

Are there any Liverpool bands emerging at the minute that you like the look of?

The Sundowners, Serotonin, Circa Waves are all sounding pretty cool.

And whats next in the pipeline? Gigs, tours and new releases lined up?

We’ll be announcing details for an E.P release and a UK tour pretty soon.

Would you like to pick a 3 song mini playlist for us to play on the next Gigslutz Radio show?

Kasabian ‘Underdog’, John Lennon ‘Instant Karma’, and ‘Whatever Happened To My Rock n Roll’ by BRMC

Top choices! Cheers for talking to us and see you Saturday!

Andrew Metcalfe plays This Feeling, Liverpool @ Korova on Saturday 10th May and will play This Feeling, Purple Turtle, Camden on 16th May.