Whilst there was a wealth of talent to see at 2019’s All Points East Festival, we were drawn to the newly refurbished JägerHaus on Friday 31st May to see LA noise merchants HEALTH, who were headlining the lineup for DIY Magazine’s “Jäger Curtain Call”. We caught up with Jake Duzsik (vocals, guitar), John Famiglietti (bass/electronics) and BJ Miller (drums) in their tent backstage as the sounds of Ladbybird’s punk inspired tunes blared out in the background. Having only just arrived at the festival, the trio were in good spirits and ready to pulverize the eardrums of the Jägerhaus crowd…

Hello HEALTH! You’ve just returned from Ireland where you played three gigs in Dublin, Galway & Belfast. Talk us through some of the highlights of your time there…

John: I had the best pint of Guinness ever in Galway. It was advertised as such, and it delivered.

Jake: We hadn’t been to Dublin or Belfast in a really long time and we’d never played in Galway before. We had four days there and it was raining, but it was really beautiful.

Sounds good. What are your anticipations for tonight’s gig in the Jägerhaus?

John: We’ve played a lot of Jäger sponsored events, and when the Jäger’s flowing….I’m trying to think of something that rhymes? The Jäger brings the emotions out of ya.

BJ: When the Jäger’s flowing, the emotions are growing?

John: We have a bottle of Jäger right here with “HEALTH” printed on it.

Jake: Usually people are pretty loose, but you never really know what’s going to happen. The people that are coming over here [to the Jägerhaus] are young and they’re having fun. We’re the old bulls though, the young cats are playing now. They’re the sound of the future, we’re the sound of Christmas past…

Let’s just say we’re all 23…You’ve been touring to promote your latest album, VOL 4:: Slaves Of Fear. What are you most proud of about this record?

Jake: I love how heavy it is. We just came off a four and a half week US tour and it was great playing at home to our own fans. Being able to release a new record and have your fans form a relationship with that record, and to go out and play and see it received well is so rewarding. Being able to tour on our own terms has been really fun too.

John: The fandom on this record has been amazing. 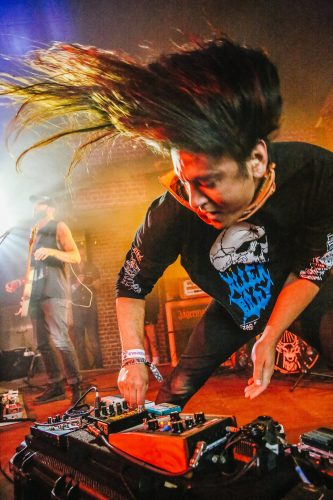 How does it differ from your last album, Death Magic?

Jake: I’d say it’s rawer and darker. There’s a little bit of a pop vent to Death Magic in some of the songs, and it’s slightly more polished.  With the new songs, there are elements that are more aggressive which makes them fun to play live. There’s a lot more song oriented structure on Death Magic – verse, chorus, bridge – there’s not as much of a preoccupation with that on Slaves Of Fear.

You gained lots of new fans when you wrote the soundtrack for video game Max Payne 3 in 2012. Are there any soundtracks – video game or otherwise – that you’re fans of, or that inspired you to write the music you do now?

John: Probably not a direct inspiration…

Jake: I do think there’s a lot of cinema score that’s had an influence on us. Even some of Hans Zimmer’s huge action move-type scores, the sound design in them and the amount of drama and gravitas there is to the production I think has been inspiring to us. The sound palette that gets utilized in scoring is avoided in song-based music because those elements are so overwhelming. If you’re trying to have a pop hook or a lyric that’s ear-wormy, you can’t have this gigantic sound over it. But that doesn’t really matter to us, we can do that. So those elements of scoring have definitely had an influence.

You’ve collaborated with the likes of Ghostmayne, Youth Code, and Soccer Mommy. What do you think makes for a good collaboration? Anyone you’d like to work with in the future?

Jake: We have some ideas, but there are no direct future collaborations planned as of yet.

Jake: ACDC! As far as what makes for a good collaboration, it’s just if you’re excited for what the other artist or band does musically, that’s where you start. Then hopefully something creative comes out of it.

You’re headlining Jägerhaus tonight, but you’ve been a support band for acts like Nine Inch Nails and recently The Neighbourhood. You also choose support artists for your own shows too, so what are the perks of playing as a support band, and booking bands to support you?

Jake: The perks of being a support band on a tour with Nine Inch Nails is that you have the opportunity to play to a massive amount of new people that you can expose your music to, and hopefully make some new fans.

Picking a support band for your own headline shows to us is about wanting to have something that’s going to bring the energy up for the show, and have it be a band that our fans will resonate with, so hopefully they can make some new fans too. We are very careful about wanting to pick something that drives the whole package of the show, rather than be like “Oh, they’re a buzz band, maybe they’ll help us sell tickets”. We like to think that’s what people are looking for when they book us as well. I think that we have a lot of respect for support bands if they’re opening for us, because sometimes people can be oblivious to stuff, like not making sure that the support band has enough food backstage, or that people are not being amicable to them.

That seems fair. Finally, who would you recommend listening to at the moment?

Jake: I listened to the new Idles record quite a bit, they played earlier on today. It seems like they’re inspiring loads of bands at the moment.

BJ: There was a band who opened up for us in Europe called Horskh, they were amazing! 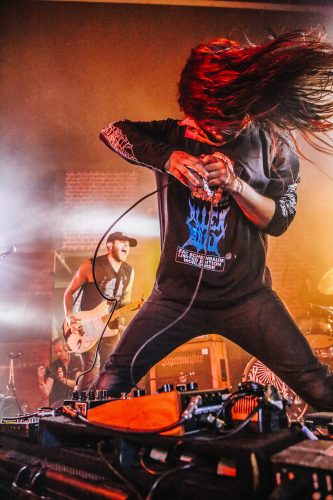 This Feeling Track of the Day: Yonaka ‘Rockstar’