Steve Hewitt has been an extremely busy man since he left his role as drummer of Placebo eight years ago. Having drummed and worked with numerous amounts of bands and names across the world and he embarked on his own project back in 2010 under the name Love Amongst Ruin.  With the band announcinng they will be releasing their follow-up album to 2010’s debut, coming on June 29th – we caught up with Steve to see how everything was going.

Hi Steve, firstly, how are you mate and what have you been up to this week?

Hi, I’m very well thank you. I’ve just got back from Italy where I have been guesting on drums with an Italian band called Spiral 69. I produced their last album and I’ve just produced and played drums on their new single ‘Exile Of The Heart’ from their forthcoming album. We played Bologna, Naples, Milan and Rome. It was a blast, we played some great shows.

Sounds great! You recently unveiled the video for the title track from the album ‘Lose Your Way’, which is set for release on May 11th – what can you tell us about the track?

‘Lose Your Way’ was one of the first songs I wrote for this new album which I think set the bar for the rest of the album. It’s a song about how you can go through life following your goals and dreams, surrounded by friends and family and all of a sudden you find yourself lost and not really sure how you got there and realising that you might have changed as a person more than you think.

Perry Bamonte of the Cure has also teamed up with you in Love Amongst Ruin, how did that come about?

I’ve known Robert Smith for over 15 years and that’s how I met Perry, we met in Paris when The Cure and Placebo were playing some radio show celebration live on stage. We played, then The Cure then we played “If Only Tonight We Could Sleep” together, as some kind of super-group. Perry is a great guitarist but he might actually be playing bass in this new line up.

The album itself is due to be released on June 29th, what can fans expect from it in comparison to the debut?

I think the new album is very different from the first in many ways. I think that I have become more confident as a singer and as a songwriter. The first album was very much a way of me getting a lot of negativity and frustration out of my system and I think it helped a lot. This allowed for me to be much freer as a writer and to move forward into different subject matter. I think the new album is better all round – better production, better ideas and I think heavier and more rock yet retaining some beautiful gentle songs too. 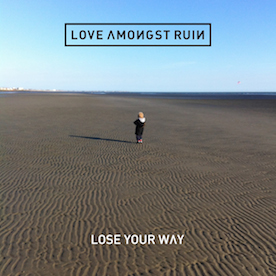 How did you actually go about recording the album?

I wrote the album in pretty much the same way as the first. Just getting ideas together then manifesting them so they become rough song platforms then lots of late nights writing lyrics which I enjoy a lot. Once I felt I had enough material I went into the studio to start tracking drums to the demos.

I started working with Paul Corkett who I usually work with and whilst tracking he suggested I try working with Dan Austin on a track and see how it goes. So I met Dan and we began working on the single ‘Lose your Way’ and we had the best 2/3 days getting that song together. It was amazing fun and really productive so I just asked him if he was up for doing the whole album which he agreed to and off we went. Dan Austin is an amazing guy and a very talented Producer and what I like the most about him is how quick he can work which keeps momentum to getting things done. As a result we finished the album in two and a half months.

It’s safe to assume there should be a tour with the album, right?

I would hope to tour this record so we’ll just have to wait and see how it’s received and see if anyone would like to see us play live.

How would you summarise your experience with LAR so far?

My experience with LAR so far has been great, I’ve managed to embark on trying different aspects of performing singing/guitar etc in public which I’ve seen as massive mountains to climb and I’ve sort of enjoyed it. I have really enjoyed the studio side of it all and the song-writing aspect. It’s felt good to refine how you can express yourself.

Do you feel as though you’ve lived up to those expectations that were surrounding you when Love Amongst Ruin began?

I don’t believe there were any expectations as it was just me saying I’ve always been a writer so let’s try and perform some music in a different way and see if you can do it.

Are there any current bands who are catching your eye at the minute?

What else can we expect from yourself and Love Amongst Ruin throughout the rest of the year?

I hope we can get out on the road and play some great shows. I’ll be doing more production work and doing more drumming with other people and bands too.

‘Lose Your Way’ is released on 29th June