The Underclass are a five-piece indie, guitar driven outfit from Stoke on Trent who are kicking up a real storm in their hometown selling out local venues such as The Sugarmill and The Underground. With four singles under their belt, they have begun spreading their roots and building up their fan base further afield performing live at venues such as The Cavern Club in Liverpool, Jimmy’s in Manchester, Maggie Mays in Sheffield and the Hare and Hounds in Birmingham.

They are set to release their new single ‘The One’ on the 5th February. It is a beautifully melodic, uplifting offering and demonstrates the capabilities and prowess of this promising up and coming band.

We catch up with guitarist of The Underclass Matt Trevor for a chat ahead of the singles release.

Q: Tell us a bit more about The Underclass in terms of your beginnings to where you are now?

A: The Underclass are made up of myself and Dillan Ashton on Guitar, Jorge Wilson as lead vocalist, Aaron Smith on bass and Adam Badenjiki on drums. We started off in a dingy little rehearsal room next to a railway line in Stoke. All of us were either mates of mates or barely knew each other until we started practicing regularly. We started playing open mics, practicing every week until we got our first gig at The Underground on the 23rd March 2019. After that moment it’s just been a blur of amazing gigs in amazing venues, with only 3 days after that we went to Liverpool to play the Cavern Club. Up until the pandemic struck, we were going from strength to strength growing our live following in other cities along with getting supports with idols of the band like Tom Clarke from The Enemy. But despite us being stuck indoors and offstage for the best part of 12 months due to the pandemic, our socials medias have done nothing but grow, leading up to our latest single, which we feel is our biggest yet.

Q: What are the bands musical influences and for those who are not familiar with The Underclass, how would you describe the band’s sound?

A: I don’t think any two members of the band like the same artists, I myself like bands such as Foo Fighters, Guns n Roses and the Eagles. Whereas Dillan Idolises people like Jonny Cash and Tom Clarke. Jorge and Adam are probably the most similar, liking bands such as the verve. With Aaron having the most varied music taste of us all, one minute its Lily Allen and the other its Don Broco!! That being said, all our influences lead to quite a unique sound. With no two of our songs sounding the same.

Q: Stoke on Trent has a great grass routes music scene. How do you think it stands up in comparison to other Cities?

A: Being a band from Stoke can only make you proud of where you come from. There’s a great loyalty in our local industry and people from stoke are by far the nicest people in the world. Our venues (The Sugarmill, The Underground) are unreal and older more established bands like Psyence offer help wherever they can. I do think stokes music scene does get overlooked compared to your Manchester’s and Liverpool’s but the music coming out of our city at the minute is amazing and it will only get better.

Q: With the pandemic still on going, it must be incredibly frustrating not being able to play live. As a band, what have you been doing to stay creative and keep inspired?

A: We’ve mostly been concentrating on the social media aspect of the band, since the start of the first lockdown we’ve gone from around 300 twitter followers to about 2,800, so that can only be good. Along with the nitty gritty stuff, we’ve written some new songs and done a few videos online, one being a live set for “Jägermeister’ which was good fun to do. Most of all, our main efforts have been to try and keep the wheels turning, and not letting the lockdown halt our progress.

Q: Your latest single ‘The One’ is due for release on the 5th February, which the pre order of the 7” vinyl has already sold out. Tell us about the track and what people can expect from the single?

A: We recorded ‘The One’ with Shaun Lowe who has worked at the likes of Abbey Road Studios at Prism studios in Hanley, Stoke-on-Trent. We think it’s going to our biggest song yet and we’re all seriously excited about how it’s going to unfold. We’ve already got some radios lined up for playing it and can hopefully get more onboard once the singles out. We’ve sold out a limited run of clear 7” vinyl on presale and then put out some black 7” vinyl for presale. Which we didn’t expect to sell before the release but they all sold out in 2 hours too! We’re astonished by the support this song has already received and it can only get better from here on in.

For more details about The Underclass: 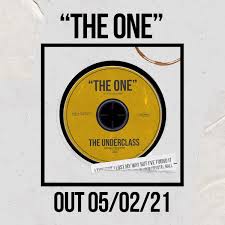 This Feeling Track of the Day: Saint Agnes ‘Repent’