On this cold January night I headed to the Oran Mor to catch Merrymouth and, despite nearly breaking my neck on ice as I approached the venue, the entertainment delivered by tonights talented quartet made the trip well worth taking. Having caught Merrymouth last year when they played Stirling’s Tolbooth, my expectation level was high and once again the band produced the goodies. Consisting of Simon ‘Foxy’ Fowler, Dan Sealey (both of Ocean Colour Scene fame) and also featuring Adam Barry, Merrymouth are a folk trio. Occasionally the trio is also joined by Scottish musician John McCusker and, fortunately for those in attendance tonight, this would be another of those occasions.

Taking to the stage the band appeared to be in jovial spirits and ready to enjoy themselves and, judging the response from the crowd as the band opened with ‘Wenlock Hill’, the title track from their second album, it was clear the band were not the only ones ready for a sing-a-long! The upbeat ‘Salt Breeze’ followed and hearing this infectious track live is a real treat. ‘Sweetest Words’ and ‘Last Train But One’ from the debut album feature early in the set and despite the band only rehearsing once for this gig all sound fantastic. To be honest, the venue, lighting and stage set-up fitted perfectly with the music and, with McCusker adding to the arrangement with his cocktail of violin and cittern amongst other instruments, the music continues to takes on different dimensions throughout the set. 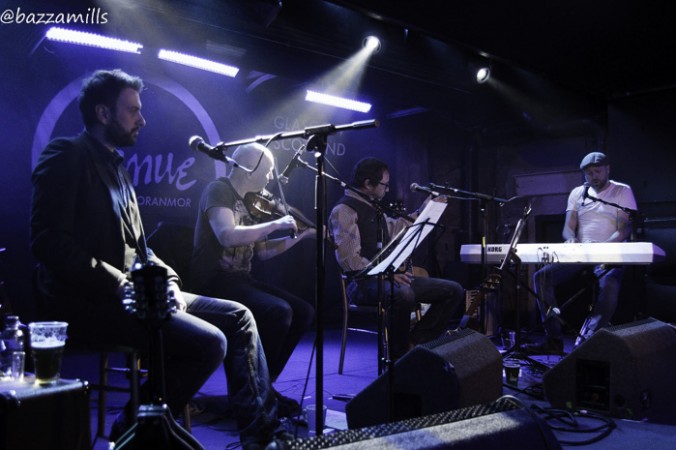 Pleasingly one of my favourite tracks from the debut album ‘Midst Of Summertime’ features and closing my eyes it is easy to imagine such songs around a camp fire in days gone by. The band themselves share some banter with the audience and with each other on-stage, with Dan revealing his own little injury as a result of a slip on the ice the previous night (disoriented by the Scottish mineral water I am sure) as well as trading insults with fellow Rockbottom, Adam Barry. Never to be outdone, ‘Foxy’ Fowler does various impressions throughout including a rather interesting rendition of ‘Summertime Blues’ as well as the ’60s classic ‘Pretty Flamingo’.  With the crowd feeling the magic some laugh a little too loudly (guilty) while others shout for Chas N Dave. Feeling the vibe, the band delights the punters with an impromptu version of ‘Margate’! For those not in the know, Simon also shares the inspiration behind the rather dark ‘Shadow Knows’.

‘Teashop Serenade’ is once again a personal highlight for me whilst my cousin enjoys the version of the Stranglers track ‘Duchess’. Next-up is a cover of the Stone Roses ‘I am The Resurrection’ with Dan Sealey on lead vocals. Seriously, if you have not heard this version…do yourself a favour! Being a huge Roses fan I was skeptical when I read about this on Gigslutz last year but the arrangement is spine tingling. With Dan continuing on lead vocals ‘Mr Marshall’ follows before Simon kicks into the OCS classic ‘The Circle’ – including a wee nod to the Inspiral Carpets with ‘This Is How It Feels’.

With the early curfew the night is then brought to a close with ‘If You Follow’ which Simon dedicates to his mates. Another highly entertaining night in the company of Merrymouth – with the banter well worth the journey alone. Speaking to a few fans after the gig is it clear I am not the only one enjoying the direction Simon and Dan have taken with Merrymouth. Coupled with the three terrific solo albums by Steve Cradock and the accompanying Cradock band tours, fans on these musicians are continuing to lap up the quality music. Next up is the Ocean Colour Scene acoustic tour in celebration of 25 years and I am already buzzing about that one. See you there!