Set in sallow yellow, PJ Harvey and her 10-strong company stand together in an open semi circle. Among them long-time collaborators, Mick Harvey of Bad Seeds acclaim and musical polymath and producer, John Parish (Sparklehorse, Jenny Hval, Perfume Genius, Eels). Tonight, name and rank are of no importance. Tonight, famed punk aggression and avant-garde flair is harnessed and channelled into an unparalleled, utterly devastating performance. With the poise and passion of Funeral/Neon Bible-era Arcade Fire, the emphasis here is solely on the songs and the foreboding shadow they cast over Victoria Warehouse.

Apparently packed past capacity, there’s a sort of weird vibe within the sweaty, skeletal setting of the room. The audience wait in restless anticipation. Drunken folk talk throughout the set whilst others shake their heads. As the band parade onstage and the grinding pace of ‘Chain Of Keys’ begins, the atmosphere then seems to make sense. Harvey’s bleak, no-frills narrations reflect off the cavernous warehouse walls and there’s no escaping them. Many of the tour stops seem to be set in similar confines, marrying with the stark minimalism of the music. The greyscale brick backdrop onstage takes on the frame of both a derelict tower block and interlocked prison bars. Or sadder still, expecting graves. 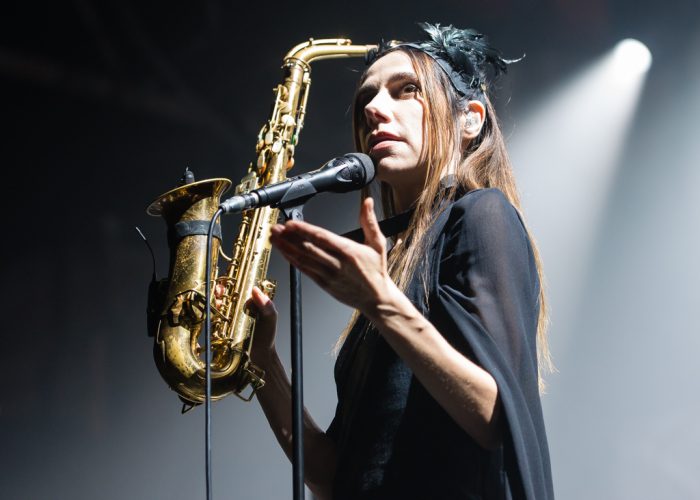 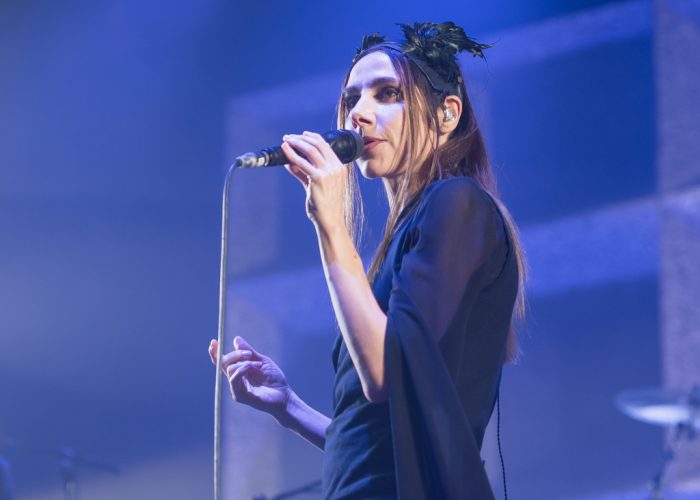 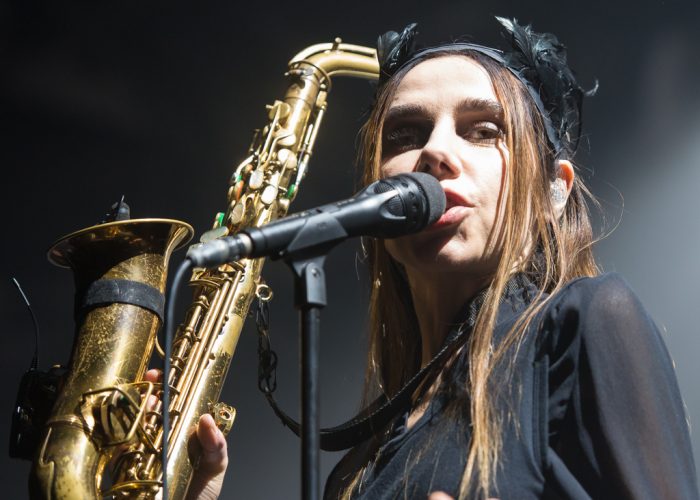 The Hope Six Demolition Project, Harvey’s ninth and most recent release continues along the same anti-war vein as 2011’s rave success Let England Shake. Except this time roads leave England’s Green and point to Harvey and documentary photographer Seamus Murphy’s travels through Kosovo, Afghanistan and Washington DC. The klaxon chord of ‘Ministry Of Defence’ rings out and PJ’s journalistic findings seem to draw many consciences into question. During an explosive, dissonant solo, Saxophonist Terry Edwards (Tom Waits, Spiritualized, Tindersticks) forcefully seems to choke the life out of his sax.

The elements of Hope Six… I failed to connect with are curtailed by the rallying force of these songs live. Harvey’s direct unfolding poetry in The Hollow Of the Hand (her accompanying poetry/photo journal with Murphy) once combined with PJ’s expressive theatrics and penetrating vocals resonate as a remarkable testament to those marginalized the world over. These songs don’t claim to hold the answers, which is partly what makes them so unsettling. 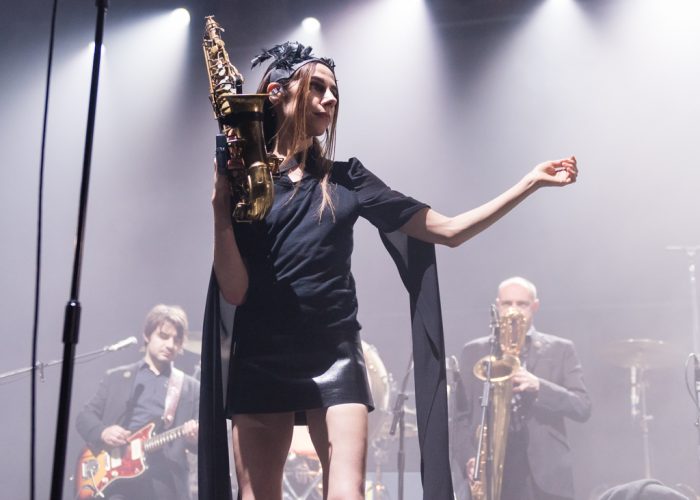 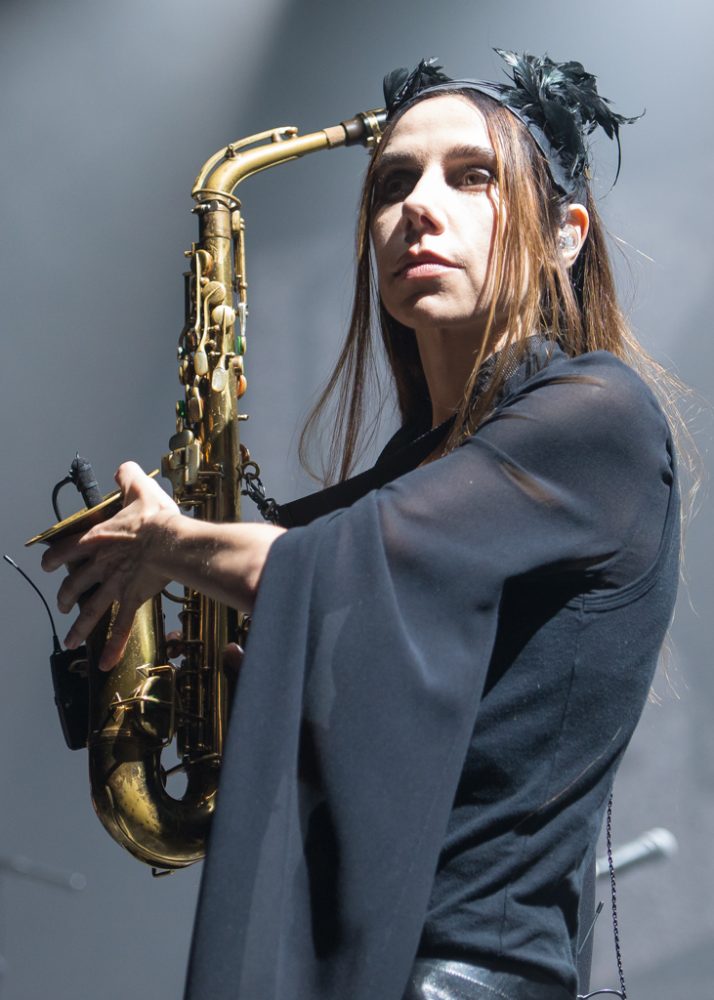 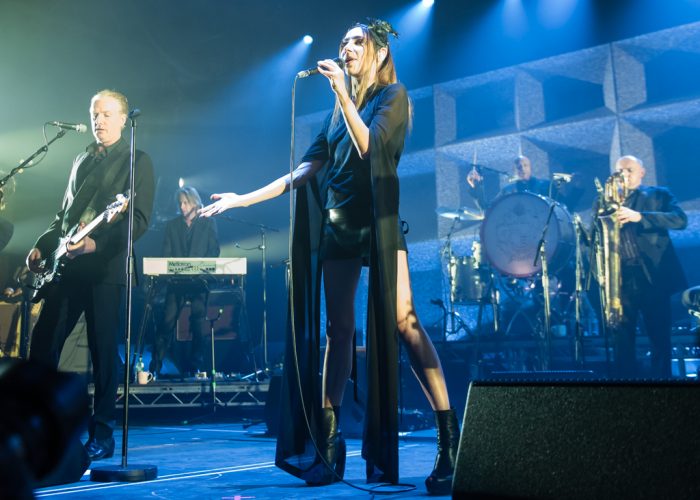 During the cruel clarity of ‘The Wheel’ and ‘River Anacostia’ – which serves to offer the final, finishing blow with it’s dark refrain of the spiritual standard ‘Wade In The Water’ – we can only look on in slight reverence. A release is occasionally offered as the band buck headlong into older favoured cuts, like the throttling energy of ’50ft Queenie’, Dylan classic ‘Highway 61 Revisited’ and the tortured ache of ‘To Bring You My Love’.

Select others such as Anohni, Radiohead and Massive Attack also aim to force the eyes of their audience upon various sufferings and injustices, challenging them not to break gaze. In all her gothic grace, this evening Polly-Jean unites performance and protest in a way I haven’t encountered before. It raises questions for critics, culprits and the conflicted alike. Although it’s easy to get lost amongst the macabre monastic chants and lush push-and-pull of these jazz-punk arrangements, we don’t leave with feelings of elation, more contemplation. “This is how the world will end,” prophesizes Harvey during ‘Ministry Of Defence’. Kindly play us out PJ.

This Feeling Track of the Day : Adrenaline Animals ‘This Is England’