So, here we are, four days into Rebellion festival packed with both quality and quantity. It’s Sunday night, the audience are tired and suffering from festival fever and overindulgence on a grand scale, but just one more band to see before we call it a year and head home for a well-earned rest and recovery period.

There was absolutely no indication that we were about to be blown away by what, in my opinion, was simply the best performance of the entire event, by some margin too.

The Membranes are back with a vengeance. It may be 26 years since their last album, but they have certainly made the most of the break and now look like a bunch of youngsters on the road for the first time. The sound at ‘The Pavilion’ stage also played a part and has been drastically improved since previous years and the master of the stage, John Robb, took every advantage. In modern times (and a lesson to be learned from some other front-men here this weekend), Robb is a master in stage craft, he owns the audience and plays like every gig is his last and he needs to leave behind a long lasting legacy.

It was a set designed to challenge the weary. It was fast and furious, dark and dirty. The opener, the rather lengthily titled ‘The Universe explodes into a billion protons of pure white light’ (that also opens their latest album Dark Light/Dark Energy’) was truly magnificent. Followed by Do the Supernova, Spikes, In the graveyard, Space junk, Myths, Tatty seaside town (Dedicated to Blackpool!!) 21st Century man and Hum of the universe.

Of them all, ‘In the graveyard’ was my favourite. Punchy, heavy, reminiscent of The Birthday Party and Nick Cave in delivery and design, worthy of staying till the end in itself. Of course Robb is animated throughout and even manages one of his many sojourns into the audience for good measure. Well it is a show and he is a showman after all, so what did we expect.

This is not the teeny-bop material of Goldblade, this is special and something to be witnessed over and over again. I take my hat off to you all, the band for delivering the perfect piece de resistance, and the crowd for still being there, on their feet till the very end. Their patience was regally rewarded. See you next year Blackpool. 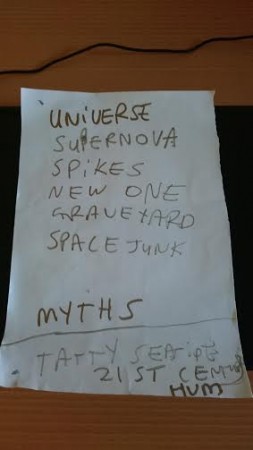