My weekend kicked off in style on Thursday at the Barfly in Camden, with the Man Like Me gig. I got to the venue and instantly fell in love with Barfly when I discovered that I could drink a well proportioned pint of white wine spritzer for a fiver. You can’t go wrong when the night starts with a pint of wine. Classy, I know.

Man Like Me are hard to pigeon hole. If there was a ‘British, garage inspired, feel good, urban, African influenced pop’ category then that would help. Johnny Langer and Pete Duffy are the two full time and original members. They released their first, self titled album in 2009 with their follow-up, ‘Pillow Talk’, coming out earlier this year and I highly recommend it.

Barfly is the ideal venue for MLM, intimate enough that you can get right into the action, perfectly grimy, and it’s in North London, which is where Pete and Johnny are from.

We pushed our way to the front as the band made their way onto the stage. Ade, the flamboyantly dressed soulful voiced extrovert, and newer addition to the set up, arrives wearing, as usual, full African attire, bright yellow, with a huge feather headdress, carrying Jonny over his shoulder. This is how I think I’d like to arrive on stage.  They immediately launch into the catchy ‘Fruit’ and every person in the room is singing (or shouting) along and energetically throwing themselves about as the show unfolds. 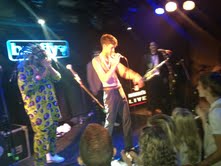 Show is the right word for it really, they bring an incredible energy to their performances, never taking any of it too seriously, like a bunch of insanely talented, handsome clowns singing tunes you feel you know as soon as you’ve heard them once.

‘Peculiar’ was next, one of my favourites, a song about realising that you’re not the young ones anymore and observing all the things that have changed since you were. I also loved the cheeky bounciness of ‘Squeeze’ which is as rude as you want it to be! 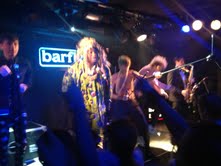 The sax and trumpet players added cool depth to the sound, throughout, their outfits and attitude complimenting the on-stage vibe.

Nearing the end of the set came ‘London Town’.  By now it has become a total sweat box and everyone is loving it, going ‘down down down down’ in unison. The three powerful, unique voices complement each other delightfully.

We left with that elated, post great gig and proper dance, feeling. You gotta get the album AND go see these guys live, too good to miss.

Latest posts by Philli B (see all)

View all posts by Philli B →

Why 1989 was the greatest year ever for music releases