Swiss-American hip-hop group Nefew return with Rise of the Antihero, the sequel to their 2010 mixtape Antihero Begins and the duo’s first full length studio album since 2007’s Off the Cuff. 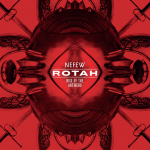 Rise of the Antihero is a record about conquering fear and doubt and finding your own way in life whilst resisting the limitations that are placed upon us by others. The topics of leaving your comfort zone and abandoning apprehensions about your future rule this album and combined with Nefew’s minimal but experimental production, the lyrics are given plenty of space to be heard and have their messages delivered.

Album opener ‘Somewhere in the Future’ is a statement of intent, a message that outlines the overarching theme of the album; that you should keep being yourself and never be derailed by how others perceive you. Whilst dealing with issues of avoiding consumer culture and being materialistic, on tracks such as ‘My Way’, Nefew stress the importance of working hard and appreciating what you have with lines like “rolling through the jungle like I’m David Mann, these couple dollars in my pocket feel like 80 grand”.

‘One Life’ preaches “let it go, cause what the future brings you’ll never know” over the top of heavy, pounding drums and percussion juxtaposed with gentle pianos. Polemikk spits “sometimes there’s no way of knowing where you’re running, so fuck all assumptions” and “only got one life, so before you roll the dice, make sure you always think twice” which deliver two slightly contrasting messages, giving the listener variations of the same idea of living life to the fullest. The first being to follow your heart and take risks, that you will never know what you can achieve without making a leap of faith. The second being that you have to think through your decisions, to make sure you’re completely happy with your plan before you execute it.

Skits are scattered throughout the album, giving human voices to the scenarios and thought processes Nefew talk about lyrically. The skits document the relationship between two men who meet each other in a random encounter at a restaurant, capturing short epiphanies and moments of realisation over the space of two months as one of them comes to the conclusion that he is living a hollow, empty life, working a job simply to pay the bills and getting a kick out of flicking through the Ikea catalogue. In the second skit ‘Tomorrow’, the issues of consumerism arise out in the open for the first time as the two men discuss how “before you know it, you end up with a lot of shit you don’t even need” to fill up our lives and distract us from what really matters.

‘Greater’ is a spacey, jazz influenced track covering the topics of working hard and believing that you are capable of achieving great things by leaving behind the people who hold you back. Polemikk describes the importance of his father’s strong work ethic, without which he would have been broke, but notes that he was taught that money isn’t everything by saying “I’m talking 12 hour shifts at the cable plant, then he taught me money never made a man.”

The intricate, storytelling rhymes mixed with chilled out, atmospheric production creates a unique kind of energy. A vibe that is both optimistic and exciting but also grounded and not driven by greed like a lot of what you hear in hip hop. This album talks about the grind and working hard for what you want, not taking the easy options in life and just letting go of things that don’t really matter whilst also staying true to your beliefs and desires.

View all posts by Ainsley Walker →

THIS FEELING TRACK OF THE DAY: Asylums ‘I’ve Seen Your Face In A Music Magaine’