“Jim’s been writing beautiful melodies for the best part of 30 years. His music is sophisticated, rich and utterly beguiling.”

Jim McCulloch is a singer-songwriter from Glasgow in Scotland.

From his beginnings with BMX Bandits to international success with The Soup Dragons, collaborations with Isobel Campbell and Mark Lanegan to his own ventures as Green Peppers and Snowgoose, Jim is respected by his peers and acclaimed by the critics.

Perfecting his mastery of songcraft, Jim is set to release his debut solo record, “When I Mean What I Say” on Violette Records on 21 May 2021. 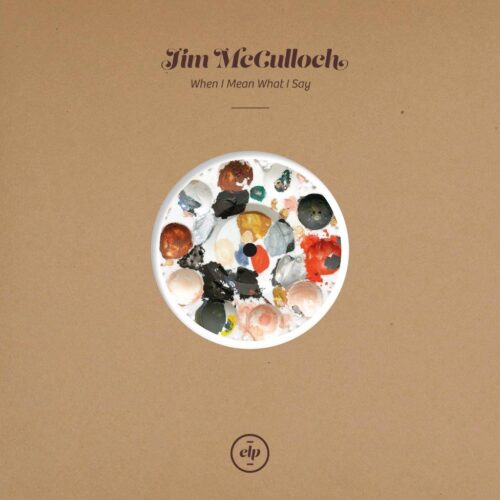 When I Mean What I Say is a coherent and concentrated solo work. Born from Jim’s Master’s Degree in Song Writing following a return to education after 30-plus years, This first truly solo outing is also more intensely personal and honest. Throughout is an artist confronted with sacrifice and crossroads, where art and creativity meet the demands of everyday living and the pressures of family and finance. Having collaborated with big characters with distinctive styles for much of his career, as the album’s nine tracks unravel so too does an unchained musician, an artist who can reflect the class and taste of a lifetime of musical touchstones yet not be defined by them.

The elp will be released on limited edition 10” vinyl and will be preceded by two singles “When I Mean What I Say” on 19 March and “Chorus Of Lists” on 16 April.

“Where do you go when your heart is drenched with pop from the far distant past but you find yourself in 2021? What to do? Escape into music. It’s not easy to do simple but make it so engaging. Jim does it like he was born for nothing else.”

“When I Mean What I Say” by Jim McCulloch is the latest recording released by Violette Records, formed by Michael Head (Shack, The Pale Fountains) and Matt Lockett as a platform for Head’s work and developing into a respected independent label as well as multi-disciplinary event organiser, drawing in outsiders working in music, literature, art and design. The label continues to host live events and recently initiated an elp format (halfway between and EP and an LP) 10″ vinyl series, putting out acclaimed releases by Departure Lounge, The Pistachio Kid and Studio Electrophonique.

Connect with Jim McCulloch on social media at

This Feeling Track of the Day: Seagoth ‘Eternity’

This Feeling Track of the Day: The Native ‘Lost On You’